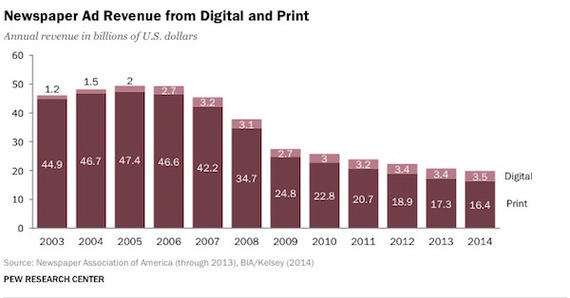 This terrifying graphic came from a Nieman Report on the state of the news business, released last week.

As you can see above, newspapers are now circling the drain.

And all the theoretical discussions about "digital revenue" are not going to save them.

At the end of the day, there is no digital revenue to speak of.

And there isn't going to be.

Newspapers, at least as we know them now, are finished.

And that is a tragedy. No, it is beyond a tragedy -- it is a real threat to a functioning democracy. Because without an informed electorate, democracy is also doomed. It will just take a bit longer.

So what can newspapers do? At least while the patient is still alive? As any good doctor will tell you, reviving a sick patient is a lot easier than restoring one from the dead -- which has not happened in more than 2,000 years, and is pretty unlikely to be repeated.

The solution of slamming the newspaper online is not going to work.

What is needed instead is a complete rethink of what a newspaper is.

And what is it?

It's an institution that goes out into the community, or the world, gathers and processes information and publishes it for the world to see. At the end of the day, it is both a pretty simple and a pretty remarkable institution.

Newspapers are only about as old as the U.S. They were started around the same time. So this is not Medicine, with its 5000 years of history, nor is it Law, dating back to Hamurabi. God did not descend from Mt. Sinai and proclaim to Punch Sulzberger what a newspaper is supposed to look like.

A few years ago, we were invited to work with The Newark Star Ledger to take their newsroom into video. (We have since done many papers around the world -- iPhones make this remarkably simple). Last week, The Star Ledger won 3 Emmy Awards (that would be for television news), bringing their total wins to 22 -- more than many local TV stations.

The New York Times (I was both President and founder of NY Times TV), produces, in my opinion, some of the best "television" journalism in the world. You can see it here.

Where you can't see it (or the Ledger) is on TV.

Which is, when you think about it, crazy.

Because TV is still one of the few places you can actually make money. Cable still pays. TV still pays.

And what it TV news but going out into the community and the world, gathering content, processing it and publishing it -- on cable or on air. Sounds like a newspaper.

In fact, newspapers do the whole thing a lot more efficiently (and a whole lot better) that TV news does. In fact, most television newsrooms start their day by poring through the papers to see what stories they should "report".

So why not cut out the middleman? (The TV networks). Why don't great papers who have real reporting and writing capability give the network news operations a real run for their money? (And there is still a lot of money there).

And it would not be so hard -- at least to get started.

The demand for television content (video content) worldwide has exploded. Quality video content in particular. There are tens of thousands of channels and networks worldwide that desperately need and will pay for content. And where is there great news content? Why, its on all those newspaper websites. All those papers that have begun to play with video - begun to play with it but have no idea how to monetize it.

There's gold in them thar websites.

Suppose we were to aggregate all those newspaper videos into a daily news feed -- license it to networks around the world -- and then split the license feeds amongst the newspapers that contributed? A kind of video syndication.

I don't see why not.

And what do the papers have to lose? The water is already close to the deck. There isn't that much time.

I have put in an application to the Knight Foundation for this idea. (Deadline May 15). I hope they like it!