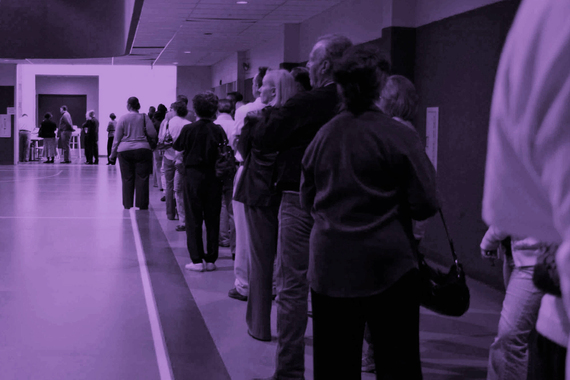 American voting technology is trapped in the last millennium. This lifeline to democracy is kept secret -- closed off from public inspection and controlled by large businesses. It is decades old to boot. Our voting methods ought to be at least as cutting-edge as our selfie apps, but they're not.

Miller and others are on a mission to change that with an entirely new voting infrastructure built on open-source technology. They say open source, a development model that's publicly accessible and freely licensed, has the power to upend the entire elections-technology market, dislodging incumbent voting-machine companies and putting the electorate at the helm.

With Miller's system, we'd still go to the polls to vote and use a machine to cast our ballot. But the software on that machine would be completely open to public inspection. While coders wouldn't be able to edit or tamper with the code, technically literate citizens would be able to, in effect, cross-examine the processes tabulating all our votes, verifying their integrity and assuring accountability.

The organization behind TrustTheVote, the Open Source Elections Technology Foundation (OSET), believes open-source voting software can instill confidence that people's votes are being counted. "Make that machine a glass box instead of a black box," says Miller, who chairs OSET. He says that will get more voters to the polls.

Other organizations like the California Association of Voting Officials (CAVO) are also working to bring open-source principles to American elections. "Every ballot that's cast in the United States is counted by a machine, so we owe it to the voters and the public to use the most secure, most transparent, most auditable technology," says former CAVO President Kammi Foote, who is also the elected registrar of voters for Inyo County, California. "Open source has proven itself in the private sector," says Foote. "Now governments around the world are starting to look at open source as a good business model."

The primitiveness of our voting technology is surprising in an era when we routinely use smartphones, big data is revolutionizing business, and the Internet of Things is spreading across the landscape. As Andrew Rasiej of the Personal Democracy Forum puts it, "Why haven't we been able to apply an equal level of innovation in the way we vote?"

Time and again Americans are reminded of how inadequate our voting technology is. In 2000 it was the disastrous Florida recount, with its infamous "hanging chads." In 2004 it was the Ohio recount. In 2008 a Minnesota recount. There were also problems in the 2012 Republican presidential primaries and the 2013 Virginia attorney-general race, not to mention innumerable, less-publicized local problems around the country.

One reason is that the U.S. elections-administration structure is decentralized and sprawling, delegating control to individual states and cities, which select and buy their own voting technology. Explains Foote, "Different jurisdictions use different technologies according to their budgets and timelines." Sometimes they cobble together several kinds of technologies that only barely meet their needs. With about 180,000 precincts in the U.S., the outcome is a mishmash of machines, regulated by surprisingly few standards. While the 2002 Help America Vote Act appropriated billions of dollars to states to replace their punch-card- and lever-based voting machines with electronic ones, it didn't do much to give them better electronic technology to choose from.

Because the voting-machine market is dominated by just three companies -- Election System and Software, Dominion Voting Systems, and Hart InterCivic -- elections administrators are left with very few options. Without any real competition and regulated by testing standards that are a decade old, incumbent voting-machine vendors have zero incentive to update their systems. According to Foote, "How can they invest in new technologies when they don't know what future governments will allow?"

So elections administrators frequently buy outdated machines, use them for an election, and then store them away until the next one. As Miller puts it, "A voting machine spends most of its life in silence in cold, dark warehouses ... only to be woken up periodically for one day of sheer chaos." And as the machines grow older, the risk of problems also grows. "We're still using 20-year-old technology that we know is problematic," says Foote. If elections administrators could instead pool their resources together to develop free, open-source software, then run it on cheap, off-the-shelf hardware, they could ensure that every jurisdiction, no matter its budget, has the same access to the best voting technology available.

But beyond the decentralized system and the voting-machine market, there seems to be a bigger barrier at play: our elected officials.

The Personal Democracy Forum's Rasiej thinks he knows why so few other elected officials agree with Foote: They're afraid of what they might lose. "Changing the voting system doesn't necessarily benefit the status quo or the people already in office," he says.

Miller knows that fixing voting problems is not as exciting as building or investing in social-media platforms like Facebook. "This stuff isn't very sexy," he admits. Still, OSET has managed to recruit veteran technologists like Hugh Dubberly and Pito Salas, who held responsible roles in the past at Netscape and Lotus, respectively.

While more transparent and reliable polling systems might help build confidence in voting, the processes of democracy also face bigger problems. Elections expert Kenneth Mayer says we need to reform voter-registration and campaign-finance laws, change district boundaries so they do not favor a result for one party or another, and make voting quicker and easier. He thinks the biggest challenge is to ensure that a more ethnically and socioeconomically diverse electorate is represented in U.S. elections. "The problems are not technological," says Mayer, a professor at the La Follette School of Public Affairs at the University of Wisconsin. "Open-source code on a bunch of iPads is not dealing with the underlying issue."

Rasiej believes the real barrier to people voting is that they feel their votes don't matter, that the system is stacked against them long before Election Day rolls around. "That has nothing to do with software; that has to do with a failure of democracy," he says.

Indeed, the 2013 Electoral Integrity Project, a study that scored 66 countries on the integrity of their elections, rated the United States low in categories related to elections systems and structures like "voting district boundaries," "voter registration," and "campaign finance." (The U.S. ranked 26th. Norway, which is already experimenting with open-source Internet voting, was rated No. 1.)

While open-source advocate Miller acknowledges these bigger structural issues, he says he focuses on problems that can be solved in the short run. Redistricting, voter-registration reform, and campaign-finance reform all require legislation and political reforms that might take decades. But open source, he points out, doesn't. "Not a stitch of my work requires a single, solitary act of Congress," he says. OSET expects TrustTheVote technology to be ready by the 2018 election.