The National Mall in Washington, DC is saturated with monuments and museums and, while there is little support for adding more to the Mall, there is support for continuing the tradition of building monuments in the city. While it is a fraught process that requires approvals from numerous agencies and advisory panels, including the Commission of Fine Arts and the National Capital Planning Commission, when well managed with clearly articulated goals, the results can be impressive. Consider the Franklin Delano Roosevelt Memorial located along the Tidal Basin -- that commission was won by Lawrence Halprin in 1974 (though it would be another 23 years before the memorial opened), and the Martin Luther King, Jr. Memorial (also on the Tidal Basin), designed by the ROMA Design Group and chosen from more than 900 competitors. Perhaps the most notable example in the last 35 years is the Vietnam Veterans Memorial, designed by Maya Lin and selected from more than 1,400 submissions. These Modernist insertions into Washington, DC's monumental core were skillfully handled and demonstrated great site sensitivity. The designs also established significant -- and symbolically rich -- visual and spatial relationships with adjacent memorials, thus creating a unique physical narrative of key points in the nation's history. 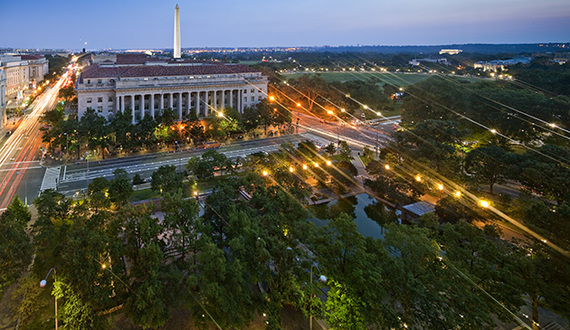 Today the National Mall is at peak capacity and land nearby is being eyed for new monuments, including stretches that run parallel to the Mall, and along Pennsylvania Avenue. One instance of this is the Frank Gehry-designed Dwight D. Eisenhower Memorial, slated for a four-acre parcel (that once housed a community garden) near the National Air & Space Museum, although for nearly a decade its design has been mired in controversy.

Parts of Pennsylvania Avenue between the White House and the US Capitol are also being considered. Recently a competition was announced for a World War I Memorial to be built on a 1.8-acre site across the street from the historic Willard Hotel (where the Battle Hymn of the Republic was composed and, legend has it, the term "lobbying" was invented). But there's one hitch - that is already the location of Pershing Park, a landscape designed by M. Paul Friedberg that opened in 1981, a year before the Vietnam Veterans Memorial. The park, which honors the World War I US General John Pershing, is part of a sequence of parks and open spaces designed under the aegis of the Pennsylvania Avenue Development Corporation (created by an Act of Congress in 1972), which engaged some of the nation's most significant landscape architects and architects (Friedberg discusses his design in this video oral history). 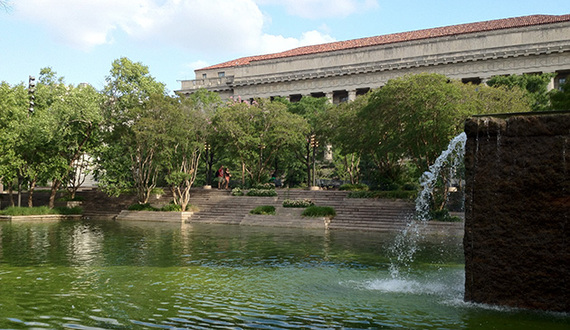 Pershing Park, which is eligible for listing in the National Register of Historic Places, is one of Friedberg's most important extant works and was cited along with Peavey Plaza in Minneapolis, MN (which was listed on the National Register in January 2013) by the American Society of Landscape Architects (ASLA) when it recently announced that Friedberg would receive the ASLA Medal, "the Society's highest award for a landscape architect." 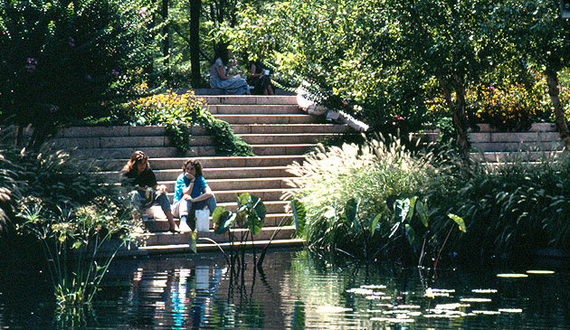 The ASLA announcement noted, "Friedberg has designed public places that not only break the boundaries of traditional design, but also increase the quality of life for those who use these spaces." The park is also significant because of the plantings executed in 1981 by Oehme van Sweden & Associates, headed by Wolfgang Oehme (d. 2011) and James van Sweden (d. 2013), who are the focus of a forthcoming monographic exhibition at the National Building Museum. 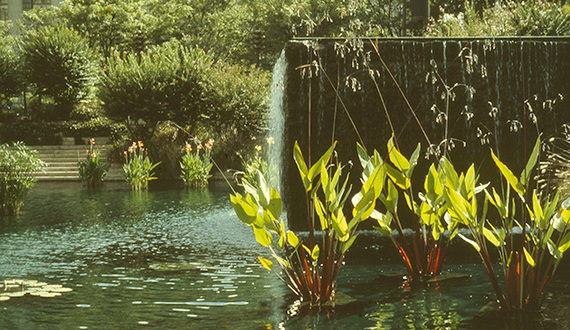 As the firm's three principals recently wrote: "Charged with bringing horticultural design to America's Avenue, [Wolfgang] Oehme and [James] van Sweden humanized the street with color, texture and movement, transforming a hard edged urban space into a lush, green oasis in the middle of the city. [Pershing] Park was one of the first examples of the firm's New American Garden, a signature style that challenged the plastic evergreen look of the Washington city scape in the 1980's and celebrated all four seasons with native, American plant material." Their work can be found throughout the nation's capital including the World War II Memorial, The German-American Friendship Garden, The Federal Reserve Board Garden and Ronald Reagan Washington National Airport. At Pershing, the profusion of plant materials, especially around the signature pool (once used for skating in the winter) also suggested the work of Roberto Burle Marx, the internationally influential Modernist landscape architect.

In December 1981, Washington Post architecture critic Benjamin Forgey wrote: "With its sequence of sloping green areas, cascading stairs and open terraces, Pershing Park is in fact a state-of-the-art demonstration of the lessons landscape architects have gradually been relearning about urban parks." Forgey went on to say, "It will become one of the more active and interesting outdoor spaces in the city because it is superbly designed to attract and to accommodate people in large numbers." 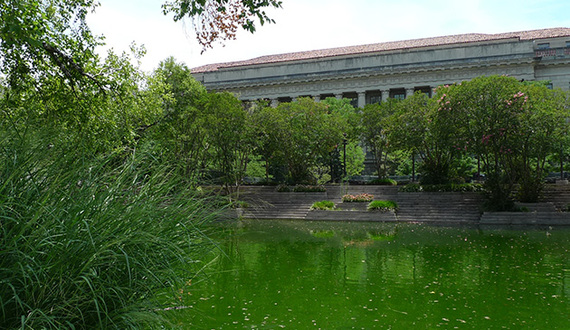 Pershing was one of five newly opened parks that Forgey reviewed. He concluded: "[W]e are being given five tremendous gifts in these parks along the avenue. The whole scheme, including not only the design but creative ideas about uses and activities as well, is a model of sophisticated, enlightened, realistic urban planning. The parks will do a lot to temper the massive mediocrity of much of the new architecture along the avenue, and they can only get better as the years go by."

Pershing is beginning the slow, entirely preventable (and sadly predictable) decline that often results in the demolition of designed landscapes. In the World War I Memorial competition guidelines, a descriptive section labeled Memorial Site tells us: "In recent years, the park has experienced degradation due to failure of mechanical systems servicing the pool and skating rink, and vegetation growth adversely affecting the perceived security and welcome-ness of the park." 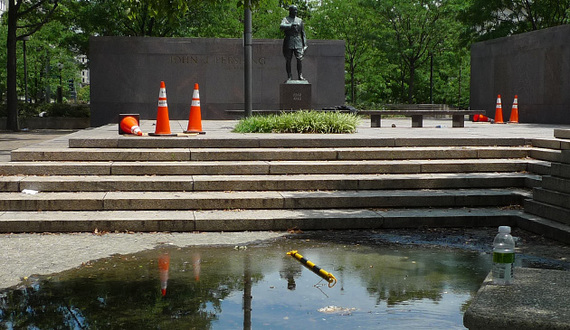 This deliberately inexact but suggestive language is the sort too often used as the prelude to a call for demolition. The park is "perceived" as unsafe and unwelcome; invariably someone deems it "broken," and, therefore, it must be razed and replaced. Rather than being attributable to design flaws though, the "degradation" is actually a result of deferred maintenance. That's the equivalent of denying medical attention and then blaming the patient for getting gravely ill. 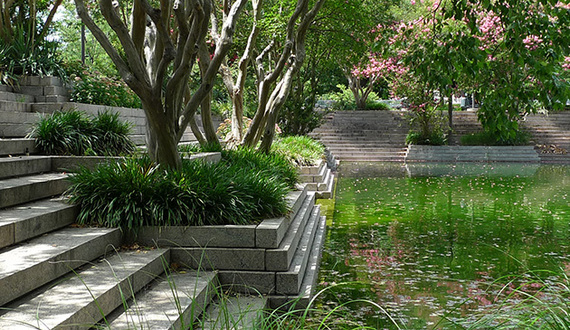 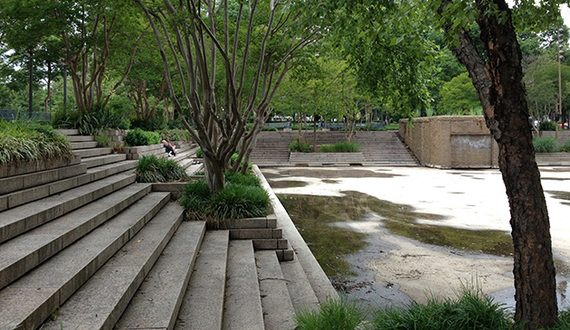 Language from the competition's Design Goals charts a putatively ecumenical course: "To generate a visionary design concept for the World War I Memorial, competitors should thoughtfully consider the range of appropriate enhancement strategies and transformation options -- preservation, alteration, relocation, demolition -- for addressing the Park's physical elements and integrating the existing Pershing Memorial elements and new commemorative features into the site." However, the competition guidelines also state: "The Memorial should be designed to be constructed at a cost no greater than $20-25 million, to be operationally sustainable and to minimize maintenance requirements over time." Knowledgeable landscape architects would tell you that this language and budget translate to the demolition of the existing landscape and the construction of a new work. 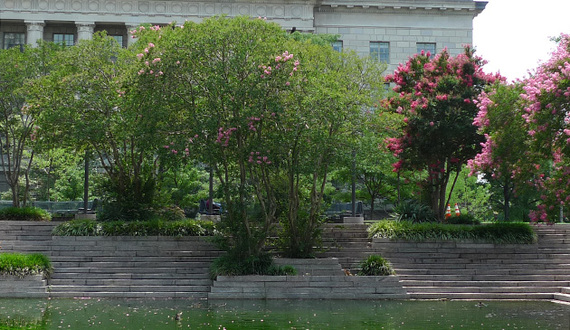 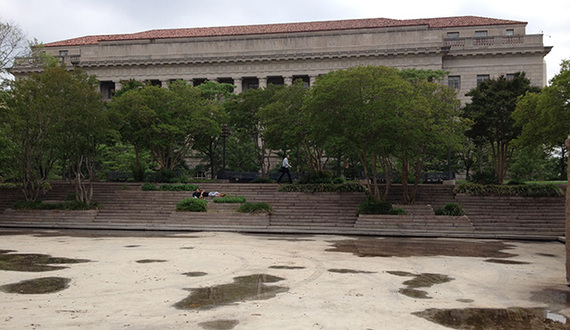 As we approach the July 21, 2015 design application deadline, what responsibilities does the multitude of stakeholders -- members of the World War I Memorial Commission and its judges, landscape architects and related professionals who would compete for this commission, critics and the general public -- have to the design by Friedberg and Oehme van Sweden? By what criteria are the value and significance of this unique, National Register-eligible collaboration by three influential practitioners being assessed? And, is this process being steered towards a false choice: Either approve demolition of the original design or do not build a new World War I Memorial.

It would be encouraging to see entries from landscape architects and allied professionals that honor the legacies of Friedberg and Oehme van Sweden, and successfully nest the new memorial within a rehabilitated Pershing Park.