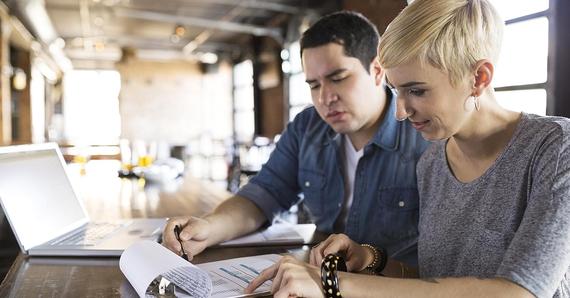 Business owners are generally aware that their decision of whether or not to hire a job candidate cannot be based on discriminatory or other prohibited reasons. For the most part, those reasons are clear and easy to understand.

Ronald Parks, Director of Talent Services at the diversity talent acquisition firm Talent Empire, says "Generally, any employee who will be involved in financial transactions, budget disbursements, or vendor management and selection is asked to consent to a background check and a credit check." These three job functions allow an employee an opportunity to commit theft or fraud. "An employer wants to make sure a job applicant is not having any serious financial issues and they haven't committed any fraud in the past," says Parks.

An employer cannot refuse to hire a person based on his or her race or gender. The picture is murkier, however, when a candidate's financial status is in question, particularly when the candidate has filed for personal bankruptcy. Different federal courts have issued conflicting decisions as to whether employers can legitimately refuse to hire a candidate because he or she has filed for personal bankruptcy.

A business owner would be excused from assuming that can he can decide not to hire someone because of a personal bankruptcy, particularly because bankruptcies are used to justify higher life insurance rates, to deny loans and other financial benefits, and to decline rental applications. The confusion on this matter stems from Section 525 of the United States Bankruptcy Code. Subpart (a) of that section unequivocally precludes agencies of the federal government from denying employment to persons who have filed for bankruptcy. Subpart (b) precludes private employers from using an employee's bankruptcy as the sole reason to terminate or discriminate against the employee, but the language of that latter subpart differs from the prohibition in the former subpart that specifically precludes using a bankruptcy filing as a basis to "deny employment to" a candidate.

Some observers perceive this to be a distinction without a difference. In fact, the United States District Court for the Southern District of New York issued an opinion in a case in which it noted that Section 525 of the Bankruptcy Code was intended to give individuals a fresh start and that giving different meanings to the first two sub-parts of that Section was an "absurd" interpretation.

An opinion from the United States Court of Appeals for the Eleventh Circuit, which includes Alabama, Florida and Georgia, and another opinion from the Fifth Circuit, which includes Texas, Louisiana, and Mississippi, both reached a different conclusion, namely, that Section 525 permits employers to discriminate against job applicants who have filed for personal bankruptcy.

The Fifth Circuit opinion acknowledged that subpart (b) of Section 525 when read in isolation, would seem to prohibit businesses from denying employment on the basis of an applicant's bankruptcy. The Court relied on tenets of statutory construction that required it to read the statute in its entirety. In doing so, it determined that subpart (b) did not include language that prohibiting businesses "from denying employment to" persons who had filed for bankruptcy.

Attorneys who represent individuals against businesses in employment discrimination cases have criticized this conflict between different federal circuits because it provides no clear direction as to the meaning and interpretation of a critical section of the U.S. Bankruptcy Code. The conflicting statutory interpretations adopted by different federal circuits means that cases with identical facts filed in different circuits would have different outcomes. This conflict could be resolved either by Congress's amending and clarifying Section 525 or by the U.S. Supreme Court's acceptance of a case that challenged the conflict and requested a final interpretation of the statute. At least in the near term, neither of these scenarios is likely to occur.

A few elements of certainty can still be distilled from the conflict. First, the confusion applies only to private employers. Government employers and agencies at the federal, state and local levels are barred from denying employment to job applicants because of a bankruptcy filing. Second, a person who is already employed by a private employer cannot be terminated solely on the basis of a bankruptcy filing. The conflicting application of the law applies only to a private employer's decision to deny a job offer to an applicant who has filed for bankruptcy. Third, a few individual states have enacted state laws that prohibit or limit how private employers can use certain information about a prospective job applicant.

Businesses need to be aware of how the laws of their states affect them, and conversely, individuals who suspect that they were turned down for jobs because of their bankruptcy status should consider whether they have a claim under state law.

Within this context, businesses and prospective employees should also understand how a private employer would discover that a job applicant has filed for bankruptcy. Private businesses generally cannot perform a credit check on a person without his or her permission. A job applicant can refuse to grant that permission, but the employer would likely draw a negative conclusion from that refusal.

If the prospective employee does give a private employer permission to do a credit check, the employer must follow a strict set of procedures under the Fair Credit Reporting Act (FCRA) regarding how they get that permission and what they can do with financial information about a job applicant once they receive it. A business's failure to adhere to those procedures can be the basis of a discrimination claim.

Employment anti-discrimination laws are rarely simple and straightforward matters. Businesses that have questions about whether they can request or use a job candidate's financial history, and employees who feel that prospective employer has improperly used their financial information against them, should always consult with an experienced employment lawyer for answers to questions and for analyses of specific facts.