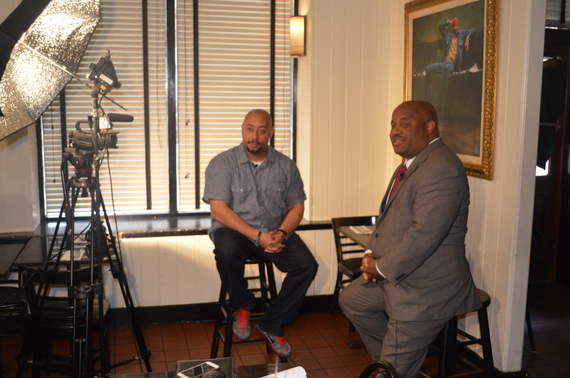 When Raymond Santana walked in the room, the first thing you noticed was that his pleasant demeanor matched his smile.

The last time I vividly remember seeing him is from the notorious "perp walk." Confused, embarrassed, and with his head down in handcuffs under the tremendous glare of media cameras.

Mr. Santana looked like a baby back then. In April of 1989 the Central Park jogger was raped and beaten so viciously that it looked like she would not survive, but thankfully the young investment banker at Salomon Brothers did live. Santana was very young at the time, only 14 years old, but still, one of the notorious Central Park 5.

The jogger's successful struggle for life captivated the heart of a nation.

The others young men charged and convicted: Kevin Richardson, Antron McCray, Yusef Salaam, and Kharey Wise. Their sentences ranged from five to thirteen years. They always maintained they didn't commit the crime though most of them confessed on videotape.

Fast forward to Melba's Restaurant, a popular Harlem eatery, only four blocks from Central Park. There is where I would meet Mr. Santana for our interview.

"It's still a park that affects my life to this day. Since 89, I have never been in that park." Santana said.

To avoid Central Park, Santana takes alternate means, and avoids Central Park at all costs, even when his 10-year-old daughter wants to play, and he only lives four blocks away. Santana told me:

"It's still something I still have to deal with every day. I'm no longer Raymond Santana, the childhood friend, the cousin, the next door neighbor; I'm Raymond Santana Central Park 5. So that label will never go away. That label will always be there until I go to my grave. The only thing is that now it stands for something a little more positive."

What does that label, Central Park 5, mean, I asked?

"Back in 1989, we were the worst human beings on the planet earth." Santana said, looking me right in my eyes, with his voice rising.

The media was in a frenzy, and that's putting it mildly. Headlines on a daily basis were basically a variation of one term "Wolfpack's prey," sprinkled in and to be alternated on some days with "Teen Gang Rape Animals." Donald Trump called for restoring New York's Death Penalty, and still doubts their innocence.

Santana says he's not bitter on being cleared, but stated he has to always be on his toes. Choosing his words carefully, he said he finds it difficult to believe that he no longer has to fight the case. All he had left was to fight. He talked about how every day for years he would wake up ready to demand his justice, ready to tell his story. That could mean talking to school children one day, or a media interview proclaiming his innocence the next.

Of the $41 million settlement with the City of New York, Santana put it this way:

"Money at this point wasn't the object. For us it was about the closure. Now that we reached the closure, what do we do next? So the money really goes more to my daughter. It secures her future. It gives her a chance. Whatever we decide to do for the kids in the community, it gives them a chance. But what does it do for me? I'm about to be 40 years old."

Yes, Santana says some of the money will go back to the Harlem community.

Santana says the case was so overwhelming some of his own family members thought he was guilty, and that's why he couldn't make his bail, but Santana quickly added false confessions happen all the time, pointing out he was in a cold room with prosecutors and police for 15-30 hours with no food, and no sleep. You can see part one of the Raymond Santana interview here, part two here, and the segment with lawyers Richard Willstatter and Marc Fernich that followed on RNN-TV/FIOS News indicating false confessions are real.

The Central Park case took a tremendous toll on the families. Santana's mother died of cancer while he was in prison, and from that night in April of 1989, it was very tough for his father, though things have turned around in a positive direction.

"He's a proud man. Back in 89, he went through so much. He got ridiculed at work, he got ridiculed in the neighborhood, he developed a drinking problem, and now he has done a 360."

As for the Central Park jogger, Santana says he would like to meet with her one day.

"I know she has a lot of questions that she would like to ask. I feel she was victimized twice. Not only by Matias Reyes, (who confessed years later, and his DNA tied him to the case) but by the people who she befriended who told her this lie all these years, and I still believe to a certain extent she still believes it."

Santana and the others have been tortured souls for a very long time. Santana had hit rock bottom.

This conversation in particular always happened when it came to employment, whenever Santana tried to get a job.

"I filled out numerous applications. When they say have you ever been convicted of a crime? Yes. What is that crime? Rape in the first degree! There is no job."

Santana was real, telling me that in prison to be labeled a rapist, the only thing that is worse in terms of horrible treatment from fellow inmates is that of a child molester. What was the worst part of this experience?

Santana paused, looked down, and let out what was almost a nervous little laugh:

"Besides going to jail and losing my freedom?" He said.

One could sense the sarcasm but this was as real as real gets. He was speaking from the heart.

Santana now has a job, working for local health care union 1199 in New York City, and he doesn't plan on retiring so fast, even though his new found title is that of millionaire.

He says employment is part of his healing process. In his words, being able to put food on the table, to pay bills. You could hear the pride in his voice that every family provider has.

That's when it hit me. I was looking across at a person who never had the opportunity to even attend a school dance, and yet, Raymond Santana could still smile.

After the stigma, the pain for their families, and all these years of being labeled rapists, these five young men can begin to put the terrible ordeal in the past, an ordeal that tagged them and scarred them for life.