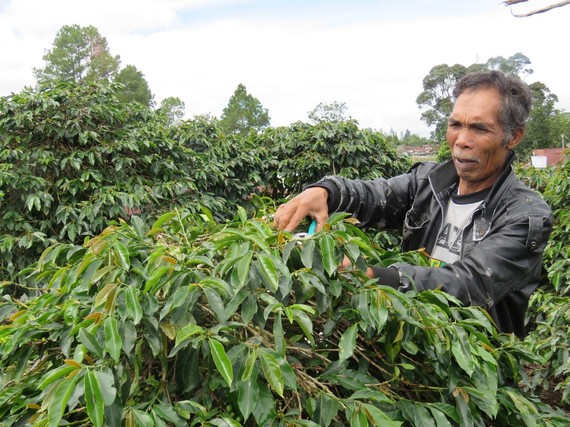 Dugar Lumbagaol, a 62-year-old father of five, started farming coffee fifteen years ago in the North Sumatra village of Hutajulu. Before becoming a coffee farmer, he earned a modest living trading rice in Tanjungbalai, 200 kilometers (124 miles) away from his hometown. After several years of making meager profits in rice, Dugar gave up and returned home to try his hand at coffee farming.

Dugar is not the only farmer Lutheran World Relief (LWR) has worked with who turned to coffee as a last resort. "Coffee farmers cannot be rich," asserts Beslin Sitinjak, a farmer participating in LWR's coffee project in North Sumatra. Many farmers believe that producing coffee will not earn them enough income to purchase anything for their families beyond the barest essentials. They also do not wish for their children to follow in their footsteps, laboring to produce coffee for a market that is often unfair to individual farmers. LWR, through its Ground Up Coffee and Cocoa Initiative, wants to show Indonesian farmers that farming coffee isn't a last resort, but a profitable livelihood.

One strategy to improve farmers' and farmers' organizations (cooperates and farmers groups) production capacity, access to competitive financing, and partnerships with buyers is LWR's annual Temu Kopi Forum, which brings coffee farmers together with local and international buyers and financiers for two days of networking and workshops on issues facing the coffee industry, such as climate change and methods for improving coffee quality.

Another strategy is to directly train coffee farmers in field schools on new inputs, tools, and methods in order to increase their farms' productivity and coffee quality, which in turn increases their income. Most small-holder coffee farmers often lack strong farm management skills and as a result, produce less than 700kg/ha of coffee per year. LWR field schools train farmers on farm operational and financial management to ensure the sustainability and profitability of their livelihood. Dugar, who has participated in one of the field schools, has noticed that his newly acquired pruning skills have improved the productivity of his coffee trees, and he is more confident in his livelihood choice to become a coffee farmer.

Dugar only laments, "I wish I were younger, so I could practice what I've learned longer and earn more money since I am able to produce more."

Through connecting with more buyers and improving their coffee's quality and quantity, farmers are empowered to negotiate higher prices for themselves. Dugar hopes, "With better prices for my coffee...I can ask my son to come home to become a coffee farmer."

Originally published at agrilinks.org, an online publication of the U.S. Agency for International Development.