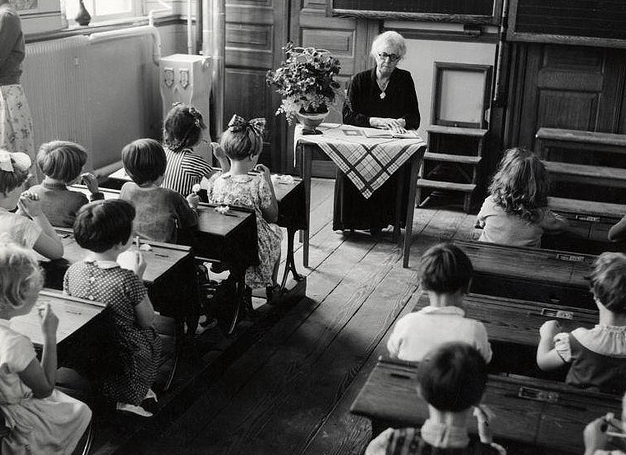 Most classrooms have come a long way since this picture was taken. Or have they? (Flickr Creative Commons License)

Sometimes I think there should be a big sign in front of some schools saying, "Welcome back to the 20th century."

True, virtually all schools have computers these days and many are equipped with smart boards and broadband access. But in too many classrooms the basic method of instruction is much the same as it was when I was in school -- a teacher, aided by books and now electronic media, imparts knowledge to the students, who regurgitate that information back in the form of tests. And a series of standardized tests are used to measure the school's performance and help determine the students' chances of getting into a good college or finding a job.

But just as online news, music and video helped revolutionize the media industry, we are starting to see significant changes in education.

One of my favorite disrupters is Khan Academy, a Mountain View-based nonprofit organization founded in 2008 by Salmon Khan. The site provides free self-paced lessons on a wide variety of topics, often in the form of a "chalk-talk" narrated by Khan or one of his colleagues. In addition to all the typical K-12 and college topics, there are educational videos, including "American Civics," where you can learn about the fiscal cliff, the debt ceiling and "Obamacare." It's worth a look even if you're not in school.

It's also increasingly common for teachers to create their own videos that students can watch at home, freeing up classroom time for students to interact with the teacher and each other. Stacy Olson, a 5th grade teacher at Ross School in Ross uses a technique called the "flipped classroom," where instead of teachers introducing new material in class and assigning homework to reinforce the lessons, the classroom is inverted so that students use online video and other resources to learn at home -- at their own pace -- and use classroom time for teachers and peers to reinforce the lessons.

Olson uses Educreations Interactive Whiteboard, a free iPad app to record herself giving math lessons for her students. The app lets you record your voice as you draw on the screen, enter text or import photos from the iPad, the iPad's camera or the Web. It lets anyone create videos similar to those used by the Khan academy. I tried the app and was impressed at how easy it is to get started.

Olson breaks the kids into groups where they work at their own pace, which she said "helps build 21st century skills of collaboration and problem solving." Olson's students also use Educreations to record lessons for their peers. "Sometimes the students' videos are clearer and more concise then mine," she confessed. But that's something to be proud of. Helping students to be creators rather than just consumers is part of what it means to be a great 21st century teacher.

Both Olson and her students post some videos to Edmodo, a social networking site designed to help students and teacher "connect and collaborate."

We are also seeing an increased use of social media in classrooms. "Web 2.0 as a Force for School Transformation," a 2010 report from the Consortium for School Networking, highlights the benefits of participatory learning.

The report quotes from vision statement from the Birdville, Texas, Independent School district that "All students succeed in a future they create." Instead of banning services such as Facebook and YouTube, the district encourages the use of social media because "social linkages that are used so extensively by kids when they are not in school can be put to extremely productive use as resources for classroom learning." The report also cites work at Westwood Cyber High School to combat a high rate of student dropouts. The school, which serves "at-risk" students, makes extensive use of social networking to support "the learning community."

Educational technology is also having an impact on colleges and universities. Last week, GigaOm Pro released its report "Disrupting the university: near-term opportunities in the digital learning market." The report stressed the importance of "adaptive learning," which refers to technologies that alter how material is presented based on the student's performance and learning needs.

I spent the early part of my career as an educational reformer, helping to encourage student-initiated learning based on student needs rather than institutional requirements. There's been some progress but we've also seen a lot of pushback lately thanks in part to our nation's obsession with standardized tests. But I'm starting to regain hope. Technology won't solve all of the problems of education. But in the hands of creative, talented and caring teachers and learners, it can help.

This post is adapted from a column that first appeared in the San Jose Mercury News and also on SafeKids.com