Yes, there is something even more popular than the World Cup in Latin America: it is the Telenovela -- with its legions of obsessively addicted fans tuning in every weeknight. No longer just a guilty pleasure for drama-loving housewives, the Telenovela has evolved to appeal to whole families, attracting up to two billion people from around the globe. That immense platform gives Novelas the unique ability to shape how people think in a way that other media have rarely been able to do. Frustratingly, too few have used this ability to promote equality and tolerance to an audience that is historically intolerant.

According to a 2012 HRC report, a woeful amount of hate and violence is regularly directed toward LGBT people in Latino communities. This stems from rigid, outdated gender roles with little tolerance for anyone who is not a straight man brimming with machismo or a subservient woman. Oh, and because everyone and their mother is a hardcore Catholic, adding an all-too-familiar intolerance often rooted in religion for LGBT peoples.

This culture of homo- and transphobia can be deeply ingrained in many conservative Latino families. Take mine: some of my relatives, love them as I may, are quick to yell "faggot" at their TV when an effeminate man appears onscreen, and they have spent most or all of their lives lived in L.A. -- one of the most LGBT-friendly cities in the nation. My own father watches up to four hours of Catholic programming on any given Sunday (a truly astonishing feat, trust me) and interprets the Bible very literally. So how can a set of principles so central to generations of Latinos possibly be challenged?

With addictive, melodramatic Telenovelas, that's how.

I didn't realize the power of the Telenovela until I sat beside my sister and my beloved, yet conservative mom to watch Que Pobres Tan Ricos, which began airing in early 2014. The hilarious and heartwarming novela, from producer Rosy Ocampo, features a gay relationship between two fully evolved, three-dimensional male characters. I had never seen such a thing in a prime-time Telenovela.

In an interview, GLAAD's Spanish language media strategist Janet Arleis Quezada told HuffPost that liberal audiences "want to see more of the world they know reflected in the stories they watch including people of all colors, histories, orientations, and gender identity and expression," prompting networks to take some risks in addressing the Machismo and religious zealotry that exist in Latino culture.

It wasn't until very recently, however, that novelas became serious about tackling homophobia. Many "imported shows broadcast in Spanish still continue showing old stereotypes, or shy away from showing real relationships," Quezada added. The first lesbian kiss on U.S. television aired in 1991 on L.A. Law, while the first lesbian kiss in Latin America didn't air until 2011. The first gay wedding on U.S. television was also in 1991, while the first in Mexico was just last year. Telenovelas may be light years behind the visibility that LGBT communities have achieved in progressive media, but it's all starting to change.

My mom uttered a shocked "Oh my God!" when she became aware of the budding gay romance on Que Pobres Tan Ricos to signal her discomfort. But that didn't stop her from watching every single night. There she was, a member of a generation that can often shame unorthodox thinking, totally invested in the gay story arc. She was hooked because the characters are more than just gay: They have passions, drama, career goals, family issues, financial problems, experiences everyone can relate to. 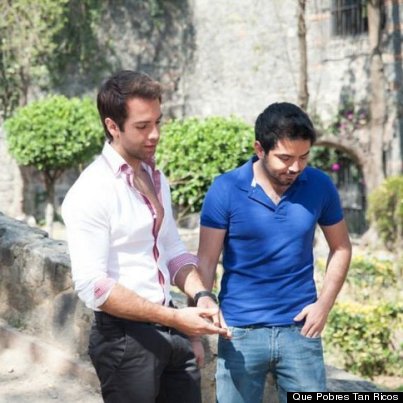 Now, my mom tells my dad, "Hey Papi, you don't have to criticize people, just live and let live" if he yells "faggot" at the TV screen, and he listens. The level of discomfort with LGBT topics in my house has plummeted, and my family loves novelas so much so that we often postpone prayer time in order to watch (this never happens otherwise). That is how powerful they are.

The fact remains that LGBT people are only properly portrayed in a staggeringly few novelas. The majority of the melodramas simply fail the LGBT community and larger Latino community with either two-dimensional, frequently disparaged LGBT characters or a world simply not inhabited by LGBT characters at all. Perhaps it's because they are too afraid to challenge the conventions of past generations or because they are just uninterested in doing so. Whatever their reasons, it is a ridiculous waste of potential. These engaging, influential stories are just reteaching the same lessons Latinos have been hearing for years: "Have faith and your problems will be solved," "Be loyal and you will be happy." Why can't they teach these same lessons with LGBT characters, or teach entirely new lessons as well? Including LGBT characters certainly will not negatively affect ratings -- Que Pobres Tan Ricos has proven that.

"As Latinos in the US increasingly support LGBT issues, especially in the younger demographic, more people are realizing that they know people who are LGBT and want to see that reflected in the media," said Monica Trasandes, GLAAD's director of Spanish-language media, to HuffPost. "As laws and cultures change in Mexico, Colombia, and Brazil where many of these novelas are produced, we should see more realistic portrayals that engage all fans."

We need more novelas like Que Pobres Tan Ricos to challenge long-standing traditions of religious intolerance and machismo culture that many people still follow. We need novelas to show people how to compromise old dogmas and learn to respect other human beings despite their differences. We need them to help in the battle against sexism. We need to open the minds of Latino families because "less than half of LGBT Latino youth have an adult in their family they can turn to if worried or sad". Latin America cannot continue to exist as a giant bubble of intolerance, it has done so for far too long.