At the close of the Second World War, an obsession with the Existentialist philosophy of the human condition began taking hold of artists and intellectuals, as it would for the succeeding two decades. In retrospect, it is hard to imagine another philosophy either possessed of the enormous reserve of literary and artistic expression, or capable of branching off into both popular and intellectual cultures, in the manner that Existentialism could and did. No other philosophy of the time had the capacity for disinterring and then analyzing the deeply buried contradictions and values that enabled the world's religions and ethical systems to cave in to fascism. And Existentialism's focus on individual freedom and responsibility made it a heroic moral responder to the combined atrocities of the Nanking Massacre, the firebombing of Europe, the Holocaust and death camps, the incineration of Hiroshima and Nagasaki, the forced labor and genocide of the Gulags, and the virtual devastation of the old economies, laws and moral authorities that were leveled with the war.

Too richly complex and purposefully contradictory to become a social and political ideology, Existentialism's various manifestations in the hands of writers and artists can't be reduced to slogans and banners, programs or campaigns. And yet, for the next two decades, Existentialism is summarily made the Leftist intellectual's alternative to the failed and corrupt state-sponsored ideologies taking title to Marxist Socialism and Communism. As for the visual arts, Existentialism manifested in art politically by responding to the individual's crisis of responsibility when forced with the choice between tyranny and death. 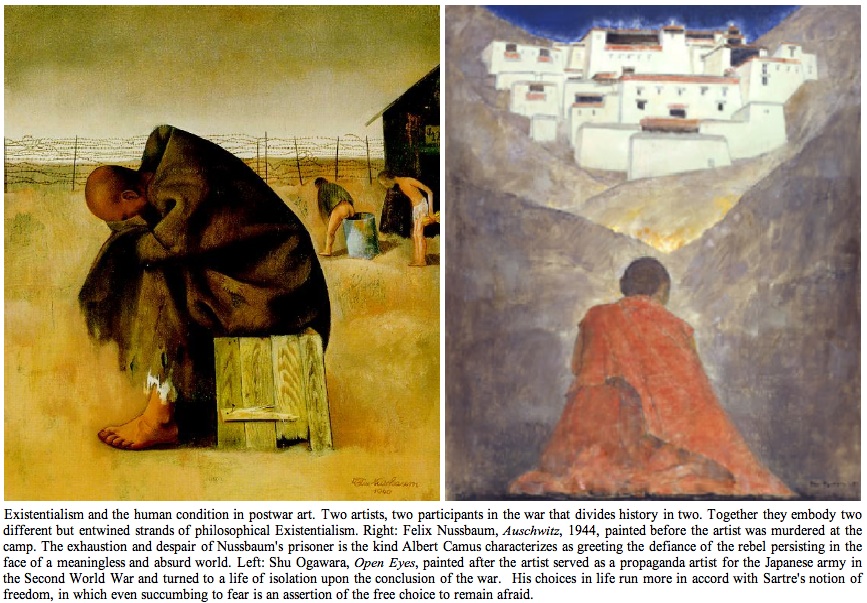 While writing about Existentialism in art for a Huffington Post political timeline of the art of the Left, I came upon two paintings of remarkable power by two accomplished artists best known for work made during the war. That they were from opposite sides of the globe and had played very different roles in the life-and-death dramas unfolding in Europe and Asia, made them seem even more perfectly suited for embodying the Existentialist capacity of finding ethical clarity amid irreconcilable aims and ideals. An unexpected and remarkable surprise came in discovering that, despite one of the artists having been a victim of German fascism and the other an admitted, unquestioning collaborator with Japanese despotism, both had managed to paint pictures that conveyed enormous psychological and spiritual anguish contributing to their subjects' collapse.

Felix Nussbaum in Germany and Shu Ogawara in Japan had both practiced pictorial Surrealism before the Second World War. Both resort to realism for its provision of more direct, rational and immediate insights to the human condition after finding that their lives and ambitions have been circumvented by wartime circumstances outside their control.

In the painting to the left above, Felix Nussbaum has painted a prisoner of the Auschwitz death camp while he himself was interned at Auschwitz. The prisoner may be praying, or he may have arrived at that despairing nadir by which he loses his identity, and with it his will to live. Sartre had to write in words what Nussbaum here conveys in a gesture: "Is there sense in living, when there are people who beat you until your bones break?" Painted at Auschwitz in what little time he had to live, Nussbaum's responsibility had been reduced essentially to choosing what kind of death he will die: that of the collaborator (yes, there were Jewish collaborators even at the death camps), or that of the man of conscience.

On the right, Shu Ogawara, an ertswhile Japanese soldier, has depicted a Buddhist monk praying before a mountain monastery. By the signs of his strenuous climb for isolation and assumed position of humility, he too appears to have been broken by some weight of events. The responsibility of the artist-subject is found in choosing what kind of life he will live since the war's end. Newspapers and blogs report that Ogawara had succumbed to the life of the collaborator, and in later decades he came forward and announced publicly, and without pressure, that he has had to learn how to live with the shame of a history made worse by knowing his youthful wrongdoings.

By now it must be clear that I've assumed that both of these paintings are self-portraits. Any viewer would be wise to question the assumption, given that the identities of the prisoner and the monk are obscured. How would we interpret the subjects were we to come upon the work without knowledge of who made it or where?

Would we see in the obscured identities of the prisoner and the monk the self-portraiture of the artists' inner states of being at the time the paintings are made? Or would we see some aspect of our own experience of anguish in the place of the paintings' pictorial circumstance?

We certainly would see that Nussbaum's subject has buried his head in a blanket, while Ogawara is presenting us his subject's back. Do these gestures convey the desire for invisibility? Of hiding? Of covering some shame? The monk is kneeling, an act of humility, but one offered not just to some God. Our relationship as viewers of this picture demands that we understand that it is from us that the subject asks something. But what? Atonement?

By contrast, Felix Nussbaum's prisoner seems to ask nothing from us. He only presents the fact of his existence. It matters little to the Existentialist reading of the picture whether the prisoner's existence is his last shred of defiance to the hostile forces who finally succeed in destroying him, or if he is merely too exhausted to think. For to the Existentialist, they are one and the same. Just as for the Existentialist, the exhaustion and the anguish of the monk is his plea for atonement, however unconscious he is of it.

There is also the issue that the preferred signifier of the self is always disclosed by a rendered figure that occupies the foreground and center of its composition. On the other hand, the combined effect of the obscured identity of the painted subject and his position at the center and foreground is one of mutual negation--of the theatrical central focus, and of the anonymity of the depicted protagonist, canceling out each other's conventional meanings. Our alternative is to reach for a meaning that isn't conventional, which is what the Existentialist forces us to do.

In making the choice to place the obscure protagonist at the center of a picture or drama, the Existentialist devises two sides of the same human condition: the Stranger and the Everyman (or Everywoman). To the Existentialist, we are simultaneously Stranger and Everyman. At its source in the human psyche, the motif of Everyman is generated as a wish by the individual to belong, to find identity in some all-encompassing universality. But that is because we are strangers to ourselves, and in our caution, strangers to others. Translated into logical terms, the simultaneous depictions of the Stranger and the Everyman must also make a self-portrait, just as every portrait an artist makes is to some extent a projection of the self. It's a circular argument, yes, but one that assures us that everything each of us makes has to be about ourselves.

Of course in the case of both these paintings, we do know the circumstances of the paintings and their makers. And because we know, we find ourselves in the presence of highly emotional, ethical, and politically charged art (or, in this case, it's reproduction), especially for those among us who lived through the horrific events. Questions now arise. For one, should we regard the paintings as not just works of art, but as evidence in two separate crimes? Should Nussbaum's refusal to collaborate make us want to isolate his painting from Ogawara's painted renunciation of his former collaboration?

Unlike Nussbaum, Shu Ogawara is not a victim of an obscene cruelty directed at him. He has been a propagandist for the Japanese army at the height of its aggressions against the Asian-Pacific populations and later the US armed forces. His job has been to lie to Japanese soldiers like himself; to tell them through pictures that they are winning the battle and the war when they are really losing it. Nussbaum has had abject humility forced on him. Ogawara, as a conscript who would have been sent to the front lines if he refused to paint propaganda, has had profound guilt forced on him, but he has also been rewarded for his collaboration with his life. Both have watched hundreds, perhaps thousands die. Nussbaum dies at the camp with them. Ogawara, in league with every soldier who has ever faced combat, feels some part of himself die in the war. But is that enough for us to forgive him? Are we even in a position, morally, politically, to forgive him?

In the end the men cannot truly be compared, as their circumstances cannot. We don't know when one aided people and when one acted against them. We aren't presented with the men--only their art about the human condition. And that we can compare. By seeing in each picture a testament of an identity largely chosen for us at birth--but in a climate of freedom also affording us a choice of identity in the wisdom accumulated with adulthood--we see how identity and freedom are the central human conditions governing the quality of a life. Nussbaum was denied that choice. Ogawara was granted it only after he served a will more powerful than his own. In this, their art tells us everything that we share with both men.

Now read the author's Political Timeline of the Art of the Left.