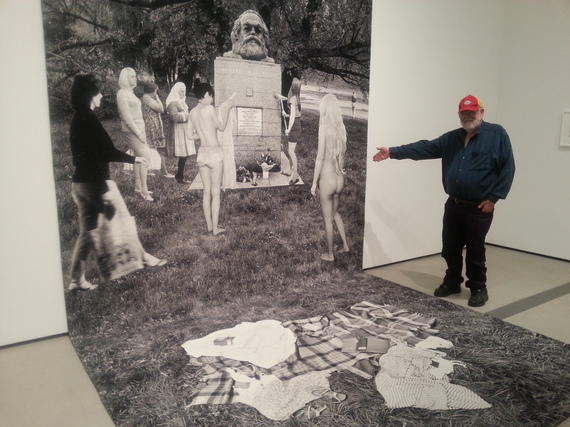 I have to admit that as a partisan of so-called "classical music" and great writing as summed up by the likes of Mark Twain and Beethoven, I've never been particularly impressed by modern art or grants-supported "serious music," forms of art mostly appreciated by the academic world.

When my friend Anthea Raymond, the famed broadcaster (she ran KPCC for a while) and editor, invited me to see the Broad Museum on Grand Avenue in downtown Los Angeles with her, she was expecting to see my antediluvian ways.

Raymond surely wanted to introduce me to the Broad Museum even before I had my "minor stroke." I assured her I was coming, despite the weakness and pain. I was curious if the Broad could at all compare to the Tate Modern I saw in London right after the Millennia.

The trip did indeed tire me out far more than it should have. But I felt good. I felt some of that same wonderful feeling I had just after the beginning of the first year of the new Millennia when I went to the Tate Modern in London.

I realized that much of the world -- including, no doubt, Anthea -- regarded my whole attitude to "modern art" as hopelessly reactionary although I think my ideas are actually quite progressive. To my mind, Ludwig von Beethoven and Mark Twain are, in my mind, the same artist. Their work sums up the fall of feudalism, of clergy, by liberating the music and writing that unveils the truth of science and democracy. I must admit I did mention this idea to James Ellroy, Los Angeles misery writer of note, who agreed with me only about Beethoven, but not Twain, who he plainly did not like.

A lot of my attitude toward modern art was summed up by a wonderful movie called Me and Orson Wells. In that movie -- which was about Orson Wells doing Shakespeare for a WPA theater -- an angry William Randolph Hearst character was complaining about the mural Diego Rivera did in the lobby of Rockefeller Center. He insisted that he was particularly upset at the Leninist mural which went up in 1932, and was dismantled by 1934. The Hearstian figure was angry not just at Rivera, but all the other expressionist artists. He was telling his publisher friends that they needed to create a new mood for the 1950s -- he wanted artists the likes of Andy Warhol and Jackson Pollack who had nothing to say, especially nothing political.

The Hearstian character wanted to end the radicalism of modern art from the '30s and '40s, and replace them with his alleged luminaries.

It's fair to add that when Beethoven died, more than 30,000 residents in Hamburg turned out to celebrate his passing -- back when there might have been been that many denizens living in the city. Thousands of people turned out to hear Mark Twain when he gave his lectures in the Mother Lode.

But I began to get a sense of what "real" modern art can be by a brief visit to Tate Modern, not far from the Thames in London. I found a museum full of light and mechanics and cars and giant pianos hanging from ceilings as well as Edward Weston and Diego Rivera, technology and war. I think I quickly began to understand the real problem was American modern art. Hearst was the man who created modern art and was not just the dead stuff to be found in modern art houses and the like. Most of that American art scene is kept alive by ugly meaningless art pieces most of whose audiences arrive in BMWs.

The problem was Los Angeles, I suspect, and probably New York, but not London.

But Anthea was right to take me to the Broad. The building was designed by Liz Diller and her Diller Scofidio & Renfro firm which got its seed money from the MacArthur foundation. Most of the firm's designs are back east -- the Broad building is the only one here. I wasn't quite sure what I thought of the building.

But it had a wonderful moment that could have been right out of Alice in Wonderland. We walked into a large room where there was a table -- quite ordinary in appearance -- but in size filled the entire space. I'm not sure what exactly they said, but I loved filling the big museum parlor with gigantic sizes where perspective has no meaning.

The most puzzling part of the Broad Museum was an odd artist named Goshka Macuga, a Pole who built a work called "Death Of All Marxism, For All Women, Unite, 2013." The exhibit was built in Portland and I do not know the ideology surrounding its creation. But I suppose being Polish, the artist was not a Marxist. The ideology of a group of near naked women coming to worship Marx was not entirely clear to me. But I'm sure Los Angeles is the place to exhibit it.

The Polish sculptor did the exhibit in Portland. The photograph looked like the real grave of Karl Marx in Highgate in London. This exhibit has not just a grave-looking monument, there's a group of semi-nude females which offered a lot of naked circumstances.

I remember Karl Marx's grave in London made more sense for me.

Lionel Rolfe is the author of a number of books available on Amazon's Kindle Store and in Amazon's CreateSpace.