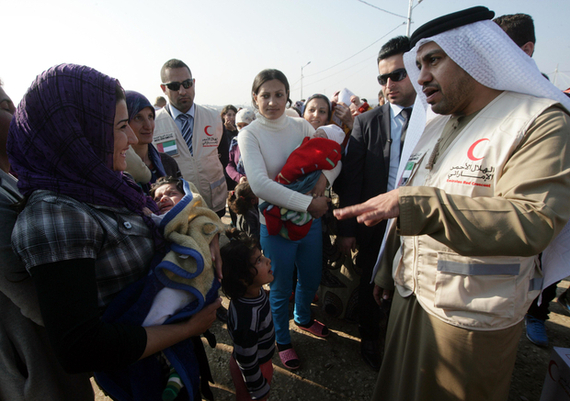 Rashid al-Mansuri, Consul General of the United Arab Emirates to Erbil, visits Syrian-Kurdish refugees as aid is distributed at a refugee camp in northern Iraq, on 4 January 2014 (AFP)

Subject to the outcome of discussions between President Barak Obama and President Vladimir Putin at the United Nations this month on the Syrian conflict, the refugee crisis is likely to get worse. Assad has lost most of the vital province of Idlib, and ISIS is on the outskirts of the suburbs of Damascus. With Russia entering the fray, a bolstered Assad and more Coalition bombing, the conflict may drag on. It is unlikely Syrians will subject themselves to constant aerial bombardment so millions more refugees will flee.

In the meantime condemnation of the Gulf Cooperation Council stance on the region's refugee crisis has reached a crescendo in some quarters of the western media, and while this has forced the GCC to defend its record, they have countered criticism by asking the world to do more.

Many commentators have noted the vast wealth of the GCC countries, which have so far helped Gulf countries to weather the storm of collapsing oil prices. Saudi Arabia and Qatar have provided some $900 million in humanitarian aid to Syrians. The United Arab Emirates have donated $530 million in aid since 2012. Problematically, UNHCR's Syria Regional Response Plan has requested another $4.5 billion, to ensure basic dietary and sanitation conditions in the refugee camps.

This catastrophic funding crisis risks condemning generations of refugees to live in camps indefinitely. If the GCC could match aid for Syrians to the economic assistance it donates to friendly governments, the impact could be huge.

Consider economic aid. The UAE offered $4.9 billion in economic assistance to Egypt when their economy was in crisis which formed part of the $20 billion aid package the GCC block committed to stabilize Sisi's economy which is substantially bigger than the total US aid to Jordan since 1951. This aid package dwarfs other recent foreign aid to the Middle East; Japan recently loaned $196 million to Jordan. The GCC has an exemplary and consistent historical record of its willingness and capacity to provide sanctuary and employment to citizens of troubled Arab and African nations since their independence from Western colonial powers.

As a matter of fact, compared to other countries, the GCC has contributed more than its fair share to assisting refugees (based on GDP) according to data from Oxfam. Gulf officials have been at pains to stress that millions of dollars in financial aid has been allotted to refugee camps in Arab countries including Syria.

Certainly, the GCC doesn't hold back on aid expenditure. In 2013, the United Arab Emirates was the largest foreign aid donor. The problem here is one of perception. Donations from some members of the GCC make aid allotted to the Syrian crisis seem small, and further bring into question the priorities of the council. For example, the $4 billion GCC contribution since 2012 amounts to only 15 percent of the $26 billion they have pledged in financial assistance to countries such as Egypt and Morocco. However, according to a World Bank MENA report, by July 2013, GCC economic assistance to the region exceeded their pledge and stood at $40 billion.

The GCC are cognizant of a sizeable number of Syrians living in the Gulf. The UAE claims to have taken in 130,000 Syrian economic migrants since 2011. Elsewhere, the Saudi Ambassador to Rome, Raed bin Khaled Grimly, defended his country in a press statement by highlighting that around 40 percent of his country's total population are expats, including 500,000 Syrians and 1,500,000 Yemenis, noting that they enjoy work residency, free healthcare and education. But claims of accommodating hundreds of thousands of Syrians have also been called into question: Francoise De Bel-Air of the Florence Migration Centre recently noted that figures given by the Saudi Arabia's Central Department of Statistics did not match their claims of the number of Syrians being hosted.

However it is important to note the expatriates from countries such as Syria are the lucky ones with qualifications, some capital and in many cases dual nationality. Millions are unable to enter the GCC without encountering difficult visa restrictions, in part because the GCC have no obligation to recognize Arabs fleeing war torn countries as refugees, since they are not yet signatories to the 1951 UN Refugee Convention.

The fundamental underlying reason for the restrictions placed on asylum seekers by the GCC is to preserve a fragile "demographic balance" given the relatively small number of the indigenous population and their particular societal structure that GCC members need to maintain for domestic stability. Meanwhile, Turkey, Lebanon, Jordan, Egypt and Iraq have taken far more refugees than their resources or internal security arrangements could possibly cater for. In the case of Lebanon, this is 1.3 million refugees or almost 1 in 4 of the population, placing welfare services under serious strain, as Brookings Fellow Kemal Kirişci recently pointed out. Elsewhere, Turkey has so far taken in 2 million refugees.

It is true the European Union, United States and Russia can certainly do much more in humanitarian terms - otherwise the UN would not highlight the funding crisis. But it matters more for the GCC because nations with the resources and shared history, culture, religion and language have an undeniable moral obligation to assist. Otherwise, why would EU countries have donated at least $5 billion to stabilise the Western Balkans, when they could have requested the US to foot the bill?

As a possible modest and short-medium term solution, the GCC could provide temporary housing such as the kind provided to the Bedoon or stateless communities, which comprise a notable part of the populations of countries, such as Kuwait.

These housing units provide reasonable habitation for $1000-$3000 per unit with access to social amenities. Granted, it is not ideal, but living conditions are much better than life in the camps which fast become ghettoes with chronic sanitary infestations. It is worth mentioning that thanks to UAE funding, a compound of such housing units was built in Jordan even though it has the capacity to only house approximately 25,000 people. Meanwhile Turkey has built several similar sites often referred to as "5 star" refugee camps.

Longer term solutions are needed. Within the GCC, the authorities may have to seriously consider widening for immigration purposes the definition of 'dependents' for those refugees with relatives already living and working in the Gulf to allow them limited rights of residency. Further safeguards could also be imposed such as passing medical tests, security checks and provide guarantees from sponsors living in GCC countries (relatives or local citizens), entitlement to employment in certain sectors of the economy.

Alternatively or in tandem, the UN may reach some sort of multilateral arrangement with the GCC to allow those with UN papers the right of entry into makeshift housing compounds which would fall under the administration and protection of the UN but subject of course to the host nations' local laws.

Aside from economic aid, there is the military dimension. The GCC combined air-force possess more than 60 Hercules transport aircraft, which can carry 21 tons of cargo over a 1000 mile range.

When one thinks of aid drops to refugees, one thinks of UN or NATO transports dropping food supplies. Why should it only be those organisations dropping food? Surely the risk to the coalition conducting operations in Syria would be minimal as opposed to the benefit to those struggling to survive.

A GCC led air bridge, supported by Egypt (which has 20 Hercules) could fly thousands of tons of aid into Beirut or Amman. Currently, some of these aircraft are being used in the conflict in Yemen.

Qatar have flown aid missions before, most recently when they flew aid to Nepal after an earthquake. Therefore, the will to help those in need is there and the capacity to help has been clearly demonstrated.

It is admitted that only the concerted and united will of governments can turn such ideas into detailed plans.

Of course, one cannot reasonably make a fair comparison between the Western values of democracy, which place emphasis on protecting the rights of minorities (including the protection of refugees) to the absolute monarchies of the GCC, where the issue of human rights has only recently become an important priority in government policy. Over and above the issue of Syrian refugees, an escalation of the GCC military intervention in Yemen is likely to increase the immediate and understandable domestic focus on defence spending and maintaining the welfare state of GCC nations - particularly given the hit to their sovereign wealth funds owing to depressed oil prices.

The GCC should seize the plight of refugees as an opportunity to foster unprecedented regional cooperation for the sake of their own domestic security. Given their combined annual defence spending exceeding $100 billion coupled with 40 percent of Global Sovereign Wealth Funds, the GCC have the capacity to match the great efforts of the Marshall Plan and the Berlin Airlift. Let us not forget this historic plan provided aid for 12 million destitute Germans and ultimately cemented European peace at the end of WW2.

The pressing question now facing Arab leaders is what are they waiting for? Given the freezing of relations between Russia and the U.S. and Europe, it is time for the GCC to demonstrate bold leadership and finally take the lead in solving the Arab refugee crisis.