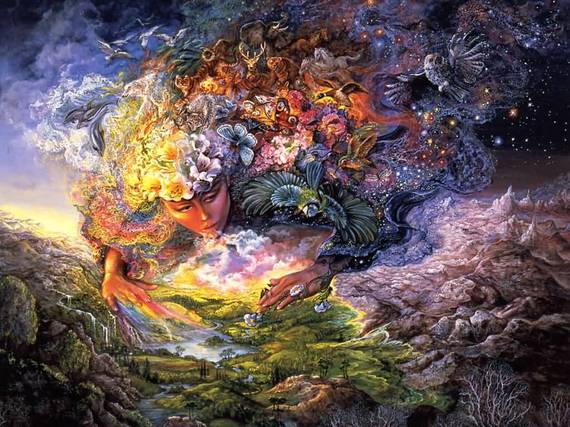 "Breath of Gaia" by Josephine Wall

In October 1913, psychiatrist CG Jung was riding a train in Western Europe. Suddenly, he was caught by an urgent inner vision of floods inundating the continent but sparing Switzerland. On the way back another vision rolled in, this time of seawater turned to blood.

Worried that he was losing his grip, Jung began what he called a "confrontation with the unconscious": a deliberate plunge into upwelling emotions and fantasies long held at bay. Not until a year later did he realize that the images assailing him on the train had signaled the coming outbreak of World War I.

Imagistic events that felt personal, Jung realized, could be triggered by collective occurrences. The individual was not psychologically separate from the time, then. "Because I carried the war in me," he wrote in his Red Book, "I foresaw it." By realizing this Jung placed himself beyond psychologies that limited themselves to the personal: my self, my family, my work, my relationships. "We make our era."

While teaching himself to use active imagination--basically a conscious daydream state--to dialogue with various figures of the imaginal psyche, Jung took another step. These figures, he realized, possessed their own kind of aliveness separate from the conscious mind's. In an inner conversation with an old prophet and a young dancer, for example, who showed up one day of their own accord, Jung tried to interpret them, only to be told by the old man, "We are real and not symbols." Jung was stunned.

Shaped from the experiential stuff of psyche, the saviors, villains, sages, warrior women, tricksters, birds, lions, whales, angels, extraterrestrials, and even gods of our dreams, Jung concluded, brought their own personalities and perspectives into their encounters with the conscious mind, which he now saw as a kind of interior democracy where every character should have a voice. (Imagine a "fictional" character you created having a say in the story! Some do.)

However startling or unexpected, these personifications--"invisible guests" as Mary Watkins called them--serve psychological balance. Jung wrote in "The Function of the Unconscious" that

The unconscious processes that compensate the conscious ego contain all those elements that are necessary for the self-regulation of the psyche as a whole. On the personal level, these are the not consciously recognized personal motives which appear in dreams, or the meanings of daily situations which we have overlooked, or conclusions we have failed to draw, or affects we have not permitted, or criticisms we have spared ourselves.

But mind is not an exclusive possession of individuals. The consciousness of entire cultures can get uprooted and out of balance. The fact that millions believe in a lie, observed Erich Fromm, does not make that lie a truth.

When that happens, public fantasy images surface--in mass movements, in films and art, in religious trends, in fads and psychic epidemics--to signal the breakdown of wholeness. These collective images correspond to what Jung called archetypes. Not their specific content, which varies with time and place, but their elementary motifs: the Hero, the Shadow, the Monster, Trickster, Death, Rebirth, Wisdom, Earth Mother, Heavenly Authority, and many others that so often take on the form of gods. In this perspective spirituality provides, at its best, a kind of cultural therapy, a corrective connection to the more-than-human.

Some of these old gods and their myths can still speak to us. Is not the spread of mass surveillance a parallel to the Argus, a guardian monster covered with eyes that never close? In the high-tech urge to "free" consciousness from the body and upload it into machinery do we not discern an ancient religious theme? Isn't artificial intelligence the latest evolution of the ancient figure of the Golem, an automaton programmed to carry out commands with perfect literality? At a recent hackathon in San Francisco I mentioned the cosmic net of sparking nodes flung forth by the egotistical lightning god Indra. Perhaps we should call what we surf and selfie our way across the Indranet?

"The most we can do," Jung observed, "is dream the myth onwards and give it a modern dress." The depth and quality of our contact with the sacred and numinous forces of existence depends on how well our symbols and practices fit the time, for each time requires new means of access. Dogmas and beliefs wear out, but the need for transcendent contact remains. He helped update it by reimagining the gods as archetypes: resplendent potentials that recur again and again.

Along with Jung, Hermann Hesse, Thomas Mann, Joseph Campbell, Rollo May, and many others attribute the confusion and chaos of modernity to its hostility to myth and archetype. "The gods have become diseases," as Jung put it, anticipating a day in which only what can be measured is considered valuable or real. No doubt the disparagement of myth and spirit is partly to blame for the fact that the most we know of Saturn, the god that ate his children, is the SAT test that ranks students against each other. Procrustes doesn't keep an inn anymore: he whacks the legs off any style of thinking or being that fails to fit preexisting standards. The world-burning sun tree of Chinese myth now resembles a tangle of smokestacks.

However, I suspect a deeper dynamic than myth phobia at large. The angelology of the interior Jung left us with can reconnect us to sacred images and impulses surfacing within, but to the end of his life he held to the Enlightenment belief that the spirits of hill, river, and dale were gone forever, swept away by ongoing interiorization and psychologization. From The Undiscovered Self:

Through scientific understanding, our world has become dehumanized. Man feels himself isolated in the cosmos. He is no longer involved in nature and has lost his emotional participation in natural events, which hitherto had a symbolic meaning for him. Thunder is no longer the voice of a god, nor is lightning his avenging missile. No river contains a spirit, no tree means a man's life, no snake is the embodiment of wisdom, and no mountain still harbours a great demon. Neither do things speak to him nor can he speak to things, like stones, springs, plants, and animals....His immediate communication with nature is gone for ever, and the emotional energy it generated has sunk into the unconscious.

Is it gone forever? All our indigenous ancestors everywhere in the world knew that soils, rocks, waters, winds, trees, animals, insects, and skies held qualities of soulful aliveness. Could our incapacity to feel this aliveness have less to do with scientific "progress" than with a natural cross-cultural sensitivity stamped out by industrial systems with a vested financial interest in reducing nature to raw material?

As Jung observed in his patients' dreams and artwork, spirals often represent symbols of individuation, of gaining ever-clearer consciousness of self one cycle at a time. But spirals twirl everywhere, from the drain in the bathroom to rotating galaxies above and around us. The star is an archetype of hope and destiny, but at night the sky is lit with stellar luster. Death and rebirth, transformation and holiness unfold not only in privileged human consciousness, but all around us on every leafy, furry, and scaly side. The universe is a vast treasury of living symbols, a perpetual pageant of images.

If archetypes shimmer in the natural forces outside as well as inside, if the Hero is eloquent strength, the Sky God a higher view, Trickster the Coyote and Hare that outwit their predators, Aphrodite the sexy attraction in matter and gravity, Osiris the underworld force that grows hearts and grains, Oshun the abundance of beauty and wealth, and Sophia and her sisters the subjective lining of everything, then perhaps we can turn the spiral once more and dwell in deep appreciation of Gaia or Terra, our sentient Earth floating in a cosmos that fills us with delight to behold.

Thus might the gods be reborn: not as distant deities or brawling potentates above or behind the things and elements of life, but within them as their awakened spirit, essence or soul.