LGBT people face unique discrimination in many parts of the world where the World Bank conducts its work. Seventy-five countries criminalize homosexuality and in many other countries they face high levels of discrimination, persecution and violence. Jim Yong Kim, president of the World Bank Group, argued in a blog that "Institutionalized discrimination is bad for people and for societies. Widespread discrimination is also bad for economies. There is clear evidence that when societies enact laws that prevent productive people from fully participating in the workforce, economies suffer."

Three years ago, several LGBT activists started an advocacy campaign to discuss the development of a comprehensive LGBT agenda at the World Bank. This works includes research, the hiring of a SOGIE (Sexual Orientation and Gender Identity and Expression) senior position to coordinate World Bank work on SOGIE and facilitate the relationship with the SOGIE community worldwide, a stand-alone SOGIE safeguard policy, and having President Kim meet with local LGBT communities when he travels.

After a long three years, on April 11th, 2016 World Bank President Jim Yong Kim met with activists from 17 countries to discuss how LGBT individuals can fully benefit from World Bank projects and programs in light of the severe discrimination they experience in their countries. The activists were in town for the World Bank and International Monetary Fund's Spring Meetings. Accompanied by World Bank Executive Directors from Finland, Switzerland, Netherlands and Chile, as well as the Bank's Chief Economist and a cameo appearance from U2's Bono, the President reported on the long standing requests he has received on Bank activities related to SOGIE. 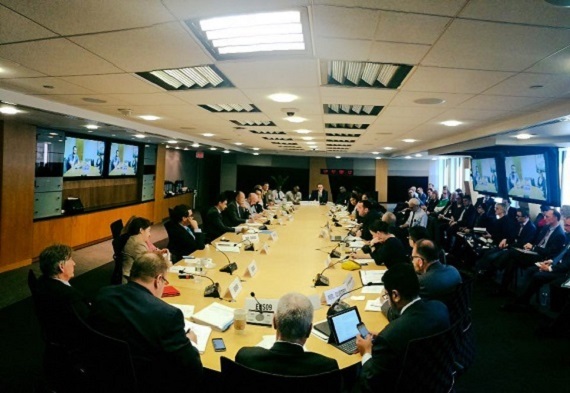 At the April 11th meeting, Dr. Kim reported on how far the Bank had gone dealing with the three year old requests. He announced that the Bank would hire its first ever SOGIE Advisor, a senior position to coordinate Bank work on SOGIE and to facilitate the relationship with the LGBT community worldwide. He also announced that the Bank would fund 3 new studies to analyze the cost of homophobia in Brazil, Chile, and Venezuela. The total cost of the studies is predicted to be $750,000.

Dr. Kim committed to partnering with United Nations Development Program (UNDP) to prepare a funding proposal for a July meeting of SOGIE donors in Uruguay. He also promised to make his most efforts to meet with members of the LGBT community when he travels, for instance in his upcoming visits to India, Bangladesh and Sri Lanka. 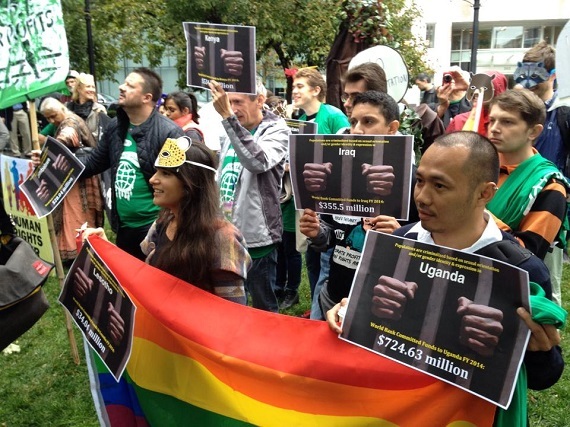 Finally, the President noted the difficulty in passing a safeguard policy on SOGIE due to strong opposition from countries including Saudi Arabia, Russia, Kuwait and many African countries. He did commit to vigorously support a nondiscrimination clause in the updated safeguards -- set to be finalized this year -- that would specifically identify the LGBT community. The LGBT community has been advocating for the last three and a half years that the Bank adopts for the first time a social policy to protect the LGBT community from harm in the World Bank projects, and enable the community to share in development benefits.

The current Bank social policies do not require assessing the unique needs or concerns of the LGBT community, or to determine how a specific project might impact that community. These policies do not guarantee Bank consultation with LGBT people or organizations in areas where the Bank will be investing or conducting its work. Also, the policies neglect to outline how LGBT people will be protected from arrest, violence or persecution when they participate in Bank projects.

At the event "Pride and Prejudice: the business case for LGBT diversity and inclusion" organized by The Economist in New York this past March 18th, President Jim Yong Kim was interviewed on the World Bank efforts on LGBT rights. Zanny Minton Beddoes, Editor-in-Chief of The Economist during the interview with President Kim questioned him about why we are not seeing the World Bank at the forefront on research providing metrics and statistics making the case against LGBT discrimination and why discrimination is bad for the development, as it did in the case of corruption some 20 years ago. She argued that it is about time that the Bank develops and put in place a proactive research and educational agenda.

In the meeting with President Kim, LGBT activists demanded the same. They also expressed appreciation for Dr. Kim and the Executive Directors' work, but emphasized that there is still a long way to go until LGBT individuals can fully benefit from World Bank loans.