Humanity's ability to predict and plan for the effects of climate change is constrained by lack of understanding of the capacity of living creatures to adapt to changing conditions. One scientist who is tackling this issue is Dr. Mariah Meek of Cornell University. Meek studies brook trout in upstate New York, and specifically, how the warming of their native lakes affects the trout, which thrive in cool waters. To catch evolution in action, she is looking at trout genetics at a molecular level, searching for molecular mechanisms that underpin the specie's ability to adapt. I interviewed her about her research, and its practical application for managing fish and wildlife populations in a changing climate:

Question 1: How is climate change affecting the waters of upstate New York, and what impact is this having on the native brook trout?

Answer: As the global climate warms, so too do the lakes and streams of the Northeastern United States. Brook trout are a classic cold-water species, therefore this warming is having very negative effects on their populations. Currently, only about 5% of historical brook trout stream populations are still healthy and intact, and climate change is one of the leading causes of that very serious decline. In my research, I am using genetics to figure out if there are differences among populations in how they are affected by climate change. For example, a few populations have thus far been able to tolerate warmer temperatures, while others have gone extinct due to warming waters.

This variation in how populations respond to warmer temperatures shows there may be adaptive differences among populations that allow some to tolerate a slight warming, while others cannot. Identifying and understanding what causes these differences is important because we can use the information about the evolutionary mechanisms that allow some population to tolerate a little warming to figure out how to protect those that aren't faring well in warmer temperatures. This will improve our chances of being able to ensure brook trout are still a part of the Northeast ecosystem for generations to come. 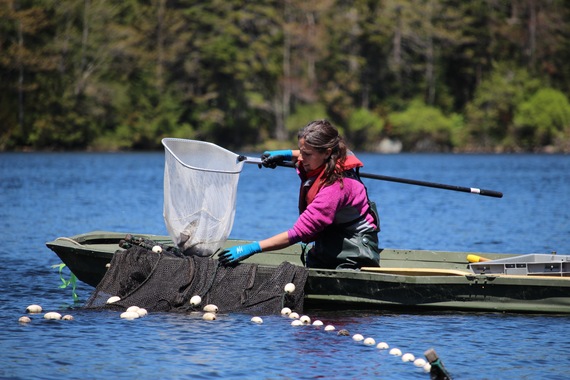 Question 2: How do you study trout genetics at a molecular level?

Answer: I am super lucky, I get to go fishing for my job! To study trout genetics, I go out to lakes and rivers in the Northeast and I catch brook trout using big nets. These nets have traps on them that hold the fish and don't hurt them. Once caught, I pull the trout out of the traps and take a very small fin clip from each of them (which doesn't hurt the fish) and preserve the fin clip in a little tube. I then release the fish back into their lake or stream and they go on their merry way. I take the tubes of fin clips I've collected back to the genetics lab I work in at Cornell University. There, I put the samples through a process that isolates the DNA and the RNA that is in the cells of the fin clip. DNA contains our genes, which is the code for the processes that happen in our bodies. RNA shows us how a gene is being used in the body--how it is being turned off and on.

Once I've isolated the DNA and the RNA from a fin clip, I use a process called next-generation sequencing to read the DNA and RNA sequences. I then can compare the sequences in the DNA and the RNA among the fish from the different lakes and streams to see if there are differences in their genes (the DNA) and differences in the way their genes respond to warming temperatures (the RNA). This information is valuable because it lets us know, at the most fundamental level, how each population is unique and how they are responding to the environmental stress of warming temperatures.

Question 3: What could these molecular mechanisms tell us about species' abilities to evolve under stresses such as a warming climate?

Answer: By looking at the DNA and genes that are present in the populations that are tolerating some warming temperatures, we can begin to understand what genetic makeup is needed to withstand a warming climate. We can also learn through the RNA which genes are being turned on and off in response to changes in climate. When we understand these two aspects, we can then go out and look at other populations to see if they also have the same genetic makeup that may allow them to adapt to warming temperatures. If we don't see the needed DNA present in a population, then we know they may have a hard time evolving under the stress of climate change, but if we do see it present in a population, that tells us that population may have a better chance of being able to evolve. 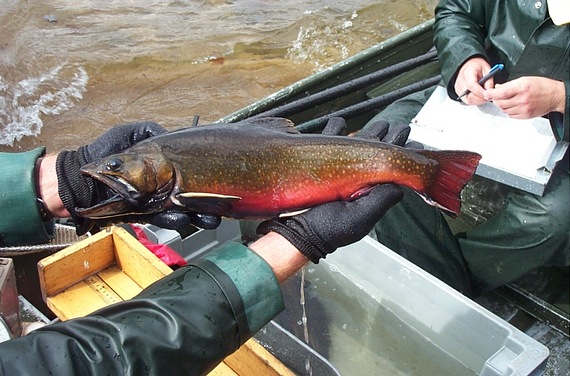 Question 4: Why should we care about the effects of climate change on brook trout populations?

Answer: Brook trout are a socially, economically, and ecologically important species. They are the only trout species native to much of the Eastern United States, so they are an important part of our heritage. Losing them from the lakes and rivers in the area would mean future generations don't get to experience the joys of fishing for them in their favorite waterways, or seeing them spawning in the rivers and lakes.

Economically, they bring in revenue and jobs to our local economies through sport fishing activities. Additionally, they are a vital component of our aquatic ecosystems. They are considered a "sentinel cold water species", which means the health and presence of their populations is an indicator of the overall health and quality of our aquatic ecosystems. If brook trout aren't doing well, it means the health of the ecosystem is going down and soon other species will also be doing poorly.

If we can focus on limiting the effects of climate change and improving habitats for healthy brook trout populations, it means we will be improving the habitat for many other species as well, ourselves included.

Question 5: What are the practical applications of your work for fisheries management?

Answer: One of the great unknowns for managing our fisheries is how we can help cold-water populations survive warming waters under climate change. My research will help us make informed predictions for how brook trout will respond to warming temperatures. My work is trying to understand now how brook trout will respond, at a molecular level, to warming in the future. This will allow us to more effectively plan conservation efforts that include and prepare for potential warming scenarios, which will benefit species into the future, rather than just managing for our current climatic conditions.

My overarching goal is to provide managers with the ability to evaluate the vulnerability of brook trout populations to the negative effects of climate change and to identify populations predicted to be most resilient. We can then use this information to guide conservation and reintroduction efforts that are underway, and increase the chances that we will have brook trout around for generations to come.

Dr. Mariah Meek is an aquatic ecologist and conservation geneticist. She is currently a David H. Smith Postdoctoral Fellow in Conservation Biology working at Cornell University. Follow Dr. Meek on twitter and learn more about her research at mariahmeek.wordpress.com.