The government's focus on water for the past 45 years has been more on water quality than on quantity. Despite dwindling supplies and growing demand, the government's record on addressing quantity concerns has been disappointing. But there is hope: companies and citizens are taking on a role once assumed by government.

One person looking for a solution to water scarcity via free market forces is Simon Davis, a business executive focused on converting the world's urinals to operating without water. Davis is the CEO of Falcon Water Free Technologies, a company founded by Jeff Skoll and Marc Nathanson, two rich guys with a passionate interest in making the world a better place, but who understand that market forces can be used to achieve that. If they each get rewarded with financial gains for their effort and risk, they won't complain, even if that may not have been their initial or primary motivation.

I stumbled onto Falcon Water Free and Davis entirely by chance. I was a speaker last summer at the Aspen Ideas Festival and had noticed the water-free urinals at the Festival. I made a mental note to learn more about them. Then, by chance, I got invited to a small dinner party hosted by Nathanson and his wife, and was assigned to sit next to Nathanson. Dinner conversation at the table focused mostly on politics and other headline news, but when I asked Nathanson to share a bit about himself, he told me in a good-natured and humorous way that he was one of the founders of the company that made the urinals at the Festival. When my questions went beyond the basic, he promised to make an introduction to Simon Davis, which he soon did.

Davis is a Brit. If you think of Great Britain as a place of endless rain and green lawns, you are partially right. The country also suffers from periodic droughts and less-than-ideal water infrastructure. Davis reports having been fascinated with water issues from a young age and, he says, those periodic droughts were reminders that water isn't inexhaustible. When you need it, it may not be there. This led to a career in trying to develop water-efficient appliances. When Nathanson and Skoll came calling, Davis was excited to move over to Falcon, an already established company.

How much water could water-free urinals save? Well, more than you might imagine.

There are seventy-five million urinals installed in the world today. Each one, on average, is flushed at least three times a day. Assuming no leaks and perfect efficiency, urinals use a gallon per flush. Simple math leads to understand that urinals use up about a quarter of a billion gallons of water every day. 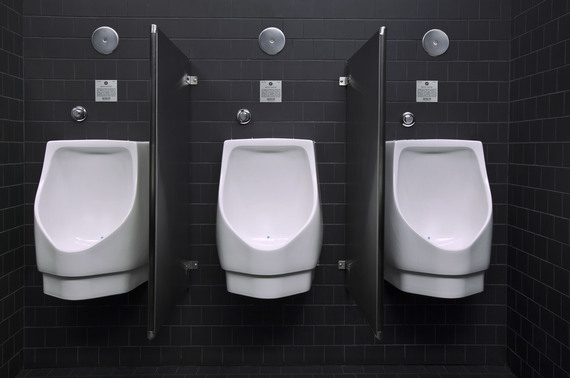 In just a few years, Falcon, which markets its products in partnership with Sloan, and other urinal manufacturers like Duravit and Kohler, have installed about two million water-free urinals, a small dent in the total, but still representing six million gallons of water saved daily that until recently would be wasted.

It will take a generation--with new construction and office and public facility renovations leading the way--for the global replacement of familiar water-flushed urinals to be completed. Still, the trend line is unmistakable. And even more important, what is happening in urinals will also happen with other household and commercial appliances.

Falcon itself has a water-saving idea for sinks in office and public restrooms that would eliminate leaving the water running while reaching for the liquid soap. The Falcon sink allows the user to moisten his or her hands, automatically stops the water, and then drops a dab of soap. After allowing a moment to spread the soap, the water flow resumes until it is shut off again and a paper towel drops down.

Others are working on hyper-efficient toilets, showers, dishwashers and washing machines. I hope to profile some of these in upcoming posts.

What is so smart about the inventors and marketers of these new devices beyond the technology they employ is that these water-efficient appliances give consumers the opportunity to continue to enjoy their lives in a familiar way and with no less comfort, but with large water savings. In the aggregate, the savings will be enormous, even transformative. The devices may be evolutionary, but the effect will be revolutionary.

Seth M. Siegel is a businessman, activist and writer. His new book Let There Be Water: Israel's Solution for a Water-Starved World is a New York Times bestseller. Seth regularly features on television and radio, and his essays have appeared in The New York Times, The Wall Street Journal, and the Los Angeles Times. He is a member of the Council on Foreign Relations. Learn more about Let There Be Water at www.lettherebewater.com and follow Seth @SethMSiegel. Copyright © 2015 Seth M. Siegel. All rights reserved.

Businessman, Activist and Writer. Author of the New York Times bestseller Let There Be Water: Israel's Solution For A Water-Starved World