If video games are still on trial, they've been steadily building a pretty strong case in their defense.

First, Steven Johnson releases Everything Bad is Good for You, arguing that games may in fact sharpen our problem-solving skills and improve our IQ.

Next, Jane McGonigal makes the case that we should spend more time playing games, not less. In her book, Reality is Broken, she cites studies showing that games not only improve our cognitive abilities, they also make us more pro-social.

Now, Jesse Schell, a leading thinker on game design, takes the witness stand and claims that video games, even the seemingly violent ones, may help us become more prone to peace.

You can hear him make the case himself by watching his keynote speech (below) from the 8th Annual Games for Change Festival in New York.

One thought-provoking slide he used compared the rise in popularity of video games with the simultaneous decline of violent crime in the U.S. But like so many claims on both sides of the debate, this evidence is, at best, inconclusive. 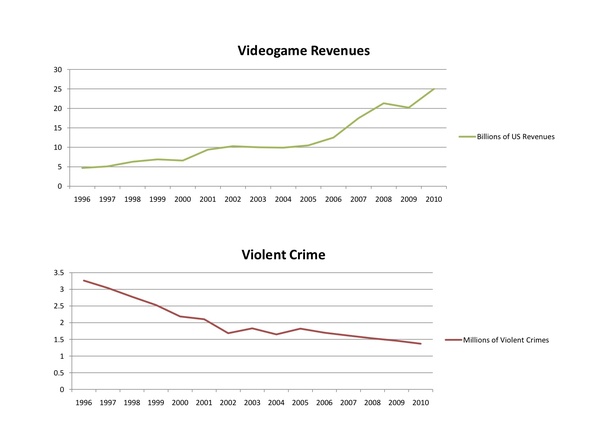 For me, the most interesting case to be made for games as instruments of peace is their unparalleled ability to immerse the player in another person's worldview, or at least a simulation of it. Storytelling does that to some extent but games can go even further. Through role-playing games, you take on someone else's point of view and evaluate every key decision through that person's eyes. That's the very definition of empathy.

Games that aim to do just that include Peacemaker -- a game in which you try to bring about Middle East peace by playing the role of the Israeli Prime Minister or the Palestinian President -- and some of this year's winners at Games for Change: Participatory Chinatown and Inside the Haiti Earthquake.

If games that are both popular and fun can truly help us empathize more with others, then a strong case could be made for their impact on peace. But the jury, I think, is still out.