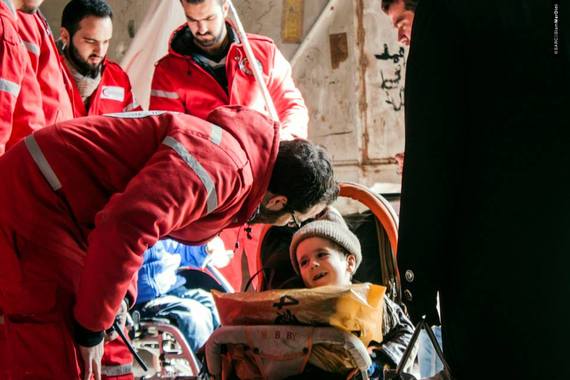 In the cold nights of the northern Syrian spring, can you imagine the perils of giving birth in a hospital with no electricity? Newborns stood little chance of survival amid the chaos and carnage in eastern Aleppo, until the ICRC and the Syrian Arab Red Crescent managed to get an electricity generator across the city's frontline to the only paediatric hospital. A few days later, our Head of Delegation in Syria received an email with a picture of rows of incubators warming hours-old babies.

"It was risky getting the generator to hospital but it really saved lives," our delegation chief, Marianne Gasser, told me after Red Crescent volunteers braved sniper fire to help restore power.

Every new life is of course a moment of joy for its mother and father, and who could deny parents their hopes for a child, even in Syria as the country begins the fifth year of its devastating conflict? But the child's prospects are bleak. In Aleppo, it will grow up amid the rubble from months of heavy fighting and will sleep amid the unceasing noise of shellfire and shooting. If it flees with its parents it will join the 4 million Syrians who have sought refuge abroad, or become one of the seven million Syrians seeking safety with friends, family, in camps or in rudimentary shelters.

Every child born in Syria is touched by the conflict. Medical services are crumbling, the economy is on its knees, and the multitudes of jobless have few savings left to live on. The child's relatives will have been killed or injured. When the child falls ill its parents will struggle to get adequate treatment since the hospitals have shut down or been destroyed and the doctors have fled or been killed. The parents must worry about where to find food, how to stay warm and whether the water that still sometimes flows from the taps is safe to drink.

The Aleppo child will be particularly vulnerable in a conflict that has broken almost all the rules meant to spare those taking no part in fighting. Four years of destructive violence do not make it acceptable to attack medical facilities, indiscriminately target civilians or mistreat captives. Where you are born, your parent's beliefs or your ethnic background should not make you a target. The young, the old, women, the disabled, the sick and the wounded are entitled to protection under international law. Too often the ICRC's calls for those laws to be respected are ignored.

The conflict is having such an impact that the Red Cross and Red Crescent Movement must repair more and more of Syria's basic infrastructure. Our engineers are fixing pumps, renewing pipelines, distributing bottles and trucking water to ensure that 16 million Syrians have drinkable water, a basic necessity of life. In Aleppo the electricity network is so damaged that there is little more than an hour of power a day. Our teams are replacing high-tension cables so that essential services, such as hospitals, have the electricity they need to operate.

Buildings are shattered by violence, but so are people. In Aleppo alone, the authorities estimate an extraordinary 70-100,000 people have suffered amputations since the conflict began. Each of those traumatized individuals needs rehabilitation to recover physically and mentally. Wheelchairs are needed, and so are prosthetic limbs. By the summer the ICRC and the SARC will have two large orthopaedic clinics running, in Aleppo and Damascus, to provide artificial limbs and therapy.

It is projects like our water services and our physical rehabilitation clinics that make a difference in Syria. Marianne has recently returned to Syria after 18 months away. When I asked her what had changed she remarked that many of her old friends had lost hope. It is up to the politicians to make peace but the Red Cross and Red Crescent Movement, supported strongly by its donors in the Middle East, can help maintain hope.

Through a patient process of negotiation, and by insisting that aid be distributed solely on the basis of need, the Movement has increased those moments of hope. Every week, 200 trucks of aid leave our warehouses inside Syria and last year we doubled the number of times we crossed frontlines to reach those in need. Red Cross and Red Crescent societies in Turkey, Lebanon and Jordan are offering food and shelter to the most vulnerable, transporting and treating the war wounded and providing basic health services to refugees. Governments and citizens have proved generous hosts for thousands of Syrians who would simply like to go safely home. In Syria itself many of those who have a little seek to share it. The ICRC provides food and pays for cooking gas for collective kitchens that feed thousands of people. But these kitchens are run by local charities and would not survive without the admirable generosity of fellow Syrians.

The nature of the Red Cross and Red Crescent Movement, a partnership of international and local response that is independent and impartial, gives it a unique ability to sustain hope for years to come. The Movement is ready to double its current level of response in Syria and its help for refugees and hard-hit host communities in neighboring countries.

The conflict will not stop tomorrow and we are planning ahead. There will be at least five more years of intense humanitarian activity required.

We are on the eve of the third annual conference in Kuwait to generate pledges of financial support for the Syria humanitarian effort, hosted by the Emir of Kuwait, His Highness Sheikh Sabah Al-Ahmad Al-Jaber Al-Sabah, who has generously supported the Red Cross and Red Crescent Movement in the past.

If this Kuwait meeting can generate long-term partnerships between donors and the Red Cross and Red Crescent Movement it will be an extra glimmer of hope for every child born in Aleppo and across the region.