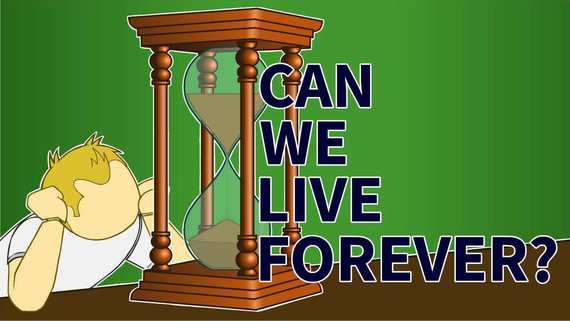 Transhumanism is the idea that we can (and should) use scientific knowledge to fundamentally transform the human form in order to improve human intellectual and physical abilities. These ideas are usually connected with discussion about radical life extension, or even dreams of some form of immortality. I've previously discussed how even companies like Google are getting involved in the transhumanist desire for radical life extension. The cultural pressure for longer life seems to be growing quickly. But can we actually live forever (or at least radically longer)? The answer to that question is (sadly) unknown, but I wanted to make a video that contextualized our seemingly innate drive to seek immortality or eternal youth. Even before the emergence of modern science, humans fantasized about eternity:

Hope me turning into a robot wasn't too scary! Of course, I want to emphasize that like our dreams of immortal life in pre-modern times, scientific dreams of immortality are far more diverse than I was able to convey in this video. Also, the idea of a technological singularity is very diverse. The one depicted above is definitely "Kurzweilian" in nature. However, as artificial intelligence expert Ben Goertzel has discussed in various publications, the singularity could happen in many different ways. This just means that a complete merger between humans and our machines is not the only way that superhuman intelligence could emerge. Theories range from Hugo de Garis' idea of an "Artilect War" to Francis Heylighen's idea of a "Global Brain" (which I have discussed before). And to make matters even more complicated, even different singularity scenarios are not mutually exclusive. I personally take the stance that our understanding of singularity will gradually be improved and refined as we get temporally closer to the emergence of superhuman intelligence, but as of now all we can do is propose untestable hypotheses. Either way, the idea is fascinating to contemplate.

Getting away from different singularities for a moment, I also want to emphasize that although some of the research discussed in the video may seem like science fiction, most of it is occurring in labs across the world right now. Research related to stem cell replacement organs and brain-interface technology is already moving forward at quite a rapid pace. This trend should continue as more people and companies with deep pockets invest in genetics, nanotechnology, and robotics. If you're interested in learning more about this research, I'd definitely recommend checking out George Church's interview discussing "brain healthspan extension," or Ed Boyden and Theodore Berger discussing brain-interfacing technology and nanotechnology.

From an anthropological perspective I can't help but marvel at our persistent desire for eternity. The phenomenon specifically makes me wonder if the yearning for eternity is in some way connected to the fact that we are the only species aware of our own finite existence. Philosopher Stephen Cave recently presented an idea similar to this at TEDx.

From Cave's perspective, the notion that science could cure aging and death is just one more "elixir" story, no different from the stories believed by ancient alchemists or medieval conquistadors. I know the neuroscientist Sam Harris has even gone so far as to call the singularity "science-enabled religion." From my perspective I feel like the possibility of radical life extension is definitely within our species' capabilities. Science has already proven that it can dramatically improve our health and longevity with surprising rapidity within just centuries.

Admittedly, science bringing the world population collectively closer to its evolved aging average is much different from science bringing the world population into a post-aging society. However, I maintain that whether or not we achieve radical life extension is dependent on how we decide to allocate our own resources and attention. A world with radical life extension would of course be profoundly different from the one we live in today. Almost every aspect of our existence is directly or indirectly based around the assumption that aging and death is an inevitable consequence of being alive. How would humans behave in a world where that wasn't the case? When confronted with this question, I tend to recall a talk by Stephen Wolfram, in which is said:

In the end, one way or another, effective human immortality will undoubtedly be achieved. And it will be the single largest discontinuity in human history. But I wonder what's on the other side?

Evolutionary anthropologist and creator of The Advanced Apes