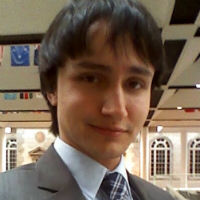 Christopher-Marcus Gibson is a University Scholar and Mellon Mays Research Fellow in his senior year at Duke University, studying philosophy and classics with the intention of beginning doctoral studies next fall.
Advertisement

The motivation for my honors thesis springs from our often irresolvable disagreements about moral and political issues in the public square: issues ranging from educational and economic reform to health care and immigration policy, in which we often disagree about not just the answers to our questions, but the standards that will justify them. Such intractable disagreements, and the incompatible ethical theories that often lie behind them, led me to address in my honors thesis the following question: "How far we can make ethics scientific?" As a result of my research I claim that although acculturation and character development play a major role in determining the ethical claims we find persuasive, a rigorous empirical science of ethics could still be an attainable goal for us. If undertaken, such an approach to ethics could go some way toward providing potential methods of resolution for our fiercest moral and political disagreements.

Although I treat this question primarily via engagement with Aristotle and contemporary philosophers in dialogue with him, my resulting argument bears directly on the possibility of maximizing ethical theory's scientific rigor today. By engaging with the scientific and ethical works of Aristotle, whose models of scientific demonstration became the basis of our own modes of scientific explanation, I developed an account of how an ethical science would operate. I argued that we can explain and evaluate ethical claims on the basis of a foundational definition of flourishing human life. A science of ethics would therefore investigate the necessary components and conditions of a flourishing life and demonstrate its findings on the basis of that definition. What complicates the issue is how one would arrive at the definition: upbringing and acculturation shape our understanding of what activities are worthwhile, and no aspiring ethical theorist could reverse this process or step outside her own character when searching for the definition. I argue that this difficulty should serve as a sobering reminder of the deep investment we have in our ethical theories, without, however, discouraging us from seeking an ultimate explanatory basis for the ethical claims we make on one another. I recently developed my research thus far into a reduced, 20-page version of my honors thesis, which I presented at Emory University for the 2013 Southeastern Regional Conference of the Mellon Mays Research Fellowship Program. I now continue to work toward the completion of my honors thesis, which I intend to make the basis of my graduate research on the possibility and practice of an ethical science.

I begin my argument by taking stock of the conditions a potential science of ethics would have to fulfill. The approach to ethics my thesis proposes would be an empirical investigation into the causes and conditions of human flourishing and the relations these bear to moral character. Such a discipline would therefore have to enable us to explain the truth or falsehood of the ethical claims which we debate. For this reason I turn to Aristotle's models of demonstrative explanation to consider how a science of ethics could accomplish this task. As I interpret Aristotle's logical and biological works, they offer two distinct models of demonstrative explanation. In the first of these, given in the logical works, a demonstration is a syllogism chain in which the conclusion is a non-accidental fact to be demonstrated and whose second or minor premise is the cause which explains why that conclusion must hold. Since this kind of explanation cannot go on indefinitely, however, there must be some premises that are not explained in terms of any others, but which are somehow fundamental in the order of explanation: these are the starting points of scientific explanation, which we determine not by demonstrative explanation but by some other means. Thus, in geometry we might demonstrate that triangles have interior angles whose sum is 180 degrees by appealing to the definition of the triangle, but eventually we will reach truths that cannot be explained in terms of any others: these, such as the definitions of point and line, would be the axioms or starting points of geometrical explanation.

As my example illustrates, this model of demonstrative explanation is well suited to explaining facts like mathematical truths, which do not involve changing phenomena. Since a science of ethics would take human affairs as its subject matter, however, we should look not only to this model of demonstration but also to the model fitted for the subject matters of natural science. Thus in his biological works, Aristotle makes use of a different concept of demonstration: one whose relaxed requirements make it more suitable for explaining phenomena that do not occur always and by strict necessity. Such phenomena (for instance, an acorn's growth into an oak), though still scientifically explicable, involve regular causal processes, so that the truth of premises expressing them depends on certain conditions (sufficient sunlight, water, and nutrients, the absence of threats, etc.). This means that unlike the propositions in the Analytics' definition‑based demonstrations, those used in the biological works do not exhibit the same strict or unconditional necessity.

The differences of this natural model do not stop here, however. For whereas definitions played the fundamental explanatory role on the first model, in this model, Aristotle develops a related but innovative concept, one which decided the course of all future scientific investigation: the concept of a species' nature. Determined by observation and argument, the nature of a species determines and explains what features, functions, and kinds of change are characteristic of that species, and thus it serves as a standard for determining which members of a species are in a healthy or flourishing condition and which are not.

Introducing the concept of nature thus provides us with a subject for the science of ethics to investigate and deploy as its explanatory foundation. Since scientific investigation into the nature of a species reveals the species-specific behaviors that mark flourishing members of that species. This suggests that the natural model of demonstrative explanation would be better suited to a science of ethics than the logical model. Human lives, after all, involve processes of development from potentiality to actuality that include myriad causal regularities. In this respect, the science of ethics would simply be the focused study of the nature and conditions for the maturation of a particular biological kind (human beings). Informed by our best findings in the natural and social sciences, ethical theory would work on the basis of a definition of human flourishing to explain what kinds of activity, character traits, or external goods promote that flourishing. To illustrate: if human nature as analyzed by ethical science indicates that human flourishing entails the exercise of a virtue like generosity, then ethical theory could establish a demonstrative explanation for ethical value of acquiring and using at least a minimal amount of wealth.

If this were the whole story, establishing a science of ethics would be challenging enough, though perhaps comparatively straightforward. Matters turn out be even more complicated, however, when we consider how different the subject matter of scientific ethics would be from the conventional sciences: unlike the latter, which simply seek definitions and explanations for natural phenomena, ethical science would concern the actions and pursuits that we ourselves engage and are invested in. Since our activities are subject to and motivated by all manner of desires and drives, our psychological makeup plays a great part in determining how we come to experience and view these activities. Supposing we were pursuing the definition of human flourishing, then, our knowledge (or lack) of it would depend on more than observation alone: it would depend on the very activities, traits, and social roles or practices that we come to take part in. This naturally suggests that upbringing and cultural influence play a large part in how we form our beliefs about what counts as human flourishing. Beyond this, however, it leads me to propose the more controversial claim that, supposing this vision of a scientific ethics holds true, the preexistent ethical beliefs we would bring to it would depend in part on how our own character has developed. All of this "dirties the picture," so to speak, since after all we all have a vested interest in our own affairs and how they might align with whatever human flourishing consists in, and so we should not realistically expect perfect objectivity about the phenomena, which a science of ethics would seek to prove or explain. Nevertheless, that should not detain us from endeavoring to establish ethical claims on a firm, scientifically rigorous basis that my honors thesis delineates.

These conclusions lead me to return to my reflections on moral and political debate that first motivated my honors thesis research. It doesn't take a specialist to recognize that vested interests and other psychological factors often cloud our reasoning on such questions. Political agenda rather than objectivity often hold sway over how things go in the natural or social sciences: one need look no further than the debates over climate change to see how both sides of an issue seek scientific justification for their claims, often reducing the process of inquiry into a tool of ideology. Why should things go any differently for a proposed science of ethics? While I recognize the potential for abuse here, nevertheless I contend that this risk does not outweigh the potential benefits of pursuing ethics scientifically. Partisan interests already influence the process of inquiry in traditional ethical theory. At least bringing the merits of philosophical ethics into cross-fertilization with the methods of scientific inquiry would help to ground the work of ethical theory in empirically verifiable facts about human beings. If successful, such a project would thus not only help clarify and resolve our moral and political disagreements -- it would advance a new, fully interdisciplinary approach to the study of ethics, drawing on our best cognitive and social science to answer questions about moral character and its relation to human flourishing.