I’m not a Pokémon GO addict... seriously. I’m only on level 5, and that was done in one walk around the neighborhood with my husband. I cannot tell you what a Rattata evolves into or where to find Pikachu. It takes me about three balls to capture a Pidgey. I’ve spent most of the week learning about Pokémon GO from my husband, who plays during our now-nightly creature hunting walks. Other than one night, I’ve been a player from the sidelines, playing vicariously through him.

In recent days, though, I’ve been hearing so much Pokémon hate. People glare at my husband and I for being childish and playing the game on our evening walks. Some claim the game is just a way for companies or the government to collect data on us. Recently, a video posted about how Pokémon can ruin a marriage; although seemingly just humorous, it does mimic some of the criticism floating around in the anti-Pokémon GO crowd.

Certainly, there are tragedies that have happened in recent news related to the app. There were corpses found in San Diego because of the game and falls off cliffs from inattentive players.

These stories are certainly worrisome and should be taken seriously. However, I don’t think we can generalize and say the game is completely negative.

Sure, Pokémon GO, like any addiction, can overtake lives. It can get in the way of relationships, work performance, and overall wellness. I clearly think there are precautions we need to take in order to enjoy the game safely.

But that doesn’t mean it has to be a negative thing for everyone. In fact, I’m finding it hard to believe more people aren’t seeing the benefits of Pokémon GO.

Typically on our walks around the neighborhood, we see a few people here and there. This past week, the pedestrian traffic in our neighborhood seems to have increased greatly. At any point in the day, I see people walking, phones in hand, waiting to catch elusive, imaginary creatures.

I GUESS THIS MAKES ME THE GYM LEADER!!! pic.twitter.com/RlnjRAztpT

My husband is a prime example. Typically one to choose the couch over any type of outdoor exercise, he’s been more than willing to take a one to two mile walk every single evening this week. We’re both finding our walks more enjoyable. Where we might have cut our walk short before, suddenly we’re finishing the lap because we want to reach the Pokémon stop.

In a country where obesity is on the rise, shouldn’t we be happy about giving people motivation to get moving? Does it matter if it is a “childish” game that gets us off our couch?

2. Parents are spending time with their children.

This week, I’ve heard parents talking about how suddenly, they have a way to connect with their teenagers through this app.

Naysayers of the app will argue these parents should be finding non-technology related ways to spend time with their children. Still, Pokémon GO touts an easy-to-use format that teenagers and less-than-tech-savvy parents alike can enjoy. Furthermore, understanding the game can help parents be assured children are playing safely and avoiding tragedies that have been coming up in the news.

3. Children are playing games and getting outside.

For years, I’ve been hearing complaints about children in the new generation not wanting to play outside. Pokémon GO is fusing the “play outside” generation of the past with the technology loving generation of the present. I think it’s giving our kids the best of both worlds. Kids are still playing their games, but outside, in nature. The solitude of video and computer games has been transplanted with an arguably more social game―rarely do I see children hunting Pokémon on our street alone.

How many times do you stop to really explore your neighborhood?

For me, the answer before this week was: rarely.

Most of us become cocooned in our individual lives. The neighborly feel of the 1950’s television shows has, in many areas, been replaced by a feeling of solitude.

This week, though, I’ve felt more connected to my neighborhood than ever. As my husband and I wander through the town celebrating victories over rare finds, we’ve talked to more people than ever. We’ve smiled at people also celebrating victories and even gotten some tips from fellow trainers. We went for a late-night walk with another couple, spending time bonding over a search for the best creatures.

Despite social media claims that Pokémon GO is ruining relationships, I’ve found this week, my husband and I have spent more time together having fun than we did before the app was available. We’ve seen and appreciated more sights in our small, quiet town thanks to the app that relies on our ability to navigate landmarks.

Furthermore, charities are also finding ways to connect avid players with neighborly causes. Some animal shelters, for instance, are giving players the chance to use their creature hunting skills to help animals. A sense of “real life” community can be built using the app as a foundation; it just takes some innovation.

Let’s be clear: I’m not a gamer girl by any means. I’ve played one video game in my life (State of Decay) and one computer game (Goat Simulator).

However, the potential of where augmented reality gaming could go is exciting, even for a non-gamer like me. I’ve read posts on Facebook about people speculating how cool it would be for an augmented reality game to be based on Harry Potter. My inner bookworm rejoiced at the mere thought of traversing my neighborhood in search of Horcrux or magical potion. It’s exciting to see the possibilities becoming realities.

Clearly, there are concerns and issues that have surfaced this past week with the Pokémon GO craze. With millions of downloads and players, it’s no surprise there’s been an uptick in horror stories surrounding the game. However, I think we should stop being so hard on the app and realize it’s also doing amazing things.

Like it or not, Pokémon GO has swept through the nation and claimed millions of new trainers. Perhaps soon it will go the way of the Tamagotchi of my childhood, fading into oblivion. Until then, perhaps it would do us good to start seeing some of the positives. I’m not suggesting we stick our heads in the sand and pretend Pokémon GO is the best thing to happen.

As with so many things in life, however, it’s up to us to decide if we’re going to persevere on the hunt for ways to make Pokémon GO a positive cultural contribution.

Lindsay Detwiler is a contemporary romance author. To find out more about her works, visit www.lindsaydetwiler.com. 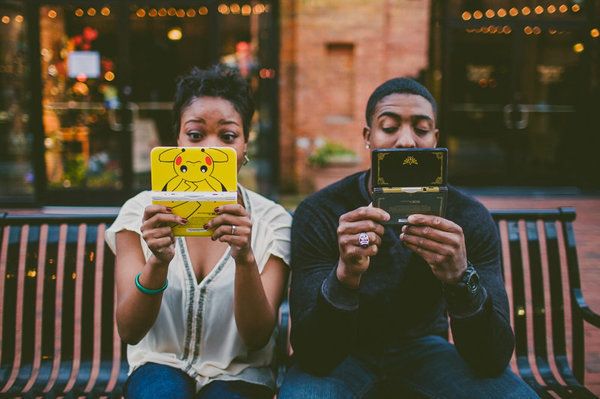 1 / 18
Show that Pikachu pride during your engagement pics.
<a href="http://www.carolynscottphotography.com/">Carolyn Scott Photography </a>