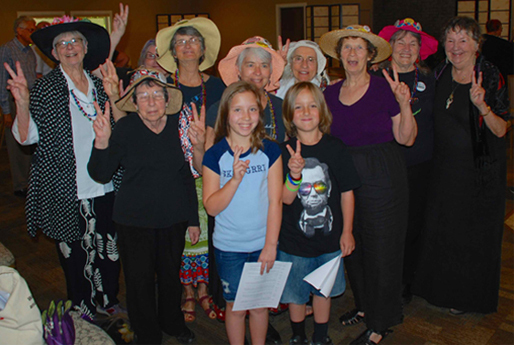 Chapel Hill, North Carolina, has been recognized as a progressive town in North Carolina and the U.S. South. Home to one of the oldest public universities in the nation, this town has played an important role in the civil rights movement, the anti-war movement and other social justice movements.

The town of Chapel Hill welcomed Syrian refugees, in response to Gov. Patrick McCrory's call to halt the future resettlement of Syrian refugees in North Carolina. Chapel Hill's progressive character was on display during Memorial Day commemoration on May 30, 2016. Titled "Hearing the Voiceless: Refugees at Home and Abroad," this event commemorated the sacrifices of the veterans, as well as, the suffering of the victims of wars, including the refugees.

Monday's event brought together members from many peace and social justice organizations gathered under the umbrella of Orange County Peace Coalition (OCPC). Jan Broughton is co-chair of the OCPC and the president of the American Ethical Union, a national organization that pursues secular humanism. She has connected issues of the death and destruction in the wars to "bread-and-butter" issues at home, including housing needs, livelihood for people and re-settlement of refugees. Jan has participated in informational events exploring the costs of war. North Carolina legislator, Rep. David Price, has attended one of those events. Jan is currently dedicated to the cause of raising the minimum wage in the Triangle area of North Carolina.

Wes Hare co-chairs the OCPC. He was active in the campaign against poverty in the 60s and the 70s. He became acutely aware of the toxic mixture of poverty, racism and war that reinforce each other. Martin Luther King, Jr., famously referred to racism, economic exploitation and militarism as "triple evils" that need to be defeated, during his famous Beyond Vietnam speech at Riverside Church in New York in 1967. Wes became active in the peace movement after the 2002 Iraq war and the impeachment movement against President Geroge W. Bush. Wes is also inspired by the Palestine freedom work by his fellow congregants at the Church of Reconciliation in Chapel Hill and by the work of Chapel Hill-based organization called AIME (Abrahamic Initiative on the Middle East).

The event on Monday displayed hard work by Jan, Wes and dozens of organizers ranging from organizations like Women's International League for Peace and Freedom - Triangle, Veterans for Peace - NC Triangle Area, Charles M. Jones Peace and Justice Committee of the Community Church of Chapel Hill Unitarian Universalist, Balance and Accuracy in Journalism, Coalition for Peace with Justice, Peace and Social Concerns of Chapel Hill Friends Meeting, and Elders for Peace. The event featured proclamations by the towns of Chapel Hill and Carboro that honored the lives of men and women of the armed forces who sacrificed their lives. These proclamations also called for building a peaceful society and helping the victims of war, including the refugees fleeing from violence and the aftermath of war. Speeches were interspersed by cultural performances and eulogies for the victims of war. Triangle chapter of the Raging Grannies offered powerful performances to highlight the sufferings caused by wars and occupations.

The highlight of the event was the focus on refugees and a rise in Islamophobia. A relatively peaceful and progressive town of Chapel Hill became a global headline when three Muslim students were murdered there last year. Institutional forms of oppression against Muslims and other marginalized communities, including the LGBTQ community, have increased in North Carolina in the recent years. North Carolina General Assembly passed transphobic law, House Bill 2, earlier this year that also robs such municipal powers as increasing the minimum wage. North Carolina General Assembly passed anti-Sharia law in 2013. A version of that bill was tied to legislation on women's reproductive health.

These developments have emphasized the need to build an intersectional movement that connects campaigns against Islamophobia, homophobia, racism, sexism, anti-immigrant attacks, anti-worker attacks and other oppressions. Participants rallied to the idea of connecting local social justice movements to the global movement for ending militarism and wars. In the words of MLK, Jr.,