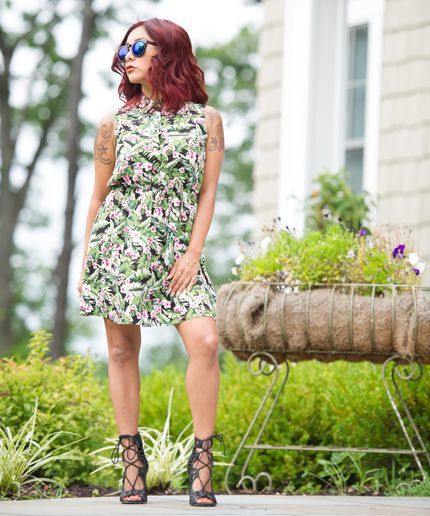 The year was 2009, I had just moved to New York City, and it seemed that everyone was talking about this new television show on MTV: Jersey Shore. Having grown up in the Midwest and gone to school in California, the kind of person the Jersey Shore cast represented was totally, completely, 100% foreign to me. Who were these magical people who made sure that even the most mundane tasks they did -- laundry? --was something to be excited about and stoked on? Who was this tribe of people for whom gender roles were so fixed, but still different from the norm -- where women were as open about their sexuality as the men, and the fellas were as obsessed with their eyebrows as the ladies? But, most important, who was this Snooki? This person who dressed like a cross between all the members of the Spice Girls, Keith Urban, and Tila Tequila? It was outrageous, it was weird, and it was unique. How many other reality-show stars can say that they coined both a hairstyle and a shoe trend?

Fast-forward to 2015. Flipping through an issue of WWD one day, I came across an ad for the trade show Magic's 20th anniversary. Fronting the campaign was a chic redheaded model wearing a tropical-print dress and lace-up heels. I nearly fell off my chair when I saw who it was: "Lovanna by Nicole Polizzi," it read. "Meet Nicole 'Snooki' Polizzi at Booth #72801."

When I spoke to Polizzi later that week, she expressed a similar sentiment: "People who actually get stuff done in the fashion world are in [WWD], so the fact that they put me in there was literally a dream come true." For the past few years, Snooki has undergone a transformation in many ways -- she's retired her "Snooki bump," she's launched a successful line of businesses, she's the mother of two children, and she's gotten married (she stood by her husband, Jionni, after it was revealed that his email was tied to an Ashley Madison account). Her clothing choices have changed, too -- but it's not because she's over that Jersey Shore look and regrets ever wearing it. "I definitely love tight dresses and leopard print, still," she says. "But after settling down with Jionni, having children, and growing up as a person, I realized that I wanted to grow up with my style, too. I still have fun with my outfits, but there's a limit. But you can't live for other people. You can't be like, 'I'm going to wake up today and please as many people as possible.' You have to please yourself and do what's right. Screw what other people think."

There are many celebrities who have made their way from the media's "worst-dressed lists" to the top of the "best-dressed," who look upon their pasts with disdain and embarrassment. But not Polizzi. Though she has moved along society's "taste" scale, it's not really because she's bending to pressures to conform. The recent press she's gotten has, frankly, come as a surprise: "I've never really had a positive relationship with the fashion industry. It's always, 'Worst dressed,' 'What is she wearing,' blah, blah, blah.... I feel like ever since these past couple years that I've grown up, everything is becoming so positive. I don't know how to react, because I'm so used to people being negative."

Lovanna is Polizzi's third fashion label (she has Snooki Love, which stocks more casual clothes, and SLNP -- Snooki Love Nicole Polizzi -- which is about club wear). Lovanna's styles will skew more sophisticated and elegant, and will be a littler pricier, which is important to Polizzi. "I've always been a bargain shopper. Even when I started making money from TV, I didn't change. I did buy my first Louis Vuitton bag, and that was cool, but I still shopped at Forever 21 and Charlotte Russe. Everyone wants to be the most expensive designer, but not me."

Read The Rest On Refinery29!