Roughly 40 percent of Americans don't own a landline phone, and a further 18 percent have a landline phone, but mostly use their cellphone. In response to this, many pollsters are conscientiously including cellphones in their polls. The Pew Research Center, for one, made a high-profile splash on cellphones recently when it announced it would dial 60 percent of its interviews via cellphone.

In today's world, quality pollsters must guarantee their polls include cellphones, and poll consumers should demand the same.

Today, a majority of people are difficult or impossible to reach on landline phones.

The cellphone industry estimates that in December 2012 there were 326 million active cellphones in the United States -- that's 1.04
cellphones per man, woman, child and baby. Meanwhile, as of the first-half of 2013 (the most recent comprehensive cellphone usage estimate), 38 percent of Americans didn't have a landline phone. One-third of landline owners mostly used their cellphones for calls, too, meaning a year ago not even half of Americans (44 percent) had a landline phone and used it as more than a backup phone.

The growth of this cell-heavy demographic since 2003 is striking: 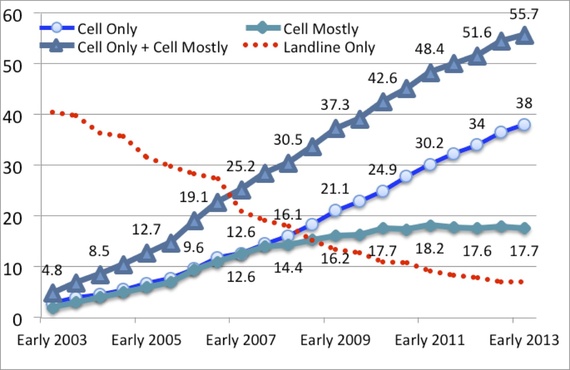 The CDC did not measure cell-mostly households prior to 2007, so those older numbers are rough linear estimates.

People who have landline phones are demographically different than people who don't.

Cell-only adults are different than landline owners in many ways, including some that affect political opinions. For example:

Three-quarters (75 percent) of people were cell-only that share a place with a roommate they're not related to.

Cell-only voters are politically different than landline owners too, even within demographic groups

However, pollsters can't just fix the problem by replacing younger, more racially diverse cell-only people with those same types of people who own landline phones. The below chart that even among these groups, cell-only people are more Democratic than landline owners:

Leaving cell-only voters out of polls has biased polls toward Republicans.

Landline-only polling problems went deeper than just Mitt Romney's widely-covered polling problems. For example, in the 2012 U.S. Senate race in Indiana, after Republican Richard Mourdock said that a pregnancy resulting from rape was a gift from God, our late-October poll that included 20 percent cellphones showed Joe Donnelly leading by seven points. Mourdock's pollster showed Mourdock with a two-point lead, and Donnelly won by six. More broadly, Nate Silver in his 2012 after-action report correctly cited polls that "called only landlines or took other methodological shortcuts" as polls that "performed poorly and showed a more Republican-leaning electorate than the one that actually turned out."

Doing polls right and dialing cellphones is expensive and time-consuming. For starters, a lot of technological advances that have made political phonecalls and telemarketing cheaper (and more annoying) have kept polling costs from ballooning, too. But federal law says cellphones must be dialed by hand, meaning they are more expensive to call. The law also means pollsters who use only cheaper automated-recording calls -- "Press 1 if you are supporting Barack Obama" -- are legally barred from including cellphones in their polls.

A huge number of cellphones are also owned by people under 18, who we must hang up on for voter surveys. And finally, pollsters have to spend time calling (and gracefully hanging up on) people whose area code says they are in one state, but actually live all the way across the country. These and other factors combine to make the cost of a cellphone interview more than double the cost of a landline interview in the worst-case scenarios.

The midterm electorate is likely to be much older and whiter than 2012 voters, two audiences that are comparatively light on cellphone usage. For this reason, 60 percent cell-dialing like Pew does with polls of adults would be too much. Including 15-20 percent cell-only is more accurate.

As many as 55 percent of adults (and 33 percent of 2016 voters) are likely to be cell-only by 2016 if current trends continue, a combination of people unsubscribing from landlines in the next two years and the electorate getting younger and less white again in a Presidential election year.

3. Cell-mostly populations must be reached via landline and cellphone.

To their credit, Republican pollsters including the highly-professional Public Opinion Strategies have now recognized the need to dial cellphones. Including cells, and a lot of them, will not be the only measure of a quality poll in 2014 and 2016. But campaigns, the media and the poll-consuming public should be skeptical of any poll that doesn't include cellphones.

Brian Stryker is a Democratic pollster at Anzalone Liszt Grove Research, a public opinion research firm that polled for the Obama campaign in the swing states of FL, NC, VA and NV.