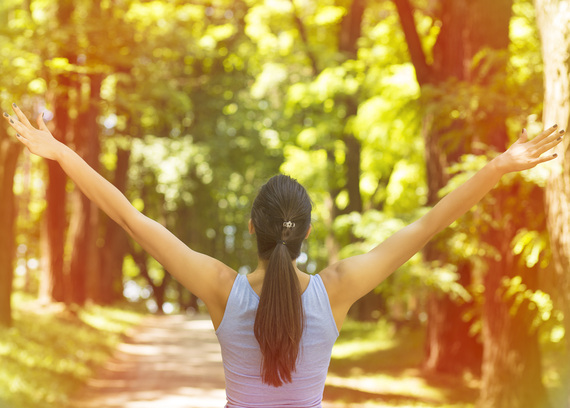 How many of us, especially females, have spent time during our adult lives thinking we were imposters, not good enough to be where we are or doing what we're doing? I'm talking about careers, athletic endeavors, parenting, presentations, running the school PTA, or hosting your book group. You name it, and many of us can conjure up a time or two when we felt we weren't supposed to be there, hoping someone didn't discover we weren't good enough or simply didn't really know what we were doing to the level we felt was expected of us.

I can count beyond both hands when I've experienced the imposter angst. And being totally honest, I still experience those pangs in certain situations where I feel like a total fake, just minutes from having the truth exposed. But, it's time to make a change and put any fear or doubts behind us.

Enter the "power pose." In 2012, Amy Cuddy presented a TED talk that now stands as the second most viewed TED talk available. And, she will make you fear no longer. Amy Cuddy is a social psychologist at Harvard University who studies nonverbal behavior, discrimination, stereotyping and power. She has an amazing story herself that includes a devastating car accident when she was 19 that left her with a serious head injury and a 30-point decrease in her IQ. People told her to not expect much, including finishing college. Four years after her peers, she graduated. Now equipped with a Ph.D. in social psychology, Amy Cuddy knows what it's like to feel powerless, and knows what it means to feel the power.

Strike a pose
Body language says volumes. It affects how others see us, and it may affect how we see ourselves. If we cross our arms, slump down and make ourselves small in a situation, it's likely we'll feel less confident. But, if we show up with confidence and enthusiasm and strike the "power pose," it can affect testosterone and cortisol levels in our brains. And, chances are it might even impact our success.

The next time you are giving a big presentation, leading a meeting, making a big pitch, or some other action or event that gives you angst, I encourage you to try a power pose that Cuddy calls the star pose. Stand up, spread your legs slightly, raise your arms over your head into a stretched V and hold it for two minutes. Now, you are ready to conquer whatever you set your mind to achieve. I've tried this before a job interview. Hey, it's doable in a bathroom stall and no one is the wiser. And, while I didn't land that particular job I felt I'd conducted my best interview ever.

"Fake it until you become it."
I encourage you to take 20 minutes and watch Cuddy's TED talk. It's filled with nuggets worth tucking away in your brain to help you show up at all times. She will convince you that it's not about faking it until you make it, it's about faking it until you become it. Granted, this approach may have some limitations. I admit I'll never fake my way into becoming a supermodel, or saddle up with the Olympic marathoners and become part of the elite group. But, it doesn't mean I won't stop plugging away at my novel, one word at a time in the hopes that someday I'll have something. What's real is that we all deserve to show up and be who we are. So, let's do this!

When in doubt, break out the star pose. I dare you!

Debra Carnes is a working mom by day and blogger by night. You'll find this post and others on her blog at A Touch of Clash.