Interview with Gayathri Ramprasad, Author of Shadows in the Sun: Healing from Depression and Finding the Light Within 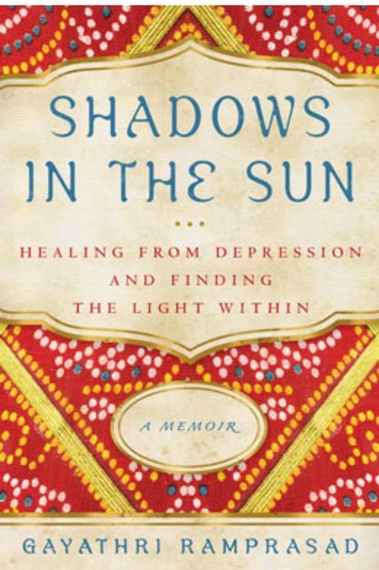 The just published memoir, Shadows in the Sun, is a first-of-its-kind, cross-cultural lens to mental illness through the inspiring story of the author's 30-year battle with depression.

Rosenberg: Your book gives vivid images and details of your childhood, growing up in India. It seems like you were never alone, between your immediate family, your extended family and, later, your in-laws. Yet, psychologically you were totally alone.

Ramprasad: India is collectivistic culture and the Indian family can either be a fortress or a prison. When the "enemy" is mental illness, it is often a prison. Not because of a lack of love. But, because of a lack of understanding. As a culture, there are many myths and misperceptions about mental illness, and tremendous shame and stigma associated with it. If I would have been diagnosed with depression as a teenager when my symptoms started, my life would have been over. Perhaps, I would have never finished school or gotten married and I would have brought such shame onto my family, my sister might not have gotten married either. I want to point out, however, that once my family was educated about depression, they became the greatest support system I ever had.

Rosenberg: Has mental illness in India lost some of the stigma since then?

Ramprasad: Yes and no. There are a few people who are standing up and speaking out about their mental health experiences, but the stonewalls of stigma, shame, and secrecy are still intact. Recently, I met with a group of Indian professionals struggling with mental health issues, while working with ASHA International, the nonprofit organization I founded to promote mental-health awareness, hope and holistic wellness. All of them told me they admired how I was speaking out about my struggles with mental illness and breaking the bonds of silence but they could not do the same thing. Medical professionals said they would lose their clients' respect. An engineer said he would lose his job. A stay-at-home mom said it would hurt her children and bring dishonor to her family. When I visited a government hospital in India, fairly recently, there were hundreds of people camped out on the hospital grounds. They had come from miles away on trains and auto rickshaws just for a psychiatric consult and were waiting for days. In India and many parts of the world, the situation is terrible.

Rosenberg: Your symptoms of depression began as a teenager and were heightened by your "desperate need to please others" and "perfectionistic attitudes," according to your therapist, who pointed out they were common traits in Indian culture. Later in life you found out that your father had also been diagnosed with depression. Why would he have not been more empathetic to you since he shared the disease? Why was your dad's struggle with mental illness kept a secret from you for so long?

Ramprasad: My father, like many men around the world, perceived the expression of emotions as a sign of weakness and suppression of emotions as a strength. He had difficulties accepting his struggles with depression, and, therefore, couldn't empathize with my pain. Looking back, it was difficult for me to understand how my mother could have considered my father's suicidal behavior -- wanting to throw himself under a bus, for example, and other things -- "normal." She said they did not tell me because they didn't want me to "worry about it." My parents, like millions of people in many cultures around the world, were imprisoned by ignorance about depression.

Rosenberg: Did your dad's depressed behavior start after you left the house?

Ramprasad: Growing up in a patriarchal culture where a man's temper is his prerogative, my father's flare-ups were a mere fact of life. While my father is a very loving man, to this day, he regards the show of emotions as a weakness.

Rosenberg: Your recovery story includes the Twelve Step principles like surrendering to a higher power and powerlessness. Both self-help recovery and the advice to "snap out of it" that is often given to depressed people rest on individual self-reliance yet they are complete opposites. Can you explain the difference?

Ramprasad: I think the one word that captures the difference is "knowledge." When you don't understand what is happening to you, you can't "snap out of it." I finished college, married, emigrated to the U.S., had a child -- I did everything I was supposed to do to snap out of it. But I lacked the knowledge. I did not understand how pregnancy caused my symptoms. I did not understand that I had the genetic predisposition to depression. I certainly did not appreciate how much early experiences had affected me.

Rosenberg: Your first depressive episode began when you failed math even though you were a good student. You discovered that a male student had maneuvered the failure because you had rejected his advances.

Ramprasad: Yes! And, as a young woman born and raised within the Indian culture, I felt utterly powerless to confront him, even when he threatened to rape me. Unfortunately, women continue to be victimized in India even today. And, despite all the media attention on the recent gang rapes across India, we as a culture are striving to ensure that justice is served.

Rosenberg: Was there a moment when your recovery from depression began?

Ramprasad: Yes. When I was stripped of all freedom and human dignity in an isolation cell. Until then, I blamed everyone else, God, my parents, my society, my husband, my culture. But in the cell, I realized I was the only one with the key to set myself free. I realized that I was not evil, an ingrate, weak, a drama queen, possessed or being punished -- all the names I was called and had internalized. That is when I discovered the light within me -- the light of love, wisdom, courage and compassion that has sustained me on my journey to wellness.

Rosenberg: In Shadows in the Sun you also discuss the people who helped you along your journey.

Ramprasad: Yes! I had never had a roommate other than my sister. My roommate in the hospital, Sanya, demystified mental illness for me. I could see myself for the first time through her. There were also women I worked with who shared their stories with me and let me know I was not alone or different by having mental illness. There was also a wonderful nurse I write about in the book. Probably the strongest influence was a woman named Aida, the wife of my husband's boss. She was a mother figure and she embodied everything I wanted to be when I grew up. She instilled in me the conviction that I could make it despite the mental illness and made me promise I would not kill myself.

Rosenberg: One thing that is remarkable about your story is how even though you were in the United States, it was Indian practices like pranayama and meditation that finally helped you.

Ramprasad: Yes -- I write in the book that India gave me my roots but the U.S. gave me the wings to fly.

Rosenberg: Despite experiencing psychotic postpartum depression with your first daughter, you were able to have a second baby through practicing pranayama, transcendental meditation, nutrition, exercise and other factors. You used no drugs!

Ramprasad: I am not opposed to medication and it has worked wonders with my brother and sister. But for me, the antidepressants and antipyschotics were anti-life and anti-wellness. They were supposed to abate my symptoms and they exacerbated them. They made me more depressed and more suicidal. Now, we know more about those drugs and they have black box warnings. My husband and family would say to me you have the best doctors, the best health care, the best medication -- what is wrong with you? The medications were hurting me. I was lucky my doctor and family supported me going off drugs. Western medicine focuses too much on treatment, including medication and not wellness.

Rosenberg: You have parlayed your journey into ASHA International to help others struggling with mental illness and social stigmas, especially in other countries.

Ramprasad: Yes. I would not wish my experience on anyone else. But those who go through such experiences have an obligation to use them to help others -- which is what I am doing. We need to embrace our loved ones who have mental illness and not hide them away as is too often done.

Gayathri Ramprasad is the Founder and President of ASHA International a nonprofit organization promoting personal, organizational and community wellness. She is the author of Shadows in the Sun: Healing from Depression and Finding the Light Within.