When I was pregnant with my second child, my husband and I affectionately (and jokingly) began to refer to him as "Baby Chopped Liver." You see, we already had our firstborn -- our golden child, our prince, our special, special boy. And though I wouldn't have admitted it at the time, while pregnant, I thought to myself often that I would always do my best to make Baby Chopped Liver (hereinafter referred to as "Little BCL") feel like he was loved just as much as his brother, even though it obviously could never be true. In my ninth month of pregnancy, I sat on the floor of my son's bedroom and cried as I read to him, mourning that our time alone together was coming to a close. I might have even resented the fact that, despite all of my wishes for a second child, there was going to be another human being who would need me and detract my attention from my perfect son. I thought, how on earth could I possibly love anyone or anything as much as my firstborn? 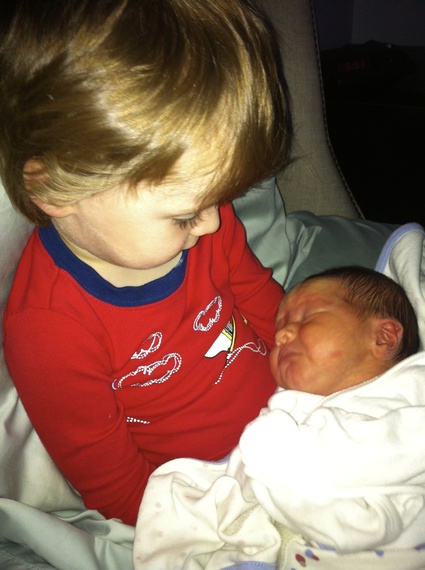 And then Little BCL was born. They placed him in my arms and he was tiny and perfect. And he looked up at me and gave me that look -- you know the one. He opened up his eyes and looked straight into mine and I could almost hear him say, "Hi Mom, I've been waiting to meet you." And months down the line, when my firstborn was throwing tantrums and picking his nose with abandon, Little BCL was napping and cuddling and cooing and smelling like all of those wonderful baby smells you forget about once you have dirty toddler diapers and dirty toddler hands to battle. Let's face it, a 2-month-old's diaper is a much more pleasant changing experience than a 2-year-old's! So, the impossible did happen. I loved Little BCL as much as my firstborn -- as much as anything in the world. All it took was meeting him for the first time.

A lot of my friends are now pregnant with their second children, and I am starting to hear them talk about the same worries and fears that I had during my second pregnancy. One friend expressed that her greatest excitement in being pregnant with a second child is that she is giving her firstborn a sibling. Poor second child -- destined to be the younger sibling her older sibling always (probably) never wanted.

Much has been made in recent times of the effects of birth order on developing personality, with researchers asserting that birth order plays just as important a role as gender and genetics in determining personality traits. And it does make sense. After all, we are different parents with each child that is born. My firstborn is the only child in my family who will ever be an "only child." He spent his alone time being revered, doted on and photographed constantly. And my second-born, Little BCL, was born into a world where his needs and demands were not always immediately met, but rather often subjugated or shared with the needs of his older sibling. Of course he is doted on and photographed, but with much less frequency, and he often has to share the camera frame. In fact, everything from his clothes and crib to his toys and potty seat were someone else's before they became his. He was born into a world where he was affectionately, I must stress again, referred to as Little Baby Chopped Liver. But he was born with parents who were more relaxed about parenting and were old pros at many of the little things that stressed out the parents of his older brother, which must count for something.

So, my fears were unfounded. I have not, for one minute, had to pretend to love Little BCL as much as his older brother. That came entirely naturally. And I never resented him for barging into our happy little party of three. If anything, he has made this family richer with his presence, and his father and me more laid-back and better parents. And I love the fact that I was able not only to give my firstborn a sibling and companion, but also to bring Little BCL into the world with a sibling already here for him. Only time will tell what sort of lasting impact the birth order will have on each child's personality, but for now, we are having a great time watching them get to know one another.

I'm A Stay-At-Home Dad Who Felt Like An Outsider At Playgroup. That Has To Change.