First, let's start a year ago. Stepping off the plane at Las Vegas Airport you knew it was bad back in 2009 when a line of cabs stood waiting. It was, as we walked the almost empty halls, a sure sign that the consumer electronics industry was in terrible trouble and that bode poorly for the media biz, the ad biz and the economy in general. That was 2009.

So if CES is something of the embodiment of an economic Ground Hog peeking its head out to see if winter is over, then this year's Punxsutawney Phil did not disappoint.

Stepping off the tarmac and into the almost impossibly long taxi line, you knew that CES was BACK Baby! And three days did not disappoint. There's more innovation, more new tech, more software, more hardware and more platforms. Its almost as if one business ended and new one began.

While it would be easy -- and fun -- to provide a laundry list of new innovations that have turned the corner, instead I'm going to tell you my three most significant observations and, I hope, help you catch the fire that I did along with 112,000 other people jammed into the convention center

Let's start with the one that everyone is writing about and see if we can debunk a few things. Last year, there was a rumble (not quite yet a buzz) about 3D. And I wrote a pretty snarky thing about smell-a-vision and how 3D would never happen. Well, I was wrong. And way wrong, for reasons I didn't entirely understand. 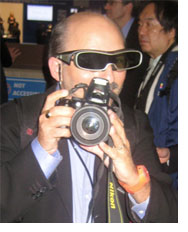 It's easy to tie Avatar to the explosion in 3D but that of course isn't right. LG, Moto, Sharp, Sony and all the other flat screen folks didn't rush 3D to market after the holiday box office. They'd all bet big a year ago and this was the coming out party. Avatar's huge success certainly makes it look sensible in hindsight, but the fact is -- this IS the next big thing in home entertainment.

Two reasons that you wouldn't expect. First gaming. Games are already digital worlds. Shifting a 2D game to a 3D game is easy and will add a huge new immersive experience that will pump up sales of screens (both computer and flatscreen) and increase the sales of the software. So gaming will drive 3D. But the one thing I saw that totally blew my mind was a 3D Menu system by Motorola. It was so cool to see all your shows, music, pictures and such in a 'cover flow format' floating in midair. I wanted to reach out and tough the navigation. And that can't be far behind. Very sci-fi, very cool. 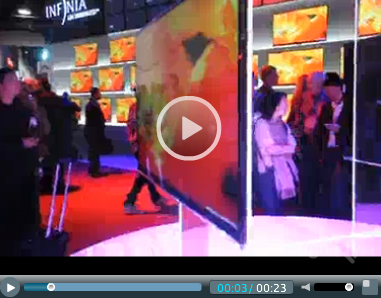 Second, the D-Link Boxee Box. After wading through crowds in the hall, the Boxee preso didn't disappoint. Once again Boxee was demoed by volunteer fans (though this year with a bit more show biz polish and cool tattoos). Boxee is driving huge anticipation for the device, the first over the top solution for web video to the flat screen that will sell in Best Buy. It also won the annual "Last Gadget Standing" competition at CES. Nice job Team Boxee. 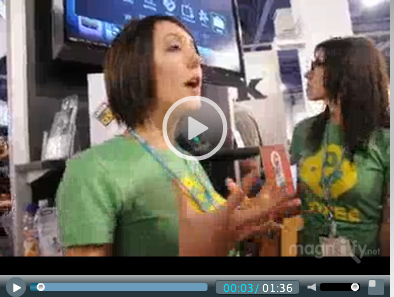 Third. Sony. Yes the screens and 3D was amazing -- but that isn't where I'd point you. For me the big changes were in content gathering at Sony. They, for the first time, announced that they're going to let Memory Stick slowly fade away and let the SD card standard emerge. This is important as it clears the way for the 'us and them' battle over memory in consumer devices to end. About time. Secondly, Sony Consumer showed its first EVER device with an XLR mike connector. May not seem like a big deal to you, but a consumer camera that records to flash memory with XLR connectors is a pro camera by any measure. And at a below 4k price point, this is a major shift for consumer gear to get serious. The last piece at Sony is the Bloggy. Ok bad name, and it replaces the Webby -- but here too Sony is stepping up with a $169 camera that will give Flip a run for its money. Cisco may have hoped that Sony was going to cede the sub $200 video camera market, but it appears that's not going to happen.

Sony is bringing its Pro Video firepower to the folks who are capturing and sharing consumer video content in a big way. And that only means good things for the future of video on the web. 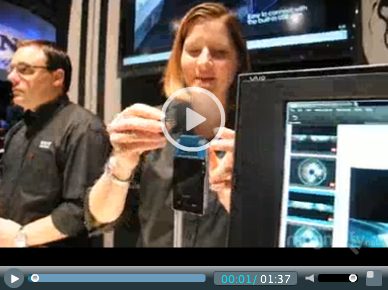 And for bonus points. This is the year of the Reader/iSlate tablet thingy. Amazon didn't show anything new (or if they did I couldn't find it) but Apple is just days away from a throw down. Don't let all other entrants distract you Apple/Amazon is the battle to watch -- as they've both got the largest collection of content and publisher relationships to bring to their platforms.

Overall, CES 2010 has to be one of the strongest shows I've ever seen. There's a significant shift as businesses that used to be separate: content and technology -- find that they are now very much part of a shared ecosystem. Players like Sony, Apple and Amazon may seem as different as companies can be, but in the world going forward they're going to find themselves more and more alike. That's the next chapter in the evolution of media -- and one worth watching closely.