The Canadian government in early March announced this year's quota for its annual, and highly controversial, seal hunt. The allocation for 2015? 468,000 harp, hooded and grey seals.

In an effort to minimize inhumane treatment, the Canadian government mandates that seals can only be killed using a high-powered rifle or shotgun, a club or a hunting tool called a hakapik. Yet with the hunt in full swing, last week Humane Society International released shocking footage of baby seals being shot, clubbed and dragged aboard hunting vessels -- footage that, the group alleges, shows the hunt is anything but humane

Rebecca Aldworth, executive director of HSI's Canada chapter, told The Huffington Post that despite the legal protections, "what happens to these baby seals is some of the worst suffering I've ever witnessed." She spent last week in a helicopter off the northeast coast of Newfoundland getting a firsthand look at the seal hunt -- her 17th year doing so. 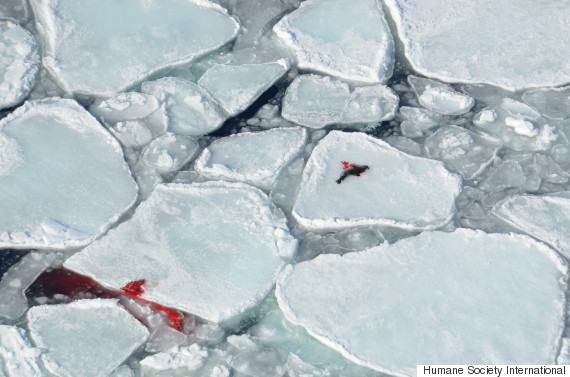 "Ever year we go out there, we see the same kind of cruelty," Aldworth said. "The seal is moving on the ice, the ice is moving on the ocean and the boat is rocking on the waves, so you often see a seal that's just wounded because it's incredibly difficult to make that shot."

The hunt takes place in northeastern Canada between November and June, with the majority of the seal hunting happening in March and April. The animals are killed mainly for their furs, and young harp seals tend to be in the highest demand because they have the most valuable pelts.

The Canadian government maintains that safeguards are in place to ensure animals are killed quickly and humanely. When asked about the scientific rationale for the hunt, a spokesperson for the country's Fisheries and Oceans Portfolio directed HuffPost to an online FAQ page about the seal hunt. 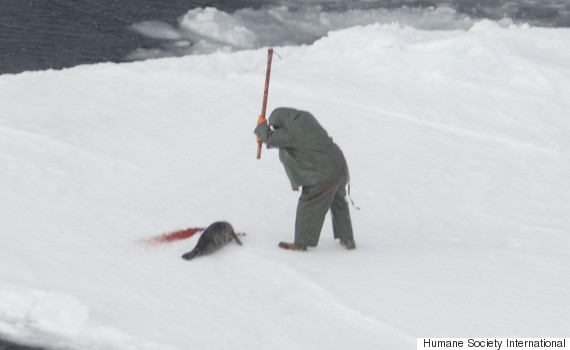 The huge annual quota is all the more surprising given that the number of seals harvested each year has fallen dramatically over the past decade, thanks to a shrinking market. Around 94,000 animals were hunted in 2013, down from about 366,000 in 2004. Harp seal populations in Canada are nearly three times what they were in the 1970s, currently numbering close to 7.3 million animals.

The Canadian Sealers Association recently announced that it will scale back operations in light of the difficult financial situation caused by a constricted commercial market. Carino, the top buyer of sealskins in Canada, said it wouldn't be purchasing any pelts this year because it already has a stockpile that didn't sell in 2014.

The lower demand is partially a result of growing international concern for animal welfare. The entirety of the European Union banned the trade in 2009 due to worries about the inhumane nature of seal hunts in Canada, Greenland, Namibia and other countries. Canada appealed the decision to the World Trade Organization, but the agency upheld the EU ban in 2014, noting it was "necessary to protect public morals" related to animal rights.

In the U.S., trade in seal products is banned and all species of seal are protected under the Marine Mammal Protection Act of 1972.

Captain Paul Watson, founder of the marine wildlife conservation group Sea Shepherd, told HuffPost that while his organization supports the work of HSI, it no longer actively opposes to the hunt due to the "collapse" of the market.

"There simply is no market today," he said. "Sea Shepherd's role has been to oppose the sealing ships, and there are no more ships on the water and in the ice killing seals."

Watson noted that despite the large number of seals designated for hunting through the government's quota, it's likely that fewer than 60,000 will be killed this year because of the lack of demand.

Aldworth told HuffPost that HSI is hoping to help broker a deal between the sealers and the Canadian government that would bring about an end to the hunt through a federal buyout of sealing contracts. She said the plan would be similar to the shift that took place when whaling was ended in the country in the 1970s. Parts of Canada now have a burgeoning whale-watching industry.

But for now, her group believes a single seal killed is one too many.

"HSI's concern is that the seal hunt is inherently inhumane. Because it's inhumane, it must be shut down," Aldworth said. "The only progressive thing to do, the only acceptable solution is to shut down the slaughter forever." 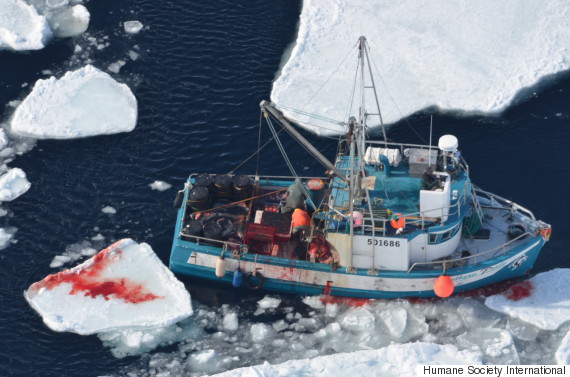