UPDATE (5:55 P.M. EST): Huffington Post Green Editor Katherine Goldstein, who is in Copenhagen at the COP15 Climate Change Summit, spoke to Andy Bichlbaum of The Yes Men earlier this evening about today's prank -- and Bichlbaum confirms that the Yes Men, were behind it. Asked about whether he thought he might be sued for today's stunt, Bichlbaum quipped, "Yes. I think Stephen Harper is so mad that he will personally sue us. And yes, so will the Wall Street Journal."

So, did you hear the one about Canada making a huge splash at the COP15 Climate Change Summit in Copenhagen by completely reversing its climate change policy and setting aggressive new carbon reduction targets?

Well, then you've heard about a high-concept prank, which seems to have been perpetrated by someone willing and capable of going to dizzying lengths to show policymakers what they should be doing to combat climate change.

We're guessing this is probably the work of the Yes Men, obviously!

This time, the world was fooled by a well-timed press release and a well-constructed facsimile of a Wall Street Journal online article.

The fun began this morning when the Yes Men put out the following release, purporting to come from the Assistant Press Secretary, of the Canadian Office of the Minister of the Environment. Here it is in full:

COPENHAGEN, Denmark -- In a major development coming three days before the final round of UN climate change negotiations in Copenhagen, and responding to the recent concerns expressed by the G77 bloc of countries, Canada's Attache for Environment and Planning announced today an ambitious plan for a new climate change framework that answers vital concerns voiced by developing nations.

"Today the G77 has again made their voice very clear," said Jim Prentice, Canada's Minister for the Environment. "This policy is our answer. Long in discussion, and slated for release later this week, Agenda 2020 is Canada's commitment to a science-based approach to climate change, and our way to assert our partnership with the developing world."

Agenda 2020 sets binding emissions reductions targets of 40% below 1990 levels by 2020 and at least 80% by 2050, in line with the recommendations of the Intergovernmental Panel on Climate Change (IPCC) and approaching the levels demanded by the African Group (link). The plan also introduces a new instrument, known as the "Climate Debt Mechanism" (CDM), committing Canada to much-needed funding to those developing countries facing the most dire consequences of climate change. CDM payments will begin with 1% and rise to the equivalent of 5% of Canada's GDP annually by 2030.

"We believe all people will benefit from an equitable climate deal that truly energizes the world economy," said Prentice.

The initial 2010 CDM outlay (representing 1% of Canada's GDP, or $13 billion) will be allocated to the African countries for emissions-reduction strategies and alternative-energy development programs. Payments will also finance resilience-building projects in specific communities already facing the results of climate change or threatened with its most dire consequences.

The CDM is the world's first financial mechanism that truly addresses the rising costs of climate change in developing countries. It follows a November announcement from Canada and its Commonwealth partners committing $10 billion to climate change adaptation for vulnerable countries (link). By providing quick access to adaptation finance, the CDM builds on this commitment and takes the global lead in supporting vulnerable countries. CDM payments will be completely separate from pre-existing development assistance and will be considered to be payments in a balance of trade.

"Canada is taking the long view on the world economy," said Prentice. "Nobody benefits from a world in peril. Contributing to the development of other nations and taking full responsibilities for our emissions is simple Canadian good sense. We want to show the world that Canada is a leader on climate change."

The full details of the CDM framework will be released when Prime Minister Stephen Harper attends the high-level session of the Copenhagen climate talks this Wednesday.

All of that: totally fake! But it was backed up online by a story by "Gustav Rainer" at the "Wall Street Journal," which reads in part:

Canadian delegates to the United Nation Climate Summit in Copenhagen announced a significant shift in the country's climate stance today.

The announcement, in part seemingly prompted by today's walkout of the G77 bloc of nations, represents a major change in tone and substance for the large energy-producing nation. The new plan, dubbed "Agenda 2020," details an aggressive new commitment to curtailing carbon emissions, and lays out the guidelines for a new climate adaptation fund for developing nations.

"This agreement tackles the core drivers of social and ecological vulnerability," said Matthew Delane, Canada's Attache for Environment and Planning in Copenhagen. "It's nothing less than a new vision of international responsibility."

UPDATE: And now, we've been punked! This press release, which appears to walk back the original fake press release is ALSO A FAKE. This is a tangled web being woven!

OTTAWA, Ont. -- December 14, 2009 -- One hour ago, a spoof press release targeted Canada in order to generate hurtful rumors and mislead the Conference of Parties on Canada's positions on climate change, and to damage Canada's standing with the international business community.

The release, from "press@enviro-canada.ca," alleges Canada's acceptance of unrealistic emissions-reduction targets, as well as a so-called "Climate Debt Mechanism," a bilateral agreement between Canada and Africa to furnish that continent with enormous sums in "reparation" for climate damage and to "offset" adaptation.

Unfortunately, the spoof release was reported in major international outlets.

UPDATE #2: Yet another spoof press release, this one apologizing for all the confusion:

OTTAWA, Ont. -- December 14, 2009 -- We at Environment Canada wish to thank the international press community for their measured and understanding response to the hoax that struck our agency earlier this afternoon, while expressing our condolences to the Ugandan delegation who were swept up in the excitement of this false future "vision."

This sophisticated operation was reported in the Toronto Star, The Globe and Mail, and a number of other outlets as the irresponsible spoof that it was.

Environment Canada wishes to stress that the Ugandan delegation's impassioned response to the announcement is a dramatic tragedy for those who stand to suffer the most.

"It is the height of cruelty, hypocrisy, and immorality to infuse with false hopes the spirit of people who are already, and will additionally, bear the brunt of climate change's terrible human effects," said Jim Prentice, Canada's Minister for the Environment.

Signs point to the Yes Men, whose primary way of pranking-the-world-in-order-to-save-it is to pass themselves off as representatives of an organization and make big splashy announcements about major policy changes. Recently, the Yes Men posed as representatives of the United States Chamber of Commerce, and staged a press conference at which they announced that the Chamber was adopting a more progressive stance on climate change policy. The Yes Men have also previously pulled off remarkably well-built newspaper facsimiles.

Last week, the Yes Men attempted to use projectors to turn the Hopenhagen Globe that sits in the middle of Copenhagen's City Hall Square, into a massive anti-Coca Cola billboard. Their attempt was quickly ferreted out by Danish police.

The Huffington Post's Green Editor, Katherine Goldstein, who is on the ground in Copenhagen, reports that sources close to The Yes Men were acting very coy, "smiling," while saying, "Who said it was the Yes Men?"

We hope to be able to say so soon!

UPDATE: For the moment, if the Yes Men had anything to do with this, they are remaining coy: 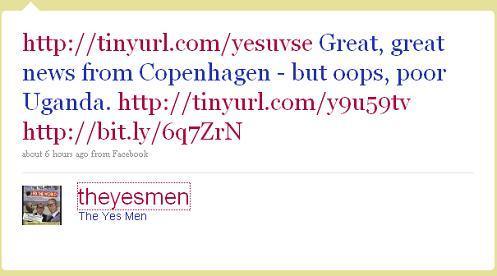 So many fakes within hoaxes within pranks. The best we can offer is this report from The Globe And Mail:

It's not clear who is behind all this but the suspicion is that it is the work of an American group called the Yes Men. They have pulled these sorts of stunts before, attacking the corporate world and globalization through their spoofs, which include making websites look authentic. The Yes Men, according to their spokespeople in the United States, are in Copenhagen and they are tweeting about the spoof.

"Yes, we have heard a bit about this hoax, we are investigating," Joseph Huff-Hannon, who works with the group, told The Globe in an email. "Word has it that more will be revealed tomorrow at 13:00 pm Copenhagen time. I hear that those responsible can't speak about it tonight though."

Any minute now, I expect a call from Copenhagen, or Ottawa, or Uganda, telling us that this report is a hoax, also.