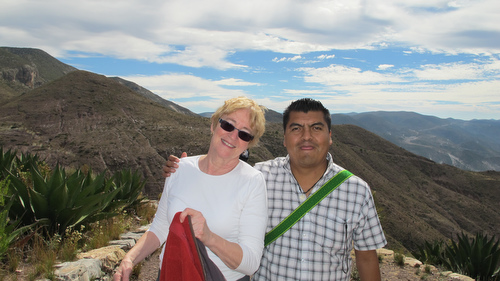 REAL DE CATORCE, Mexico - From the moment Maude Barlow passed under the crumbling stone arch and saw the first nopalera laden with red cactus fruits, she knew she was entering another dimension.

Accompanied by a retinue of Huichol leaders, activists and a wandering journalist, the Canadian author, public speaker and social leader was making her own pilgrimage to the Birthplace of the Sun. It's a journey the Huichols or Wixarika people have made for over a thousand years, coming to reconnect with the ancestors, light the candles of life and pray for the balance of all life on Earth.

Maude's mission was a different one. She had come to see for herself what was at stake in Wirikuta, this most sacred of Huichol holy sites, currently slated for exploitation by Canadian mining companies.

Her goal was to connect with the people being affected by these mining proposals and see what, if anything, the social action groups she leads can do to help. She had come to Mexico to participate in the Permanent People's Tribunal regarding the devastating effects of mega-hydroelectric projects throughout the region. And she wanted to investigate first-hand some of the impacts of Canadian mining companies in Mexico.

"We Canadians feel embarrassed and ashamed of what is being done in our names," she had said on the winding cobblestone road to this place. She had just paid a visit to the sad vestiges of Cerro de San Pedro, the colonial mountain town whose fate the defenders of Wirikuta hope to avoid. 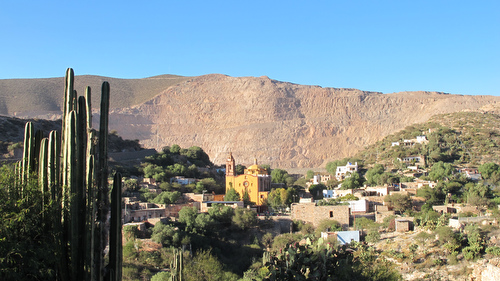 The iconic Hill of San Pedro, featured on the flag of the state of San Luis Potosí, is no more, and the charming colonial village that was once at its foot is a virtual ghost town. A battalion of heavy machinery gnaws its way through the surrounding hills, reducing them to rubble. Meanwhile, a 24-stream of trucks belonging to New Gold, a Canadian mining company, rumble back and forth down the dusty country roads, carrying the rubble to be ground into powder, which will be leached in cyanide and other toxic chemicals to extract the gold.

Despite its embattled past and present, the town has retained a poignant charm. Maude was captivated by the ride into the tiny village square. The hills surrounding us were honeycombed with ancient footpaths leading up into stony ruins, inhabited by a surprisingly verdant semidesert ecology: towering nopal or prickly pear, laden with ripe purple and cream-colored tuna or cactus fruit, various relatives of the mesquite, organ cactus, barrel cactus, agave, maguey. We climbed up a quiet hillside where an anti-mining activist had been laid to rest in the shade of a pirul tree, with a spectacular view of the town.

Mario Martinez, a mining company engineer turned anti-mining activist, was our charming guide. The energetic Martinez has dedicated nearly two decades to the fight to save San Pedro, and has nearly paid with his life, more than once. He showed us a vintage photo of the cathedral that hangs on his wall, with the famous San Pedro Hill in the background. I carry it up to the roof where I compare it to the current landscape. The eyes struggle to comprehend the loss. 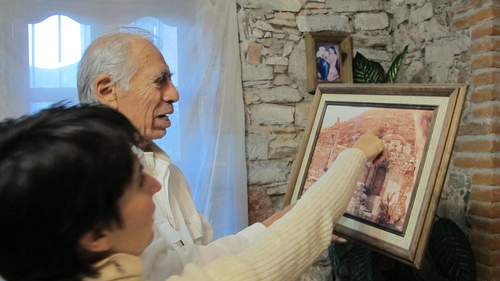 Martinez and other members of the group that has led the opposition to the mine, the Frente Amplio Opositor, or FAO, have been subjected to death threats, pelted with rocks and even warded off a machete attack. His e-mail account had been broken into, and he had ample evidence his movements were being monitored. He shared his story over a sumptuous spread made by local activists in Martinez' gracious colonial-era home, just a block from the empty plaza and historic Spanish cathedral at the heart of Cerro San Pedro.

As we stepped out into the dark night, Mario pointed out the odd silence around us. "Normally we would be surrounded by the noise of trucks and machinery," he said. "They turned it off just for you, Maude."

I thought at first he was joking; but he was not. FAO's sources had told them that local law enforcement - which works hand in hand with the mining company - had been advised of her visit, and that we were being watched. 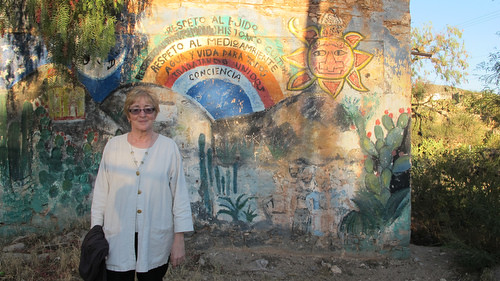 With this unsettling thought, we headed off on the three-hour drive up into the Sierra of Catorce. By midnight we made it to the former ghost town of Real de Catorce, established by Spanish silver miners in the 1700s and abandoned when the silver ran dry - at least according to the standards of the time. Today's mountain-chomping machinery and corrosive chemical extraction methods, combined with the skyrocketing cost of heavy metals, has provoked an explosion of activity in these abandoned mining sites.

The fact that this particular one is the most sacred site of one of the most authentic living pre-Hispanic cultures alive - and key to their continued cultural integrity - has not dissuaded the mining companies in the least.

We sank gratefully into the big comfortable beds in the spectacularly restored Hotel El Real and awoke just after dawn for an hour's ride by horseback to the famous Cerro Quemado, which means Burned Hill in Spanish. The hill is so named for the moment when the sun emerged for the first time from Cerro Grande, just across the valley, at the beginning of the Wixarika creation story.

We were met along the way by a handful of traditional authorities from the Wixarika Regional Council in Defense of Wirikuta, along with other leaders of the Wirikuta Defense Front. Maude began to thank the group for the invitation and to recognize them for their hard work to stop the mine and was quickly hushed.

"We don't know who's watching or listening to us right now," warned one of the activists, in English, so as not to be understood by bystanders. "So we are just going for a ride to the beautiful Cerro Quemado."

The situation has been increasingly tense here in the economically devastated Real de Catorce, with jobless mining supporters pitted against local environmentalists and those making their living from the tourism industry.

That tension has recently become much worse now that the government has issued a proposal to create a biosphere reserve in these parts, which would prohibit any use of the land by locals for agriculture, hunting, grazing, or any other income-generating activity - a proposal the Wixarika are completely opposed to, but they were not consulted. Making matters much worse is an active disinformation campaign sponsored by the mining company and blaming the Huichols for taking away the right to farm, hunt or otherwise earn a livelihood in the area.

Pascual Pineda, governor of the vast Huichol territory known as Santa Catarina, led the way on foot, with Maude and her retinue, me among them, following behind. She had been apprehensive about this equine expedition, never having been a horsewoman. 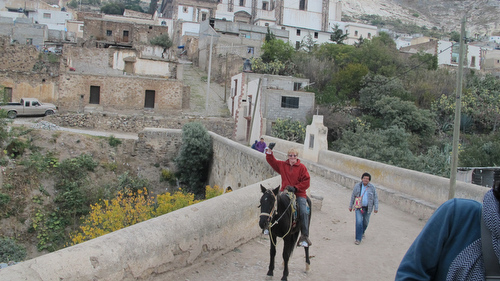 But the moment she crossed under the stone arch, she began to relax. "It was as if I was entering another dimension," she recalled. "It was so beautiful... I even stopped worrying about the horse. I knew I was going to be OK."

An hour later we were clambering up the last stretch of the Cerro Quemado, our horses tied up at the round stone house that serves as a rustic visitor's center. We crested the hill and saw in front of us the spiral of stones that marks the home of Tatewari, Grandfather Fire, and took our places around the circle. Here Pascual explained the significance of the Cerro Quemado in the Wixarika cosmovision as I translated. 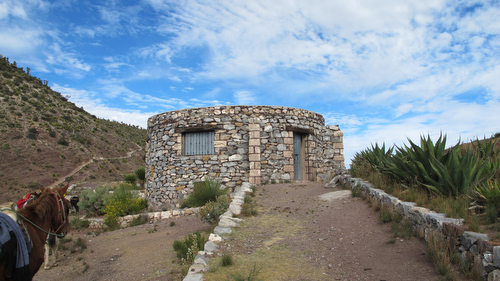 Santos de la Cruz, the young Wixarika attorney who has become a tireless spokesman for the defense of their sacred lands, spoke up. "This is our university," he explained. "We come to the desert to learn; we learn from our ancestors, and from the gods that live here. It's better than Harvard or Oxford. It's the university of the desert."

Here we left our offerings of candles and coins among the other offerings for Tatewari and continued on up the hill to the tuki, the small house that holds the offerings for the sun. Pascual offered up a prayer to the five directions and invoked the spirits of the sacred sites in each of those directions, and the other Wixaritari followed his lead, with prayers and offerings in their native tongue.

After the ceremony, I caught up with Maude as she stood amid the curious tufts of yucca and gazed out at miles and miles of desert, since time immemorial the home of Kayumarie, the spirit of the Blue Deer, and the Huichol hunting grounds for their sacred hikuri, or peyote. Destined to become an open pit mine, if her compatriots at Revolution Resources have their way. In the other direction, the town of La Luz, just on the other side of the mountain from Real de Catorce, destined to be the hub of First Majestic Silver, another Canadian mining company.

She shook her head quietly, and I saw a world of sadness in her eyes. "It just can't happen," she said. "We can't let it happen." 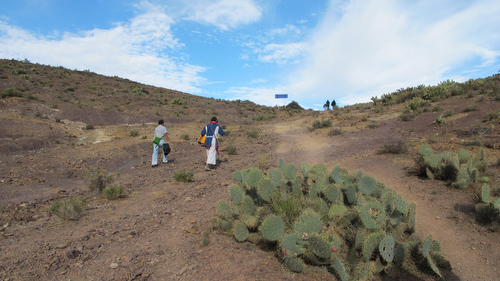 Back down in Real de Catorce, we kept quiet until we were safely ensconced in the conference room at the Hotel el Real, where local residents and Wirikuta Defense Front activists shared their stories, their strategies and their analysis of the government's recently released Biosphere Reserve Proposal. Besides the conflict-producing ban on agriculture, grazing and hunting in the reserve, the government proposal actually continues to allow mining in critical parts of the reserve. The group had struggled mightily to analyze and respond to the double-edged biosphere proposal, bringing together leaders from the far-flung Wixarika communities with lawyers and environmental analysts to develop a coherent response. Now, only five days remained until the deadline for comments. That would give outgoing President Felipe Calderón's administration two more weeks to declare the biosphere reserve, before they were out the door.

A long and intense meeting ended in a concrete proposal. In the five days remaining of the comment period, Maude would go home and activate her networks to submit a response. The Council of Canadians issued a letter to outgoing President Felipe Calderón, urging him to establish the Biosphere Reserve but with a ban on mining, land rights for local inhabitants and a long-term sustainable economic development program for the local inhabitants.

For more information about the Biosphere Reserve, click here. 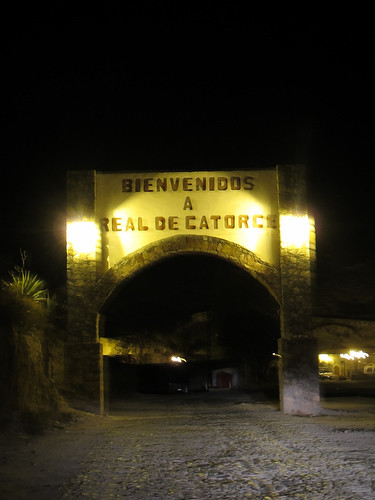