After conducting six years of research and over 6,000 survivor interviews, the commission's report found that what happened at the schools, and the broader aboriginal policy that they were a part of, "can best be described as 'cultural genocide.'"

A total of 139 of these residential schools, as they are known, existed across the country between 1883 and the late 1990s, with a sharp decline in operations after the 1970s. Many indigenous former students spoke with the TRC about their time at these institutions, detailing traumatic stories of being stripped of their cultural identity and, often, subjected to horrific assaults.

Canada's residential schools have been the target of numerous legal challenges, as former students and rights groups have sought to redress the wrongs committed against the nation's aboriginal people as a result of government policies.

Survivors settled a massive class-action lawsuit against churches and the government in 2007. Among other things, the settlement required the founding of a Truth and Reconciliation Commission. The commission began its work in 2009 and collected over 6,750 witness accounts over six years.

Canada's residential school system began in the late 19th century as a means of assimilating aboriginal youth into white colonial society through education and removing them of their cultural, spiritual and linguistic heritage.

The report notes that while addressing Parliament in 1883, Canada's first prime minister, John A. MacDonald, said assimilation could only be accomplished by removing aboriginal children from their families and community -- otherwise, he said, an aboriginal child would simply be "a savage who can read and write."

Authorities forcibly took children from their homes and put them into boarding schools, which were operated by Christian churches -- the majority of which were Catholic. "This was done not to educate them, but primarily to break their link to their culture and identity," the commission's report states.

Some of these abuses have previously been documented by rights groups and in legal cases. For example, the Canadian Broadcasting Corporation reported in 2013 that some schools conducted nutritional experiments on malnourished students in the 1940s and 1950s, in which children were withheld nutrients or kept on "starvation-level diets." The TRC report, however, is the likely most comprehensive, detailed and up-to-date account. The summary report released Tuesday contains hundreds of pages detailing decades of trauma, and survivors' stories were compiled into a lengthy additional document. A full six-volume document on the schools is set to be released later this year.

Among other findings, the TRC documented survivors being punished and beaten if they failed to remember the Euro-Canadian names they were ordered to take on in place of their aboriginal names. Many said they had their hair, which can contain spiritual significance for aboriginals, cut off.

The commission also heard numerous reports of horrific physical and sexual abuse at the hands of school administrators, including sexual assaults on children as young as five.

Over 31,000 legal claims of sexual assault in residential schools have been resolved, totaling almost 2.8 billion Canadian dollars in compensation. Criminal charges have also been brought against some perpetrators, including an 11-year sentence for former dormitory supervisor Arthur Plint and two non-consecutive convictions for supervisor Paul Leroux.

The federal government estimates that a total of 150,000 aboriginal children went through the school system, according to the TRC report. More than 3,200 children are documented by the report to have died in the schools, but TRC chair Justice Murray Sinclair stated that the true number of deaths may be closer to 6,000.

If the 6,000 figure is accurate, the odds of a child dying in a residential school were higher that the odds of Canadians dying while serving in World War II, notes the CBC.

In 37 separate instances, students attempted to burn down their schools to escape the abuse, with two of those attempts resulting in the deaths of staff and students, according to the report. Other students died from exposure while attempting to run away.

Starting in 1969, Canada's government began a long and drawn-out process of closing down the schools, the report states, taking control from the churches and changing policies. The last federally supported schools shuttered in the late 1990s, as the decade saw more survivors speaking out and aboriginal rights groups demanding reparation. The government issued a formal apology to former students in 2008. 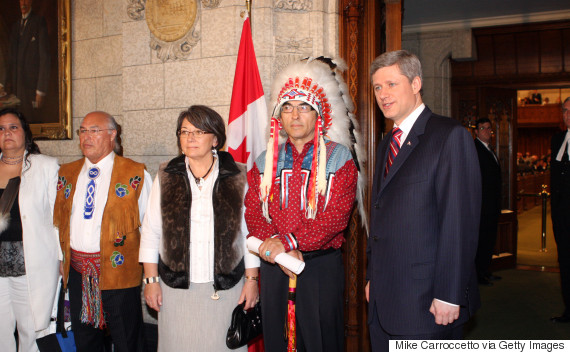 In addition to documenting the abuse suffered in the schools, the long-awaited TRC report issues 94 proposals for achieving reconciliation. These range from changes in public health policy to language laws that protect indigenous languages. The report also suggests that memorial monuments be built in the capital of every province and territory, and that Canada adopt the United Nations Declaration on the Rights of Indigenous Peoples.

It also calls on the pope to issue a formal apology for the Catholic Church's role in the abuse.

The Anglican and Presbyterian churches have issued apologies in previous years, and Pope Benedict expressed sorrow and sympathy for the abuses in 2009, but did not apologize. Canada's Archbishop Gagnon balked at calls for an apology on Wednesday, saying "that ground has been covered already."

The Canadian government hasn't committed to implementing any of the proposals, and it has previously opposed signing the UN declaration out of concerns that this would give aboriginal groups the ability to veto national laws in their territories.

Both of Canada's largest opposition groups have said that they would implement all 94 proposals if they come to power. The next election is to be held in October.

The full summary report can be read here.