Read the rest of our coverage of COP21 in our special report, A Climate of Hope.

At the start of the climate change conference (COP21) here in Paris, Canada's new Prime Minister, Justin Trudeau, had a message that was both a call to action and a political jab.

"Canada is back, my good friends," he told a room of global leaders to applause. "We're here to help." 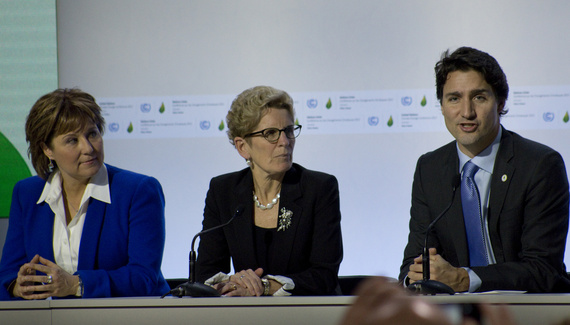 Canada is the world's ninth most carbon emitting nation, releasing 552.56 million metric tons of carbon into the atmosphere in 2011, according to the Union of Concerned Scientists. Trudeau's statement marks a shift in Canada's engagement in addressing climate change, an issue many agree was not a priority for Stephen Harper, Canada's conservative former prime minister.

"My message is simple, Canada can do more to address the global problem that climate change represents," Trudeau told leaders in French. "Our government is making climate change a top priority," he added, switching to English. The message that leaders including Trudeau, new Australian Prime Minister Malcolm Turnbull, California Governor Jerry Brown and Indian Prime Minister Narendra Modi have all sent at COP21 is that political leadership must set the tone on climate for business to follow.

As part of his commitments, Trudeau said he would provide support to developing countries and introduce carbon pricing countrywide. He also expressed an interest in working with indigenous communities and vulnerable groups.

"The change in leadership in Canada can certainly be seen as a new opportunity for addressing climate change," Dave Steinbach, a researcher for the Climate Change Group at the International Institute for Environment and Development, said in an email. "For a decade under Stephen Harper, Canada has actively resisted efforts to reach a global climate change deal. In just two months, Canada's climate discourse has been turned around."

In addition to pledging $2.65 billion Canadian dollars ($1.98 billion US) to the Green Climate Fund, Trudeau has worked with politicians from each of the Canadian provinces to develop new climate mitigation targets.

But environmentalists have expressed concerns that despite some major improvements on climate policy in Canada, Trudeau will continue to develop the Keystone XL pipeline. The project, which was blocked by United States President Barack Obama because of the impact it would have on exacerbating climate change, has been controversial and drawn a criticism from environmentalists around the world.

Still, for many Canadians attending the climate conference, the new government is a hopeful sign that solutions to address climate change will be taken more seriously.

"You can feel the shift in the optimism and the inspirational speeches that the leaders are delivering," said Dominique Souris, from the University of Waterloo and member of the Youth Arctic Coalition.

Souris said the Canadian delegation has been much more engaged with other delegations and with youth groups at the conference this year. The delegation organized meet-and-greets with key political figures and leaders of Canada's provinces have taken part in the negotiations.

At the Conference of Parties 19 in Warsaw in 2013, Canadian delegates read their statements from a piece of paper and made no attempt to meet with youth delegations, Souris said.

"I think it's a good start," she added. "I think it's not the only solution, but especially when we're talking about national and nation-to-nation coordination of efforts there needs to be top leadership."

Canada is one of two leading global economies with new political leaders just months before COP21.

Though Turnbull and Abbott both come from the same political party, their perceptions of climate change are very different. Abbott emerged as one of the most powerful climate skeptics and under his leadership, Australia developed plans to expand coal mining and fought carbon pricing. The country was also found to have the third worst climate policy in the world, coming just before Saudi Arabia and Kazakhstan.

Turnbull denounced Abbott's stance on climate in 2009, calling it "bullsh*t," but since taking over as prime minister, his administration approved the development of what would be one of the biggest coal mines in the world.

Australia's role within COP21 and international climate negotiations, however, has been more substantive, said Matt McDonald, Professor of International Relations at the University of Queensland.

Australia is now co-chair of the Green Climate Fund, a fund to assist developing countries in adapting to and mitigating climate change which was criticized by Abbott. The country has also sent key ministers to the negotiations.

"While we've seen a shift in style and in climate diplomacy, we haven't seen much change in the substance of domestic climate policy," he added. "The absence of substantive changes to targets and policy illustrates that there are often constraints to major policy shifts."

Australian and Canadian experts agree that politicians can play a part in contributing to solutions to climate change, but leadership changes are just the beginning.

"For the long-term success of political climate action, it needs to not be subject to the whim of leadership changes," said Sarah Brown, Associate Director of the Interdisciplinary Centre on Climate Change at the University of Waterloo. "What's more important is systematic, built-in institutional structure that can withstand changes in leadership."

This post is part of a series produced by The Huffington Post and The GroundTruth Project, in conjunction with the U.N.'s 21st Conference of the Parties (COP21) in Paris (Nov. 30-Dec. 11), aka the 2015 climate-change conference. GroundTruth will have six reporting fellows in Paris, each of whom will be filing solutions-oriented climate-change stories for The Huffington Post, which will be a part of HuffPost's What's Working editorial initiative. To view the entire series, visit here.