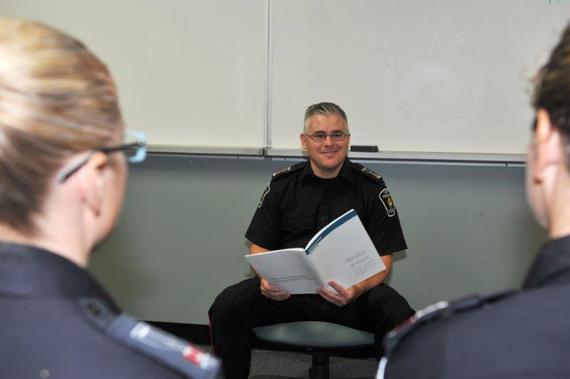 Officer Jon Carson lights up when he speaks about teaching mindfulness techniques to officers with the York Regional Police.

"My goal for policing is to say, here's a tool for you. You have all these other things on your belt. You have a gun, handcuffs, pepper spray, and I'm not advocating taking any of that away. All I'm telling you is, if you were actually to take a step back and take a breath prior to any interaction you're dealing with, it may save a life. It may save your life. It may save that individual's life. It may save someone else's life down the road."

Carson knows a few things about life and death. As someone who has navigated the challenges of Post Traumatic Stress Disorder (PTSD) and lectures regularly on the topic, he's experienced first-hand the hazards of routine police work, as well as the impact both professionally and personally.

Last year, Carson's wife, Kim (also a police officer) gave him a copy of Mindful Magazine for his birthday. On its cover sat a cross-legged Lieutenant Richard Goerling, Oregon's self-described "cultural change warrior" who made U.S. headlines for bringing mindfulness into law enforcement. Carson got the subtle hint, but it took an accident and a concussion to get his full attention: his neurologist recommended one hour of meditation per day to heal the wound. 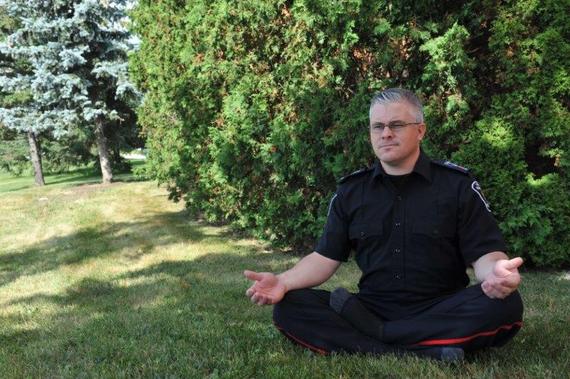 He spent six months as a "closet meditator," not wanting others to think he was "eating granola or sitting out in the wilderness meditating," but positive changes made him a believer. He soon approached his organization about teaching mindfulness to other officers and organized to meet with Lt. Goerling at a conference in Seattle. A sergeant, concerned about how mindfulness would be delivered within the policing culture, joined him on the trip.

"After two days of rocket scientists, scholars and people talking about implicit bias and other things in the law enforcement world, we got on the plane, and he said, 'I think you have something.'"

That something led the York Regional Police to partner with Mindfulness Without Borders (MWB), an organization based in Toronto, Canada, that teaches mindfulness-based social and emotional learning programs all over the world. (They were also listed in HuffPost's THE NEXT 10.) The department was attracted to MWB, he says, because of the simple language and straight-forward techniques. Among the things they learned: a daily 3-minute breathing practice to reduce stress and anxiety, strategies to notice emotional triggers and a repertoire of skills to break from habitual patterns, reduce reactivity and build resilience.

"I could take it into a room filled with police officers who are stuck in their own space some days and break it down and say, I'm not throwing any eastern or western philosophies out here. It's the simple act of being present in your daily life."

Being present is the core focus of the 8-week curriculum they brought to their first group of police recruits in April of this year, along with a handful of senior management-- 32 people in all. Their main goals are to increase resiliency, to regulate emotions and to reduce overall stress. The organization hopes to train every class of recruits before they hit the streets as uniformed officers and by January 2016, to make the training available to all 2,600 members of the organization. 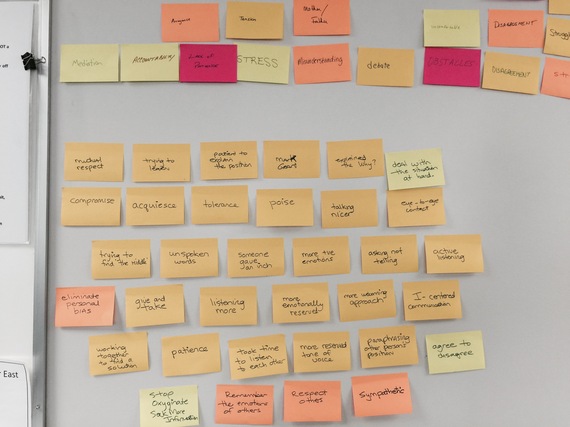 While Canada trails the U.S. in the number of officer-involved shootings and suicides, Carson says they've had their fair share of high-profile cases. In these last years, the numbers of first responders and military personnel committing suicide continues to rise. To their knowledge, the York Regional Police is the only law enforcement group in Canada experimenting with mindfulness, which is admittedly hard to measure in terms of efficacy. Still, he insists these skills can be critically important in every day enforcement situations.

"If I have a moment where I'm dealing with a highly agitated individual or who appears to be in crisis and is standing in the room with knife... the simple act of taking a step back, taking a deep breath, listening to what the person is going to say, I hate using the word successful, but we'll come to a more peaceful resolution as opposed to rushing in with our guns out and yelling and screaming commands."

Carson feels a bit like a "salmon swimming upstream", and says mindfulness will continue to be a hard sell because the policing world is stuck in old ways and slow to adopt change. He's encountered some naysayers, but identifies their aversion to meditation as the stigma that arises when trying something so new and different.

He also doesn't plan on stopping. In addition to doing speaking gigs and creating a mindfulcop.com site to get the word out, he's even taught his kids to meditate. Carson recommends anyone who is open to it-- especially those interfacing with the public-- should try an app like HeadSpace or take a mindfulness course just to see how it improves their life.

"A lot of the things we focus on in the policing world have been fitness and wellness. Those two things are post trauma. This is actually something we can give our people, front-end, to deal with the caustic environment that is policing and emergency services and military, to give them the resiliency so they can build themselves up, so they can actually take care of themselves. And there's no doubt in my mind, if you give them that ability, you'll see a reduction in sick time, you'll see more engaged people at work, you'll see people happier at work. You'll see a reduction in anxiety, stress, all the things that come along with putting this great uniform on."