There's more bad financial news for Vancouver-based Northern Dynasty Minerals, the last remaining company in the now-depleted Pebble Partnership - the company behind the reckless scheme to build a massive open pit mine in the heart of the world's greatest wild salmon fishery, the Bristol Bay fishery of southwest Alaska.

According to Northern Dynasty's own Consolidated Financial Statements filed last month (as well as Deloitte LLP's audit and the company's Management's Discussion and Analysis for the year ending December 31, 2015), there is now "material uncertainty that casts substantial doubt about the company's ability to continue as a going concern."

This conclusion follows inexorably from debt and deficit numbers like the following:

And if you're wondering where the company's money is going, just ask the lawyers:

In the coming year, look for these kinds of expenses to multiply as the company pursues other frivolous legal claims, including apparently for financial reimbursement from U.S. taxpayers. In January, the company contacted the U.S. State Department threatening a claim for damages under the North American Free Trade Agreement ("NAFTA") Chapter 11, alleging that EPA's "decision" on the Pebble Mine "was taken in a grossly abusive, arbitrary and deliberately opaque manner, in breach of standards of due process and good administrative procedure, in violation of U.S. law, and in breach of Northern Dynasty's legitimate expectation . . . ." 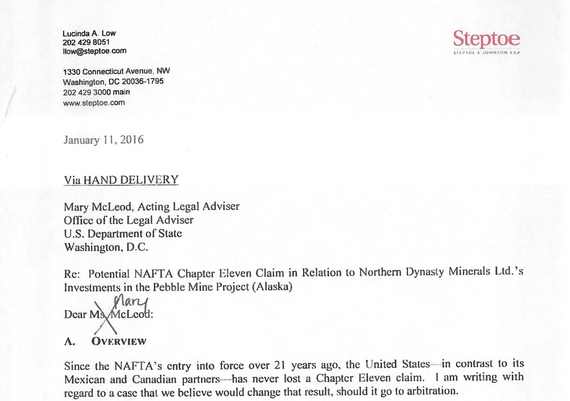 In other words, Northern Dynasty has now notified the State Department that it is considering a request for arbitration under NAFTA based on the same old claims that is has unsuccessfully pursued in U.S. courts - asking this time not for injunctive relief but for a financial bail-out! Stay tuned . . . .

While the Pebble Mine scheme may appear all but dead, Northern Dynasty's outside lawyers are alive, kicking, and doing very well indeed. As long as there is money to fund their pursuit of frivolous claims, look for this to continue - notwithstanding "substantial doubt" about the company's "ability to continue as a going concern."

It's time to stop the Pebble Mine. Take action now.