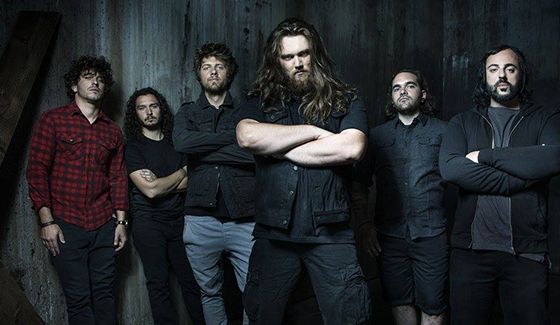 They are new faces into the metal scene with hopes of making big waves. The Canadian progressive metal band Oni, donning influences from across the board of music, are looking to bring a unique approach to heavy music. With members originally based out of the Windsor and London areas of Ontario, Canada, Oni is an amalgamation of talent from their home.

Oni is set to release their debut album in the near future and is currently on the road with Devil You Know. I was able to chat with Oni lead singer Jake Oni about what's been going on with this band since its inception a few years ago.

How and why did this band form?

It's one of those things where a lot of the guys have played in local bands together and in different bands. This band is a combination of people from a lot of different bands around the Windsor area that just wanted to keep going and make something new. Two of the guys live in L.A. and I went out there and started making music with them. It kind of spiraled from there and we got really serious about it. Just recorded an album with Josh Wilbur. It's been really cool working with these guys.

What can we expect from the debut album?

What are some of the band's influences?

It's all over the place. I'm a metal head and I was never really into the progressive stuff as much as the other guys in my band are. I like Slipknot a lot. But you know, our band likes everything. All different stuff. I big combination of stuff. We try to make music you never heard before. That's what our goal is.

Normally, someone writes the songs and throws it to the dogs and everyone else fuckin' tears it up. Try to make it something that we all like and everyone adds parts to it that they like. Me and bass player, we write all the lyrics. I do all the vocals with the help of Josh. It's been really fun.

How much material do you go through before you finalize the album?

A lot! Probably like another album worth of demo, but they probably wont come out because their bad (laughs).

Right now, you're touring with Devil You Know. How that's been?

Its been awesome. Francesco [Artusato] did a guest solo on our record, so I know the guys pretty well. He's a great dude. Everyone's been really cool on this tour, really nice to us. Just good people, really nice guys.

How would you describe an Oni live show?

When you're on stage, what goes through your head?

Fuck shit up! Head bang a lot. I scream. I try to stare kids down and get them all riled up. It's a very primal thing, to draw energy and whatever I'm feeling that day, or I'll just think about something that pisses me off and try to use it in a positive way to share my energy with the crowd. Let them feed off that, which allows me to feed back off their energy. If the crowds going nuts, that's when we go the most nuts. That's when everyone enjoys the show no matter what happens. Those are the best shows.

What do you hope of the legacy of this band will be?

Oni is currently on tour with Devil You Know and will be playing at The Ritz Detroit (24300 Hoover Rd, Warren, MI) on Wednesday, May 4th. For more information on Oni, visit theoniband.com.