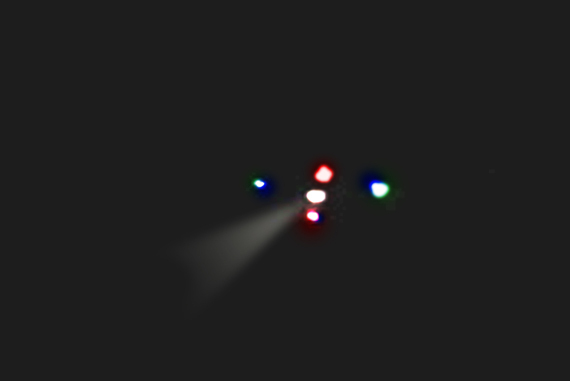 Two Canadian witnesses traveling east along Highway 16 near Marlobo, Alberta, reported stopping and photographing an unknown object hovering above the tree tops about 400 feet away, according to April 29, 2014, testimony in Case 55866 from the Mutual UFO Network (MUFON) witness reporting database.

The two witnesses were returning home from work in Hinton and heading toward Edson when the incident occurred about 4 kilometers east of Marlobo about 1:45 a.m. on April 25, 2014.

"While driving I noticed on the north side of the highway green and red lights low within the tree line," the reporting witness stated. "It was 1:45 a.m. and it was very dark. The trees are bare. No leaves as this is early spring here so I thought it was a low flying airplane as they carry the green and red lights. I thought I'd seen an airplane flying low on the horizon through the trees."

But they approached closer to the object.

"As I was getting closer I noticed these lights were not moving and they appeared bigger. It was nothing of significance to us as we thought it was perhaps some sort of tower. Finally we passed the small grove of trees and were able to have the direct visual on these lights. We saw red, green, blue-purple light blinking, sort of pulsating around quite fast. There was also a light at the bottom like a dome light rotating a beam of white-yellow light illuminating the ground and trees."

They parked their vehicle along the shoulder of the road to get a better look at the object.

"We got out of the truck to snap some photos with our cell phones. The truck was put on park, idling with radio playing - local Hinton music radio station. We were in front of that thing within 400 feet distance as it was just above the trees across the highway right in front of us. It was very dark and the lights it was projecting were very bright, sort of blinding us."

The two tried to take photos.

"We tried to catch this object on the camera but you could not see it in the LCD display. I snapped two pictures without flash to see if I could capture something. As I was looking through the pictures my friend yelled that the object moved to the right abruptly."

They tried to capture video too.

"I set up my cell phone on video record mode and recorded the event. I finally could see the object if I zoomed on it all the way - although this object was 300-400 feet in front of us, fairly large, maybe six cars wide, I could hardly see it on my cell phone cam. I recorded about a minute of video."

The two began to become afraid of their encounter.

"We honestly got a bit freaked out, but I wanted to see it move, so we stayed a bit longer and I noticed that the object drifted slowly to the left."

The witnesses began to wonder if the lights on the object were an attempt to communicate to them.

"I then thought that maybe that thing is projecting the lights - maybe I should use cell cam flash to signal a couple flashes as a form of communication. I got my phone again. I snapped once and nothing happened, but when I sent the next flash, that thing suddenly made a high pitch, two tones, sound lasting for maybe seven seconds. We got afraid a bit, so we jumped back in the truck and decided it was time to go."

Back inside their vehicle, they realized the object was somehow interfering with their radio.

"What we noticed inside the cab was a static noise of the radio. Where we pulled over to investigate the object, we were listening to a Hinton music station. Now there was nothing but static noise. Upon that we realized we had just seen a UFO which interacted with the truck's radio. We took off rather fast, leaving that thing behind."

As they moved away from the scene, they were relieved that the object was not following them.

"It just sat there over the trees. We were quite disturbed. It was mine and my co-workers first time witnessing a UFO event, especially that close. We talked about that all the way to Edmonton."

The two pulled over in Edmonton to review the images and video they had taken of the event. The witness included one video clip and four images with the MUFON report: Video, Image 1, Image 2, Image 3 and Image 4. Image 4 is a colorized sketch of the object.

"To our surprise we hardly had any photos on the phones. I shot four pictures in total and made about a minute long video. All I have on my phone is one picture and eight seconds of video. My friend shot over six photos. His phone did not record a single photo. This by far was the weirdest and most interesting experience I have ever had."