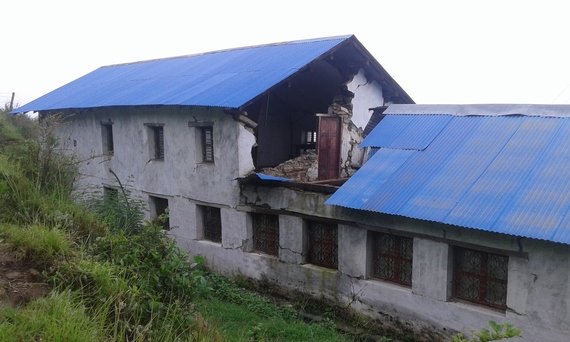 Possible is focusing resources on repairing this damaged clinic in the Dolakha District of Nepal.

This new set of goals mirrors the MDG's in many ways. But they also have some new additions and approaches, like the 10th goal: "Reduce Inequality Within and Among Countries."

Part of this 10th goal includes working to eliminate debt policies that affect the poor and benefit the rich--a goal that is particularly relevant after the national debt crises in Greece and Puerto Rico dominated headlines this summer.

As international leaders gather at the General Assembly of the United Nations annual meeting this week, it's crucial that the issue of debt is raised so developing nations and poor nations have the ability to grow their economies and achieve sustainable prosperity.

This is critical for countries like Nepal, whose debt crisis hasn't been in the headlines. Nepal owes $3.8 billion in the shadows of the major earthquakes, which have killed over 8,000 people and left an estimated 2.8 million people in need of humanitarian assistance.

Earlier this summer, representatives of global governments convened in Kathmandu to discuss support for rebuilding Nepal, committing $3 billion in grants and loans. Since over 50% of those commitments may very well end up as loans, it is important to highlight the deep problem of debt in Nepal's long-term recovery. The majority of Nepal's $3.8 billion debt is owed to the World Bank and to the Asian Development Bank. In a country whose GDP stands at $20 billion and for whom the earthquakes of April and May will likely enact over $9 billion in costs, this debt is substantial.

This problem extends well beyond Nepal's borders. For every dollar provided in development assistance from wealthy countries to poor ones, $13 is spent on debt flowing the opposite direction. Developing countries shoulder over $4 trillion worth of debt. Much of this debt is the fault of prior autocratic or inept governments--in Nepal, a feudal system under the Monarchy that was dismantled following the civil conflict. The Nepali people decided in 2006 to start fresh with a democratic system. Yet this fresh start came with a long burden of debt.

Regardless of past leadership, some will argue that Nepal must pay back its debt to demonstrate fiscal responsibility and increase investor confidence. This stance ignores the responsibility of creditors for making bad loans and it assumes a false relationship between being relieved of the debts of prior autocratic rulers and the future of governance in the new democracy. Emphasis on the need to hold Nepal accountable ignores the fundamental lack of accountability shouldered by wealthier creditors.

Much of Nepal's governance challenges lie in a severe shortage of capital to pay for essential public services. Relieving improperly accrued debt will go further towards achieving the capital required than providing new grants and loans. Furthermore, providing short-term aid while not addressing long-term debt leads to dependency and undermines the autonomy and economic self-determination that Nepal needs to recover and rebuild.

The path, then, is clear: cancellation of the $3.8 billion in debt. There is a precedent for action here, including the G8's Multilateral Debt Relief Initiative and the Heavily Indebted Poor Countries Initiative of the International Monetary Fund and World Bank. The International Monetary Fund has a particular fund designated for debt cancellation to disaster-affected poor countries, and this mechanism is likely to benefit Nepal. Unfortunately, the bulk of debt is housed within the World Bank and the Asian Development Bank, and neither have indicated that debt cancellation is on the horizon.

The reciprocal commitment on the part of the Nepali government and its people must be to commit to improved standards of governance. To be sure, poor governance deserves much of the blame for the over 8,700 people who perished, in particular from limited regulation and enforcement of building codes. Hobbled by two centuries of monarchy that shaped its bureaucratic structures, the new democracy has not had time to catch up to the needs of its people.

To help foster that new path towards better governance and self-reliance, the best action the international community can take is to cancel Nepal's debt. Nepal needs substantial foreign direct investment to build infrastructure and businesses. At the same time, the government needs to invest heavily in public infrastructure and services. Continuing to collect on debt acquired unfairly does not help on either front.

Cancelling the debt is the best way for global governments to build off the remarkable generosity and concern that their own citizens have shown over the last two months towards Nepal. Debt cancellation will set Nepal on the path to rebuilding a prosperous, healthy, autonomous country.