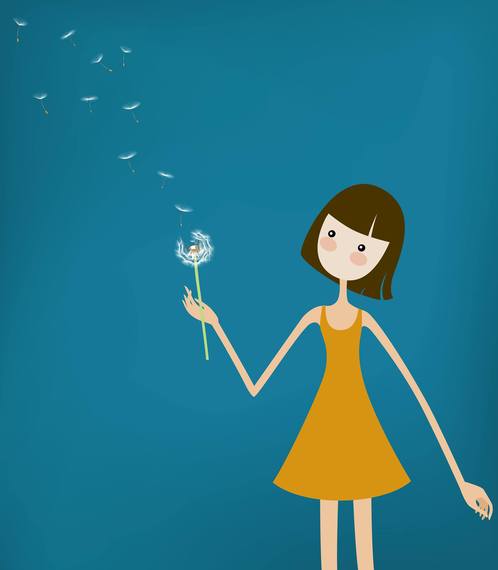 My 14-year-old daughter has lived with cancer her entire adolescence. Diagnosed at 11, she's weathered the storm of puberty and her changing body under the oppression of this disease. This past Friday, she had a very bad scan.

She learned that her cancer is growing faster than ever before with new tumors appearing very quickly in her abdomen, pelvis, bowel and lungs.

My daughter anticipated the news even before we got the results. She said, "It's going to be bad, Mom." I don't know if this was some kind of sixth sense she's developed from the many years of being acutely aware of her own body or if she's just able to face the reality of her disease far more honestly than I am. Either way it breaks my heart.

When I tried to persuade her not think the worst, she shook her head and sat down to hear the results which were explained clearly and compassionately by her doctor. Then, after years of letting my husband and I do all the talking, she asked the first question.

The pediatric oncologist looked at my child and explained a few ways that people can die from uncontrolled metastatic cancer.

He told her they could give her medication to keep her as comfortable as possible. Then he suggested we reach out to the palliative care team. It was the moment I'd been dreading since the first day of her diagnosis. The moment when all I could do was sit in the exam room and cry.

There are stages of hope just like there are stages of grief, and I take some small comfort in having control over the language of my family's anguish - just a little bit. Here are some of the ways the meaning of hope has changed for my family.

You'll beat this. This is the "get to higher ground" stage. It sweeps you up and breathes new air into your lungs after the initial shock and horror of a cancer diagnosis has knocked the wind out of them. It's the rallying cry of those who have yet to understand the full limitations of modern medicine and what "not enough funding for research" truly means. There are short straws and then there are minuscule straws and my daughter drew the tiniest of them, having the misfortune of being diagnosed with a type of tumor that didn't used to be considered malignant (though now they are finding it often is) in the handful of cases that exist in the medical literature. They said her liver transplant would cure her because it would remove her tumor and it would never come back, it would never spread. She would beat this - and so we had sadness and pain, but we also had unwavering hope.

You're incredibly strong. This is stage two - the "what doesn't kill you makes you stronger" stage. We entered this stage via an ice cold wake-up call of an MRI scan that revealed new tumors near her transplanted liver and metastatic disease in both her lungs. The language of hope was nearly the same, though our faith in modern medicine wasn't quite as unshakeable. After more surgery (the treatment of choice for her type of cancer) and radiation, modern medicine once again came through for us. Genomic sequencing of her tumor uncovered a miracle drug that targeted one of the genes involved in her cancer. It slowed everything to a crawl (without hair loss).

I don't know how you do it. This is stage three, aka, the "long haul." After another year of relative stability, the miracle drug stopped working and cancer progression sped up. It was subtle at first. Some of her lung tumors began to grow again after being stable for months. But there was a foreshadowing of what was to come when a large new tumor blossomed in her pelvis after only six weeks. It was removed via surgery, of course, and she started 8th grade four days later as if nothing had happened. We still had hope - real hope that she would beat cancer or be able to live with it for years until a true miracle was discovered. We began calling it a chronic disease and clinging to stage one - she was going to beat this.

Have courage! This is stage four, the "Be positive" stage. After a year of stability, she turned 14, graduated from middle school and began high school on a new oral chemo drug that made her tired and a bit too thin. Then she stood up the day after Thanksgiving and screamed in pain, clutching her stomach. What followed was a trip to the E.R., another CT scan, and the devastating news that her pelvis which had been completely tumor free just six weeks earlier, was literally full of new tumors. Hope faltered. People told us to stay strong, stay positive. One of her surgeons admitted that he felt surgery at this point was futile - it would cause potential complications without any clear benefit. But we forged ahead with yet another surgery because the alternative - stopping treatment - was unthinkable. All of the tumors in her abdomen were successfully removed. She recovered from that surgery in January and had three weeks of radiation to two persistent lung tumors. By March, she'd begun to gain weight again and fall into the rhythm of daily life.

I don't have a label for the final stage of hope because it's not any kind of hope I've ever experienced before. It lives in the shadow of despair. Someone I know who lost her teenage son to cancer said this about hope versus despair during the last phase of her son's illness. "After a few weeks, it was excruciating to hold both of those emotions together." The tumors are back again, the cancer is gaining traction in her body and hope seems like a fading memory, just like life before cancer.

My child is such a part of me that the thought of losing her makes me feel like I'm unraveling. Every day of my life since she was born is wrapped up in being a mother to her and her sister. Now I find myself hoping for things that were previously unthinkable. I hope that she won't suffer. I hope that the world knows about her. I hope that I won't disintegrate from the inside out as I try to remain strong.

More:
Parentschildhood cancerParenting pediatric cancer
Newsletter Sign Up
Raise the kind of person you'd like to know
Subscribe to our parenting newsletter.
Successfully Subscribed!
Realness delivered to your inbox