Get ready to practice your pronunciation, because the name on everybody's lips is about to be Victoria's Secret Angel Candice Swanepoel. The model has officially transcended the lingerie world, splashing into the mainstream with a cover for Elle UK.

Swanepoel goes high fashion for the December issue of the mag, modeling a metallic pink leather jacket by Saint Laurent, smokey eye makeup and bleached-out hair. The styling is certainly different than we've become accustomed to seeing the South African beauty sport -- namely, she's wearing actual clothes. (Plus, we suspect some over-zealous Photoshopping is to blame for why we didn't quite recognize her at first.)

This has been a monumental year for Swanepoel, as she's landed the coveted role of modeling the Fantasy Bra at the 2013 Victoria's Secret Fashion Show, not to mention she ranked 9th on Forbes' "World's Highest Paid Models" list. Throw in a major fashion glossy cover, and we'd say she's being positioned as the next Miranda Kerr, a former Angel who has become a global celebrity by expanding her repertoire past undies, bikinis and that iconic Fantasy Bra.

After all, Kerr has bowed out of the annual Victoria's Secret extravaganza this year, leaving Swanepoel to steal the show. Perhaps this Elle UK cover means Kerr is passing the torch -- er, bejeweled brassiere -- to Swanepoel once and for all. 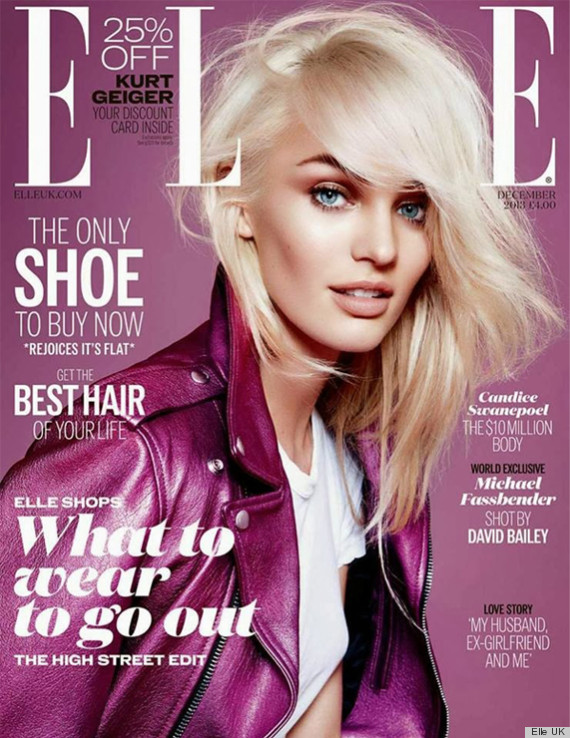 See the other women who came before Candice: