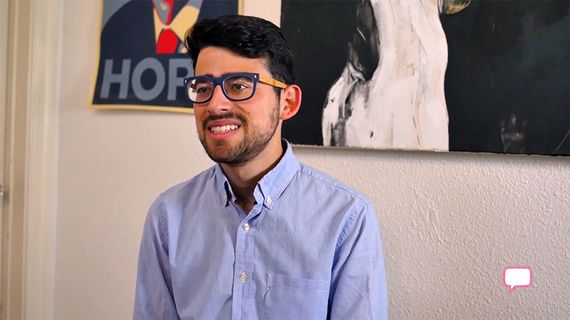 Huey Rey Fischer is running for State Representative in Texas. Before Huey Rey launched his campaign, he was meeting with mentors and advisers to talk about strategy. Huey Rey recalls:

And as we were having these discussions, Glen Maxey who was the first openly gay state representative in Texas -- who had mentored me the past few years on Texas politics and community organizing -- he asked me point blank in front of a room full of my friends and other mentors, "How gay are you?"

Huey Rey doesn't just identify as queer, he's also the son of a formerly undocumented immigrant. Throughout the campaign, Huey Rey fought against the stigma of the word "queer" and also realized that just because someone identifies as LGBTQ doesn't mean they're progressive:

I've noticed that when I'm at LGBTQ functions, and I say, "Oh, I'm the son of an immigrant mom from Mexico," and some will joke, "Was she illegal?"

I had to sort of step back for a second and comprehend that just because people are LGBTQ, doesn't mean that they're fully progressive or fully up to date on all issues affecting all communities, such as the immigrant community or other groups. I had to respond, "Well, yes, I was the son of an undocumented immigrant, but she has her papers now and is a U.S. citizen."

Running as a queer candidate and the son of an undocumented immigrant has taught Huey Rey how much people care about his identity:

When I reflect back on that night when I was asked, "How gay are you going to be in this campaign? How gay are you?" it really sunk in how much my identity matters to other folks, and how I need to play a fine line of letting them see who I am, while also letting them understand what I'm going to do for them. It's been eye opening.