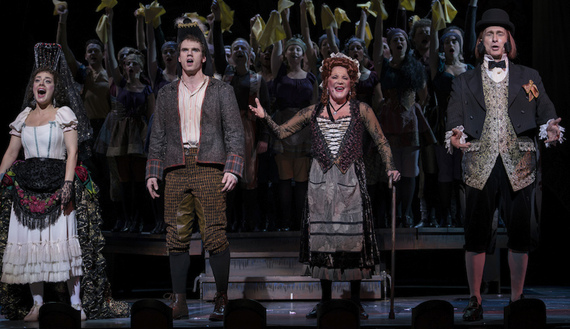 I'm what you might call a Candide virgin. Or close, whatever that means (we've gone to third base but not all the way? I know what it's about but don't own the cast album?).

I've never read Voltaire's book. Don't know Leonard Bernstein's music. Saw the 1974 Broadway version, which I promptly wiped cleanly from my brain and never thought of again. Until last Friday evening, when I found myself seated in the Rose Theater.

In their quest for renaissance, City Opera likes to time travel. Last year at this time, they brought us Tosca, the work that launched their inaugural season in 1944. And this January, they're pulling from not quite so long ago, with a 10-performance run of their 1982 production of Candide, helmed once again by the inimitable Harold Prince.

I may have started a virgin, but now I'm a (mixed metaphor here) true believer. Such glorious music! Such a ridiculous, silly plot! Such a mixed bag of performances! Such clumsy gags and dated caricatures!

But did I mention that glorious music?

The production has its ups and downs. From the opening moments, when our narrator/Voltaire/Pangloss, played with an almost desperate flourish by Broadway vet Gregg Edelman, loses first his hat (adroitly grabbed by a quick-thinking member of the chorus) and then his wig (which he handled with a quick joke), it seemed like the company could have used a few more days of rehearsal. But the Rose is a small stage, and the number of props and costume changes involved in such a complicated production made me wonder if they had the backstage equivalent of a hundred clown cars. Where did they put it all? How do they keep it organized? The stage seemed overwhelmingly crowded with cast and the occasional crew, all working together to push and pull and string up and haul down. It was nearly exhausting to watch.

But when you have a story that goes from Westphalia to Constantinople by way of Montevideo with a dozen other stops in between, and includes earthquake, inquisition, pirates, war, slaughter, ravishment, and even a dash of cannibalism, it's hard not to feel a bit worn out at times. And speaking of worn, the jokes are, at best, hokey, and the stereotypes dated, even though talented old hands like Chip Zien and Brooks Ashmanskas do their best with a multitude of silly characters. 2017 is not 1982, which is not 1956, when the show premiered.

But, remind me, did I mention that music?

Jay Armstrong Johnson does appealing work in the title role. He is earnest and endearing, making his way through the old and new worlds as well as through the audience (twice!), which was definitely harder. The real beauty of the evening was Meghan Picerno, clear of voice and crisp of diction, who managed the challenging "Glitter and be Gay" with aplomb.

But both Candide and Cunegonde, as well as Cunegonde's brother Maximilian (Keith Phares) and serving girl Paquette (Jessica Tyler Wright) are not people, they are caricatures, which is perhaps the best they can be in this, the most picaresque and plot-laden of stories.

At least that was what I believed until Linda Lavin took the stage to show us how it's done. She's missing a name (the Old Lady is the only title she's given) and half her buttock (remember that cannibalism I mentioned?), but Lavin has more acting punch in her pinkie than the rest of the cast put together. Her nameless, partially buttock-less Old Lady is a character, not a cartoon, and her big comic tango, as she tries to seduce a passel of exhausted old men is a real pleasure.

Although it isn't merited by the absurd and ignorable story, the finale actually brought a tear to my eye. As the enormous cast stands downstage and exhorts us to "Make Our Garden Grow," the orchestra drops out, and all those voices, those beautiful voices, lift up to the roof of the little Rose, and our hearts lift right along with them.

Dance as Social Commentary at the Joyce