On Wednesday night I did the worst thing a person could do on Facebook. I did something that I have made fun of people for doing. Something I have read countless stories urging people not to do.

I invited most of my Facebook friends to play "Candy Crush Soda Saga." I am my own worst nightmare.

I am a tech writer and former editor of HuffPost Tech. I am an adult, college-educated, sophisticated woman. I should know better. Here's what happened:

I've been playing "Candy Crush" and the spinoff, "Candy Crush Soda Saga," for a few years now. I've generally been able to keep it a secret. I'm not embarrassed about it, per se, but I'm not proud of it either. I'm on level 437 on "Candy Crush" and level 297 on "Candy Crush Soda Saga." I'm great at these games and I play them often. We all have our guilty pleasures, okay? Every night, before I go to sleep, I lie in bed listening to a comedy podcast and playing "Candy Crush." Side note: Yes, I know it's bad to stare at screens before bed. Do as I say, not as I do.

On Wednesday night I was hanging out in my apartment, watching TV and candy crushing when the unimaginable happened. I pressed the wrong thing and sent a request to everyone I know on Facebook.

This is what my friends saw on their Facebook feeds last night:

At the time, I didn't realize it had happened, but before I knew it, the texts started pouring in. Not just from friends and family, but from coworkers. Here's a text I got from HuffPost Business editor Alex Kaufman last night: 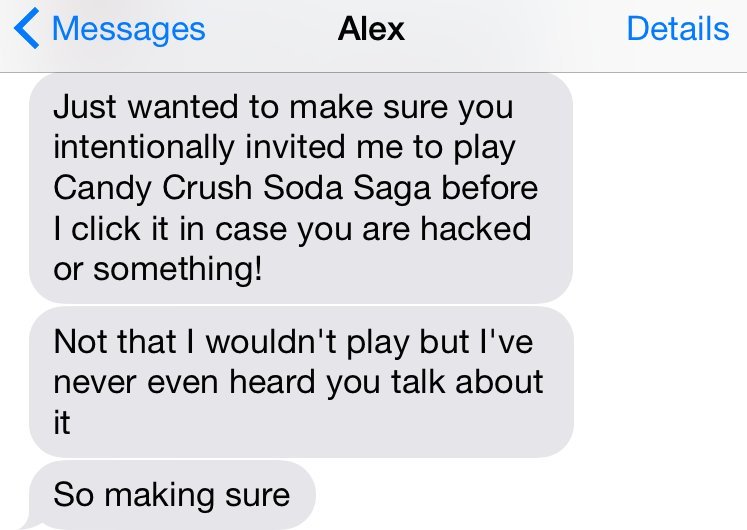 Nope. I wasn't hacked. Though at this point I feel like being hacked would have been less embarrassing than this.

I'm here to say that this could happen to anyone. Seriously.

It's an easy mistake to make. In "Candy Crush" you have the option to send your friends extra lives. Some of my friends and coworkers (don't worry, I won't out you as a candy crusher) send each other lives all the time. There is also an option within the game to invite all of your Facebook friends who aren't playing the game to play the game.

The problem is: Both of these pages look the same. It is VERY easy to accidentally press the wrong button.

Below, you'll see what the page that allows you to ask-every-human-you've-ever-interacted-with-to-play-a-dumb-iPhone-game on the left and a page that lets you ask-your-friends-who-already-play-this-dumb-iPhone-game-for-extra-lives on the right. THEY LOOK THE SAME! 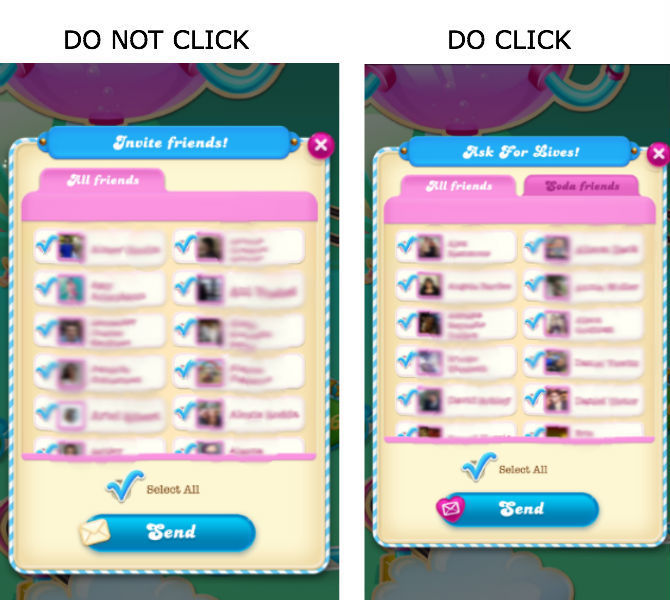 This is to say that it's an easy mistake to make, and maybe you shouldn't judge people who send you game requests on Facebook. They're just trying their best.

On an unrelated note, I'll be hiding in my room for the rest of the month if you need me.