Birmingham, Alabama: It's an egg-citing place.

Cops rounded up the bomb squad after someone reported a "suspicious package" across the street from Birmingham Police headquarters Tuesday.

The package in question was an oversized egg with a face painted on it. A tipster discovered the egg around 1:30 p.m. The bomb squad inspected the egg with a robot and determined it contained candy.

Alabama Media Group, which runs AL.com, has offices across the street from the police department. The egg was left on their doorstep. Management evacuated the building as a precaution while the bomb squad assessed the situation and inspected the egg. 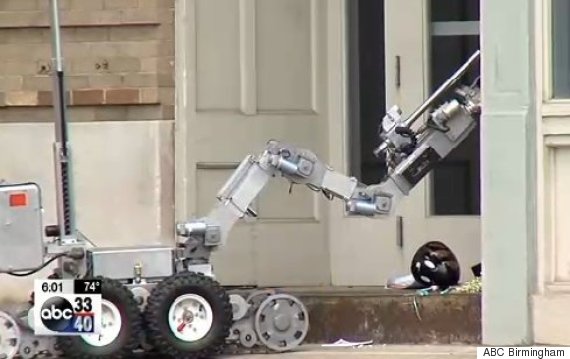 Carol Robinson, a public safety reporter for AL.com, shared a photo of the egg while live-tweeting a small protest by Black Lives Matter, which was taking place outside police headquarters at the time.

And then there's this suspicious egg in our doorstep pic.twitter.com/iFfzqrAYJX

Three protesters were arrested in the demonstration. It's unclear if the novelty egg was connected to the protest. Birmingham Police did not return a request for comment.

It didn't look like employees were too stressed by the appearance of the mysterious egg, or the presence of the bomb squad.