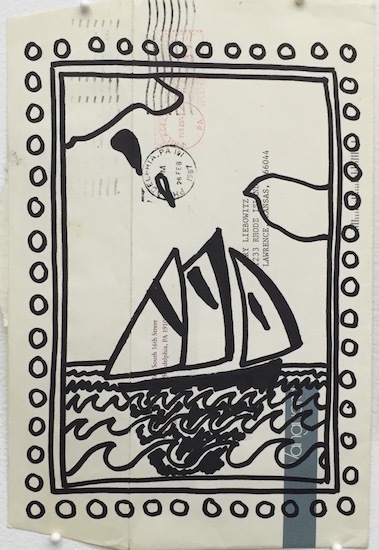 When gallery Invisible Exports had a last-minute vacancy for a show this month, Cary Leibowitz aka Candyass saved the day by scavenging his basement storage for a box of paintings he made in his early 20s. The resulting show, which plays with classic art genres and the tension between high and low, is ravishing. Leibowitz would probably cringe to hear it described as such. He implores viewers, "please do not say anything is beautiful. Dumb and ugly and ordinary will be lovely (viva Venturi!)"

Even without this exhortation, describing Cary Leibowitz's drawings feels too much like ruining a joke by explaining it. It's even harder still, to describe the old fashioned painterly joy I feel when I spend time in the gallery looking at Cary's loose brushwork, offhand compositions and moody atmospheric washes. Taken as a whole, this conglomerate flickers back and forth between wit and sincerity in a way that can't and needn't be pinned down.

And it is in this spirit that I share with you some of my favorite discoveries about Leibowitz, the artist and Candyass, his nom de brosse as well some loose impressions of the show at Invisible Exports.

Many recent art school grads fall into a Slough of Despond from which they never surface to ever wield a paintbrush again. I was there, mired in my own muck, grinding it out for years in my twenties. Cary Leibowitz, on the other hand, seemingly doggy paddled his way out of the Slough before it could permanently submerge him. Once safely back at home, he settled himself on a sofa, turned on daytime television and made paintings on his coffee table during commercial breaks.

He may have escaped the hopeless despair. Yet from speaking to Leibowitz, I sense that the feeling of connection to the wider world of art didn't come easily for him even with Nipsey Russell's funny poems during episodes of Hollywood Squares as background accompaniment. 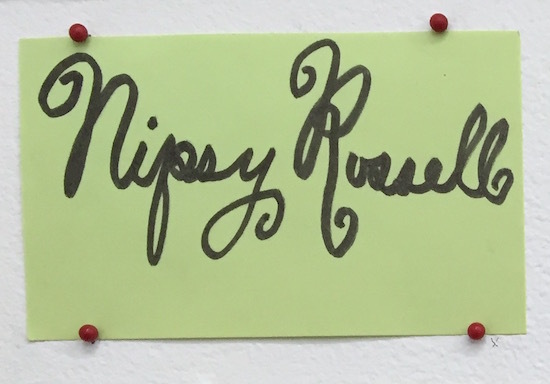 Great art is often due in part to the time an artist spends talking to himself in the corner, finding his voice and strengthening it. Candyass's sofa and daytime television-trained voice helped him to establish himself as a loser art pioneer. Leibowitz's nom de brosse Candyass was coalescing, yet Leibowitz couldn't feel his upcoming fame lurking right around the corner. 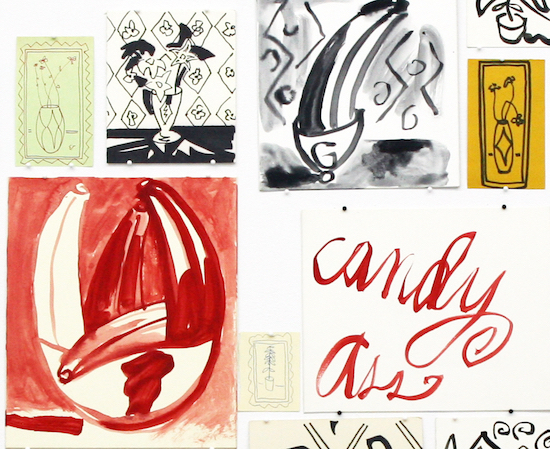 I think of the paintings on display at Invisible Exports as being good luck charms, something you can buy and hang as a reminder that even if you are feeling stuck in a crucible, keep moving forward and things will turn out okay - even s'wunderful.

Leibowitz, always a gentleman, has modestly priced these paintings in line with his multiples series, so they can be bought in groups for maximum effect. I think it's important to buy art that you like. As a result, I've spent a couple hours at Invisible-Exports trying to select a good luck charm or two for myself, and there were so many I liked I became overwhelmed. Leibowitz has taken a handful of subjects and painted them repeatedly in mini-series with seemingly endless inventiveness. How to make sense of these pieces and their groupings? 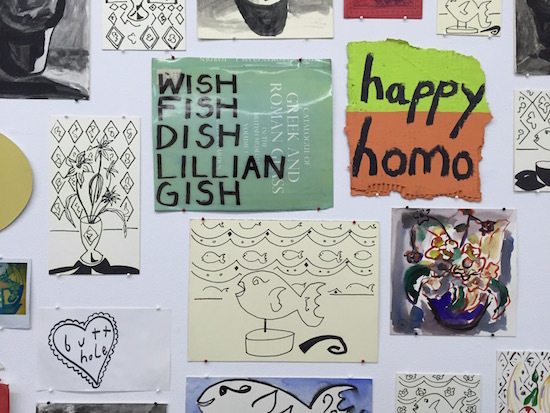 This is an intellectual grouping. Rhyming words go with assonant images. Lillian Gish was a silent screen star who owned the hotel in Beverley Hills now known as Maison 140...but Candyass might be too busy singing Wish Fish Dish Lillian Gish to go there. 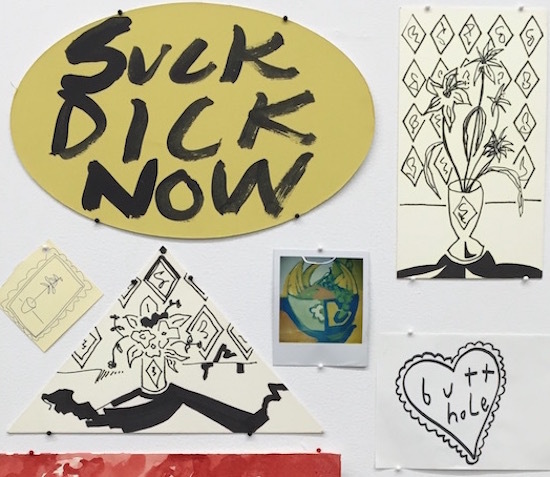 Different shapes and colors make for a cheery grouping.

If this is truly a litmus test strip, this butthole is slightly acidic. Notably, it's also the only butthole drawing that doesn't have a ruffly border. This butthole stands alone. 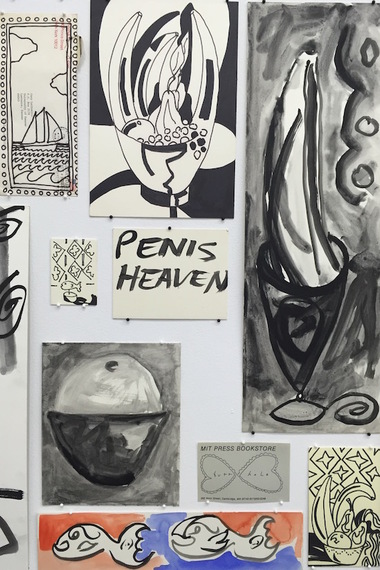 Bowls of fruit, fish on sticks, smarty pants butthole butterflies - it's altogether penis heaven if you hang five or more together. 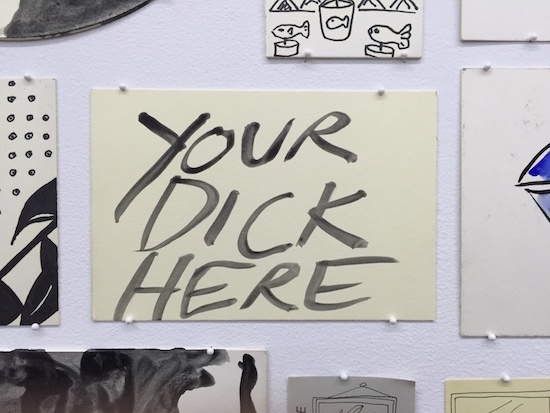 Once you verify the ink is waterproof. 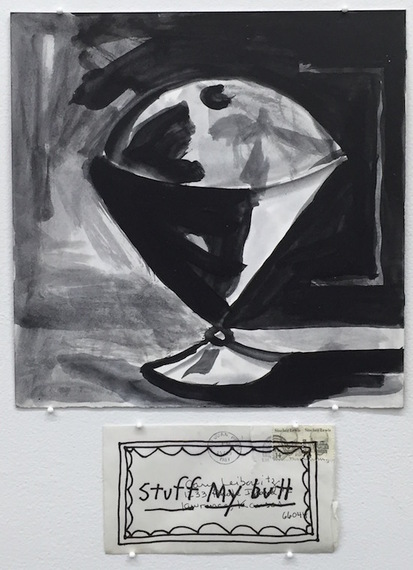 There are many navel oranges in cups in the show, but this is the only one melting like a scoop of ice cream. 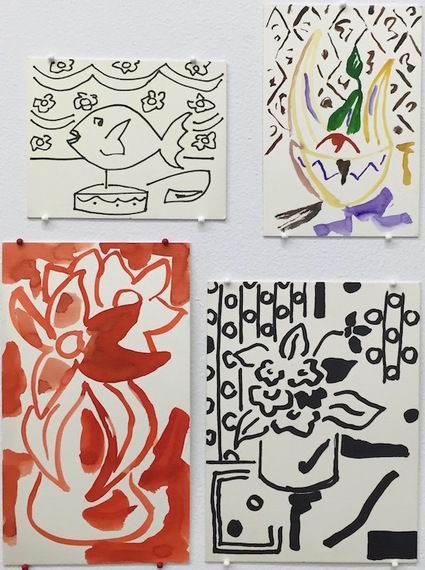 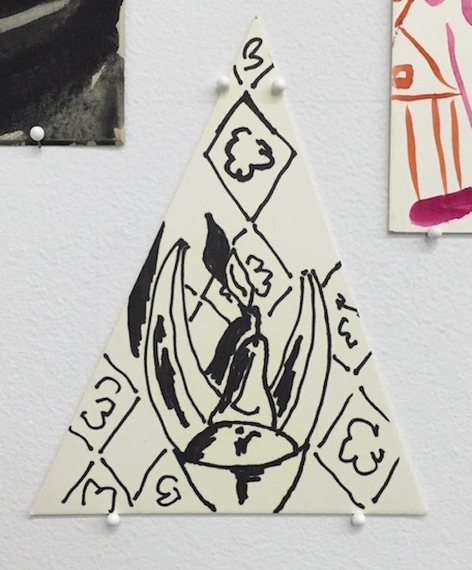 It's erect fruit, it's a triangle. The 80's were younger days.

In many pairings, it becomes clear that Candyass has a potty mouth, but is too polite to use curse words.

All images courtesy the artist and Invisible-Exports.