With so much talk of late about cupcakes and legalizing marijuana, we should have known a Cannabis Cupcakes cookbook wasn't too far behind. "What better way to take advantage of both [the cupcake and cannabis] trends than with a cookbook that satisfies these guilty pleasures?," the cookbook's press release asks. Well, the publisher has a point.

Other fun nuggets from the press release? "Not only is the high from eating cannabis baked goods more intense and longer-lasting (THC is more potent when dissolved in fat), it's also a healthier and tastier way to get stoned." We're pretty sure those health claims have not been FDA approved, nor have we heard many restaurant critics rave over marijuana-spiked French pastries. Then again, this is a baking book that specializes in all-American "quarter-pounders" in pot cupcake form.

Should you be curious, those spiked "cupcake burgers" are assembled from mini buttermilk cakes (the buns) and chocolate "burger" cake patties, then decorated with piles of colored powdered sugar icing (lettuce, tomatoes, mustard). Not exactly the Valhrona chocolate truffles were hoping would appear in round two after flipping through Baked!, a pot baking book also written by Chris Stone a few years ago. But hey, those pot cupcake "burgers" also include a Nutella filling -- a definite improvement from usual Betty Crocker boxed mix pot brownie. 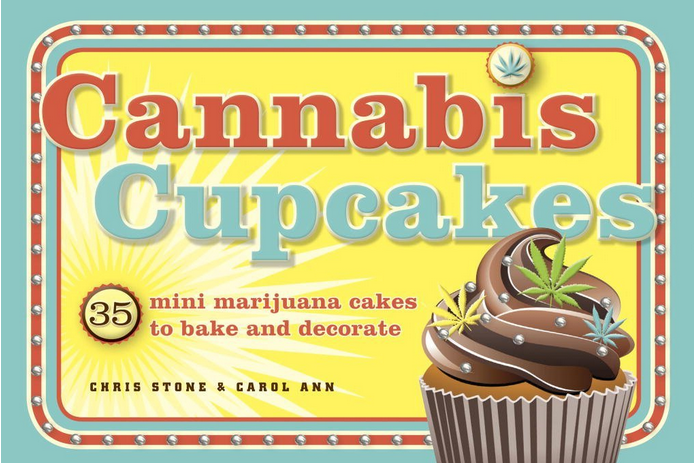 Stone, a frequent pot author and grower with a handy last name, co-wrote his latest book with "Carol Ann" (a pseudonym). She is described as a food writer "who specializes in cupcakes and desserts" on the book jacket flap. And one who can now add "pot recipe testing" to her resume. Oh, the career possibilities today.

Like Baked!, the recipes in Stone's current book rely heavily on pot-enhanced butter ("boosted butter") or vegetable oil ("souped-up safflower oil"), the same basic components found in other pot baking recipes (the things you learn as a cookbook reviewer). Once you have your spiked butter or oil in hand, Stone and "Carol Ann" lead you through the steps to make variations like espresso-spiked cupcakes with coffee buttercream, chocolate-chili cupcakes with butterscotch cream icing, and thirty or so other variations.

Hard core Bake It Like You Mean It types, if you are reading this review (and we suspect you are not), should note that there are a few recipe quirks. Those chocolate-chili cupcakes, for instance, call for prepared chili-spiced chocolate bars rather than baking chocolate and, say, a half teaspoon of chili powder. We're having a hard time picturing afternoon "high" enthusiasts making a special trip to Trader Joe's (and elsewhere) to find chili-spiced chocolate bars for a recipe. Then again, maybe that's why TJ's employees always seem so damn happy.

Speaking of, should you be anticipating a particularly bad workday ahead, there are also plenty of recipes for pot breakfast muffins to stock up on (we suspect they freeze well). Among them: cinnamon-blueberry, spiced apricot, banana-walnut-banana cream and an apple crisp muffin. Craving something with nuts? You're in luck. A chapter focusing on nuts includes recipes for maple-pecan cupcakes, peanut butter muffins and "pirate cupcakes" with marzipan and almonds that begins with this intro: "Rumor has it these were Blackbeard's favorite snack, but he always used to get the crumbs stuck in his whiskers."

A joke, we can only presume, that is best read when high. On cupcakes.