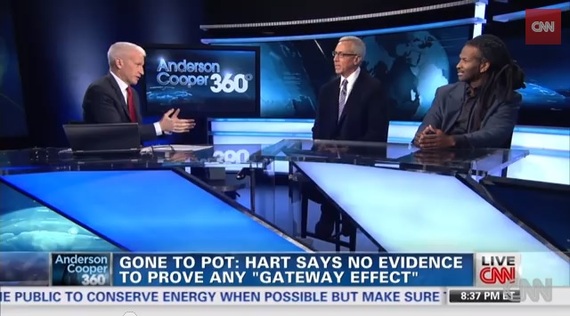 Recently, on a segment with Anderson Cooper on CNN that aired one week into the overall excitement after legal adult cannabis sales had started in Colorado, famed addiction medicine specialist Dr. Drew Pinsky expressed shock about the oft-cited figure that 1 in 11 people who ever use cannabis becomes dependent. In a moderated conversation with renowned Columbia psychopharmacologist Dr. Carl Hart, Dr. Drew noted that cannabis dependence is "very uncommon" and stated, "They said 1 in 11; it's nowhere near that." By "they" he is likely referring to the establishment, headed up by the National Institute on Drug Abuse (NIDA), the federal drug abuse research institute, and related federal agencies. This figure for cannabis dependence prevalence has been around for some time and is often accepted as objective fact and widely reported. It was even used by Dr. Sanjay Gupta in that famous piece on CNN.com in which he apologized for misleading the public on the harms of cannabis while underplaying and ignoring its medicinal benefits. Dr. Gupta writes matter-of-factly, "We now know that while estimates vary, marijuana leads to dependence in around 9 to 10% of its adult users."

Do we really "now know" this? Where does this figure come from? And how good is the science behind it? Pretty lousy, it turns out.

The origin of this figure is indeed NIDA research first published in a 1994 article in the journal Experimental and Clinical Psychopharmacology.

Researchers sought to use data from a national government-funded survey called the National Comorbidity Survey to estimate the prevalence of drug dependence by drug type. It sounds like a reasonable plan, except that if the measuring stick that you are using is flawed, the measurements will be flawed as well.

The survey was based on diagnostic definitions for cannabis dependence that were published in 1987 in the Diagnostic and Statistical Manual (3rd edition, revised) put out by the American Psychiatric Association. This manual has an inherent bias against non-problematic cannabis use and privileges the normalcy of alcohol use. In its introduction to the section "Psychoactive Substance Use Disorders," it notes:

These conditions are here conceptualized as mental disorders, and are therefore to be distinguished from nonpathological psychoactive substance use, such as the moderate imbibing of alcohol....

For example, social drinking frequently causes loquacity, euphoria, and slurred speech; but this should not be considered Intoxication unless maladaptive behavior, such as fighting, impaired judgment, or impaired social or occupational functioning, results.

Note how much effort is put into selectively polishing the appearance of an alcohol user, even one who is slurrrring wordssss!

Back to the survey. One hundred fifty-eight professional field staff of the Survey Research Center at the University of Michigan, after seven days of training in how to conduct structured interviews, carried out the surveys between Sept. 14, 1990, and Feb. 6, 1992. The sample consisted of 8,098 subjects between the ages of 15 and 54, residing across the lower 48 states. Regarding use frequency and pathology, research was conducted "under the assumption that even as few as six occasions might be sufficient for development of drug dependence."

A respondent would get a diagnosis of cannabis dependence if at least three of the following statements regarding their cannabis use applied to them in at least a one-month period:

(5) important social, occupational, or recreational activities given up or reduced because of use

(6) continued use despite knowledge of having a persistent or recurrent social, psychological, or physical problem that is caused or exacerbated by use

The problem is that these criteria are chock-full of bias that ignore the reality of non-problematic or beneficial cannabis use. In the early '90s in the U.S., all cannabis use was seen as illegal, even for medicinal purposes. Cannabis use could be causing problems for a subject more because of its illegality than anything else, and this is not accounted for in the measuring tool.

Let's look at some of these criteria in greater detail. Criterion 3 could be accounted for solely by the fact that cannabis is prohibited and therefore is unavailable for local or home production or distribution, necessitating more time and work to obtain it. Furthermore, if cannabis is being used medicinally or therapeutically, it could certainly be the case that "it was taken in larger amounts or over a longer period than intended" (criterion 1), or that it could lead to a "need for markedly increased amounts" (criterion 7). Often, individuals "discover" the therapeutic benefits of cannabis after initially intending to be consume it sparingly under an environment of prohibition. Once this therapeutic discovery is made, more cannabis will be needed than was previously intended. Moreover, one may go to greater lengths to obtain it, similar to the lengths that people may go to in order to obtain any good medicine, even if the medicinal benefit is palliative rather than curative, or complementary rather than central. Given the environment of prohibition and the importance of the consumption to the maintenance of one's health, the time and effort involved in procurement may cut into time that could be used for doing other activities, such as those enumerated in criterion 5. Certainly, given the prevalence of employment drug testing and legal consequences related to being caught with cannabis, it would not be surprising that cannabis use, by virtue of its illegality alone, could cause "a persistent or recurrent social ... problem" (criterion 6) or lead to giving up "important ... occupational ... activities" (criterion 5).

Because all of this was summarily ignored, subjects who were not cannabis-dependent were likely counted as such, and it is not surprising that they arrived at an inflated figure of 9.1 percent (plus or minus 0.7 percent), or approximately 1 in 11 people, for the prevalence of cannabis dependency among self-identified cannabis users. The latter figure is itself problematic given that it's illegal behavior that you may not want to tell a stranger about, even if they are a surveyor. This causes an artificially low denominator, which would also hike up the figure.

That's why this idea that 9 percent of cannabis users become dependent is based on bad science and is way over the mark. As Dr. Drew says, "it's nowhere near that." Now let's see how long this false factoid continues to be repeated in the media echo chamber.