Cannes kicked off with a gentle, sweet even sublime film: Pixar's Up. As I've written before, Pixar is on a streak of critical and commercial successes (10 and counting) that is simply unparalleled in Hollywood history. No star, no director, no studio has ever accomplished what Pixar has wrought with its first ten movies. They range from pretty good to good to great to classic. And every single one has been a major commercial success. Just listing them is impressive: 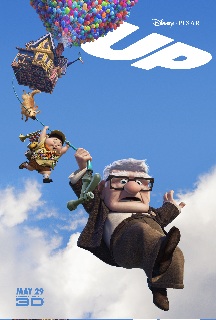 Up. It has some fine action scenes and witty banter involving dogs equipped with hi-tech collars that let us hear their thoughts. ("Squirrel!" is a big favorite.) But the lasting impression of this gem is gentle and sweet. No wonder the filmmakers genuflected at the altar of Hiyao Miyazaki, the great Japanese animation genius. His sensibility suffuses everything they do.

The story is simple enough: Carl, a grumpy old man (Ed Asner) tries to get away from it all by tying a ton of helium balloons to his home and floating off to South America. But there's a stowaway: a genial 8 year old kid desperate to earn his final merit badge by "assisting the elderly." Adventures ensue.

Director Pete Docter (whose long face and jug ears make him look pleasingly cartoonish himself) mentioned the Pixar concept of "Simplexity" at the film's press conference. That's the idea that something -- a character, a storyline, an image -- should be easy to grasp at first but have enough depth and texture that you keep discovering new things every time you return to it.

But even on first viewing you'll be caught up short by the serene opening. They break your heart in the first ten minutes...twice. In those ten minutes, we see Carl as a shy, almost mute little boy happily overwhelmed by Elie (voiced by Elie Docter). Her love for famed explorer Charles Muntz (Christopher Plummer) is even greater than his own. In a brilliant, nearly silent sequence, we see them grow up, get married, share their dreams, suffer the pain of their inability to have children, grow old together and then sadly say goodbye when Ellie dies. It's a master class in storytelling and the movie proper hasn't even begun.

But of course it has, because in a great film nothing is extraneous. Those first few minutes set up the driving desire to see the wilds of South America, cannily explain why explorer Muntz might still be there decades later trying to clear his name, prepare us for an oddball bird nicknamed Kevin that is boisterously antic and sweet (they don't make movies to sell toys but boy could Disney sell a ton of "Kevins"), and a dark, dangerous finale.

I haven't even mentioned yet the fact that the film is in 3-D, something that should please Pixar to no end. This is a landmark year for 3-D: Up and Coraline will be remembered for being the movies that turned 3-D from a gimmick into simply another tool, like sound and color. Their use of 3-D is so deft, so organic to the story that it seems perfectly natural. That's something 3-D has never seemed before.

I'm not convinced that 3-D will become standard for live action films. Mostly, it seems like an excuse by studios to raise ticket prices. But in animation, 3-D will probably become the standard. People will still make 2-D animation and they'll still do hand-drawn animation as well, just like people sometimes make movies in black and white. But 3-D is already becoming so common that no one thinks it notable or special or strange. If the movie's good, it uses 3-D well. If it's bad, 3-D won't help it. With Up, the 3-D is so essential to the emotional effect of the film, I'd hate to watch it in 2-D, at least for the first time. You'd certainly enjoy it. But you wouldn't know what you were missing. And Up in 3-D should not be missed.