The 2011 Cannes Film Festival starts Wednesday, kicking off ten days of movie, party and celebrity gluttony. That's why I cut "party" and "celebrity" from my diet so I can focus on movies and stay in fighting trim and deliver the quickest and best reviews to you throughout the fest. Watching movies from 8:30 in the morning to 2 in the morning (more often just midnight) ain't easy but it sure is fun. Of course, celebrities aren't so bad either; check out a striking young Faye Dunaway in
the official poster. 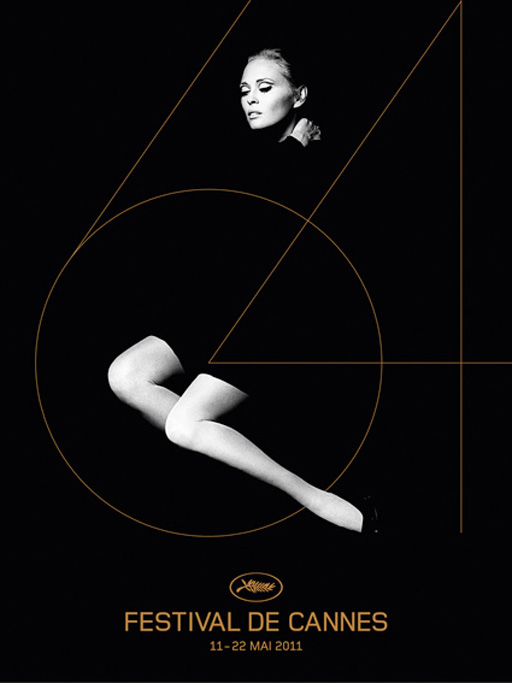 The opening and closing films at most film festivals are dire affairs and Cannes is usually no exception. In recent years, they've made an effort to up the ante on these honorary films, which usually just fill a function like giving the hometown crowd a movie to cheer (the Competition isn't always filled with French films) or bringing in some stars and quality be damned. This year they might just surprise us.

Woody Allen opens the fest with Midnight In Paris. Woody is practically an honorary Frenchman anyway, so that ticks off the French box; plus the film is set in Paris, which ticks off the French box again; and finally it features stars like Owen Wilson, Rachel McAdams, Marion Cotillard and most importantly of all Carla Bruni. Who? She's a pop singer and the wife of Nicolas Sarkozy, the leader of the country. That means their President will be in attendance on opening night, which promises to bring not just glamour but power to Cannes as well. Magnifique! Sarkozy will almost certainly not stay in town to watch the presumably blistering documentary about him that will also unspool at the fest. In fact, he might just draw boos, since his poll numbers are at record lows and if the elections were held today he wouldn't even make it to the final round of voting. As for quality, Woody has been hit and (mostly) miss for the past two decades but some decent films have slipped through. Maybe we'll get lucky; the trailer is pretty cute in a modest sort of way.

The closing night film is much more likely to deliver the goods. Young director Christophe Honore will debut Les bien-aimes, a new musical starring Ludivine Sagnier, director Milos Forman in an acting role and the great Catherine Deneuve. Honore is a serious young talent and his last musical -- Love Songs -- was greatly admired in France. It got little attention in the US but Deneuve told me the English subtitling was ruinous and spoiled the wit and subtlety of the lyrics. (Hey, if you can't name-drop Deneuve, you're not at Cannes.)

Here's a rundown of some of the other main events to look forward to at Cannes this year.

JOHNNY DEPP -- He's here touting Pirates of the Caribbean: On Stranger Tides. But the film buffs who descend on Cannes are more likely to be excited by a new project he and Pirates director Rob Marshall are developing: a remake of the classic mystery franchise The Thin Man. (Maybe Keith Richards can give him some pointers on how to hold his liquor because the detectives Nick & Nora in those movies really pound 'em back.)

THE TREE OF LIFE -- Pirates already had its world premiere in Los Angeles, so it's coming to Cannes to take advantage of the international press in attendance. Still, that does remove some of the fun when people in the US get to see a film at Cannes on the same day or even earlier; why fly all this way? The same will technically be true for The Tree Of Life, which will screen in North America at the exact same time the movie makes its official world premiere at Cannes. (Critics in Cannes will get to see it almost 12 hours earlier during the 8:30 am press screening.) Still director Terrence Malick is a major talent and four for four in my book with Badlands, Days Of Heaven, The Thin Red Line and The New World. So I'm excited to watch this look at childhood and suburbia in the 1950s that stars Brad Pitt and Sean Penn. Plus, it's a bold move to open Malick during the summer movie season, so here's hoping the gamble pays off. Sean Penn is also at Cannes with This Must Be The Place, an oddball movie about a retired rock star who is hunting down the ex-Nazi that executed his dad. Strange, but it's from the Italian director of Il Divo, one of my favorites a few Cannes ago, so I'm intrigued.

THE DARDENNE BROTHERS -- If you're a serious movie buff, the Dardenne brothers are even more important to you than the Coen brothers. The Dardennes have produced some of the most exciting cinema in the last 15 years, including La Promesse and L'Enfant. I was a little disappointed in their last movie Lorna's Silence. But hey, nobody's perfect! (Quick, name that film I'm quoting!) Their new movie is The Boy With The Bicycle and like the Coens, any film they bring to Cannes is an immediate front-runne for an award.

KUNG FU PANDA 2 -- I thought the original Kung Fu Panda was a very pleasant surprise and featured some of the best action scenes of the year. (Truly.) The original didn't screen at Cannes but it did bring some razzle dazzle to the fest with a crazy stunt and Jack Black, who is a crazy stunt all on his own. Throw in Angelina Jolie, Jackie Chan and Dustin Hoffman (didn't he die in the first one?) and you've got a frenzied group of photographers waiting with baited breath. Like so many other franchises, KFP2 is here to beat the drum of publicity. It worked for Shrek and The Lord of the Rings and many other major flicks. If KFP2 is as good as the first, I'm just sorry it's not screening out of competition. The timing would have been right since the movie opens in the US on May 26. Here's the trailer, which is promising if you enjoyed the original.

TILDA SWINTON -- Few artists are so strikingly attractive and so smart as Tilda Swinton. The patron saint of truly independent filmmaking, Swinton is at the fest with We Need To Talk About Kevin. This film is a major step up to the plate for director Lynne Ramsay (Morvern Callar, Ratcatcher). Ramsay has specialized in grim material and this is no exception: it's the story of a school shooting in the US, with Swinton playing the mother of the killer. The book was a massive bestseller in the UK so it's got a high profile there and Swinton's role is juicy: we see her problematic relationship with her son from birth through the shooting and beyond. It's a combination of A Cry In The Dark (where Meryl Streep's character was pilloried by the Aussie media for not spilling out her emotions to them) and Gus Van Sant's Elephant. I've read the book and if they can nail the ending, it's going to be terrific. Swinton is perfect for the complex, even unlikable (or at least unsympathetic) mother, though in fact she's very sympathetic as she struggles to come to grips with being a mother and having a child she literally can't relate to from the start. If it works, both Swinton and Ezra Miller as Kevin are sure to be Oscar hopefuls.

ALMODOVAR AND BANDERAS -- Pedro Almodovar is a longtime favorite of Cannes and returns again and again. But somehow he's never been in Competition at the right time with the right movie to win the Palme d'Or. Of course, he'd like one. Almodovar's new movie is a grim, gothic affair akin to Korea's Oldboy. It's a bit out of his comfort zone, but having read the novel by Thierry Jonquet I can see what drew him in. Better still, it reunites him with Antonio Banderas, who starred in so many of Almodovar's best. To me, the project seems more commercial and less Cannes-appropriate but it all depends on the execution of course.

RYAN GOSLING -- Gosling is simply one of the best actors working today and at Cannes he's paired with the wunderkind Nicolas Winding Refn on Drive. Refn was behind the arthouse favorite Pusher trilogy and the nutty Valhalla Rising. (If Tarkovsky had made a Viking movie, it would have been like Valhalla Rising.) Now Refn has plunged into Hollywood with the story of a movie stuntman who moonlights as a wheelman for criminals; Gosling gets targeted for killing after a job goes bad. It costars Carey Mulligan, Christina Hendricks of Mad Men and Bryan Cranston of Breaking Bad. Drive has the potential to be an artistic and commercial breakthrough for everyone involved. I'll definitely be reading the novel by James Sallis that it's based on before the movie debuts on May 19.

With hundreds of movies screening in various markets and competitions like Directors Fortnight and Critics Week, I've only scratched the surface. Lars Von Trier is sure to stir up trouble if he can with his valentine to the end of the world. Gus Van Sant is back with Restless. Wu Xia aka Dragon could be martial arts fun, along with the latest Takashi Miike. I couldn't find a copy of the graphic novel/memoir Drifting Life, but the animated film Tatsumi could be a treat as it celebrates the life of Yoshihiro Tatsumi, the artist who revolutionized manga. Kim Ki-Duk. Joseph Cedar. Aki Kaurismaki. Hong Sangsoo. Bruno Dumont. And heck, I forgot to mention Nanni Moretti. His new movie -- We Have A Pope! -- is about a reluctant Pope who freaks out over his new job and starts seeing a therapist/psychologist. Think of it as Robert de Niro's Analyze This, but with more praying and a lot less cursing. (I assume.) De Niro, by the way, heads the jury but that doesn't really matter to journalists. Except for a boring press conference where jury members say they're looking forward to watching a lot of movies, they're not heard from again until they make their quixotic choices at the end of the fest.

Keep coming back daily for more coverage of Cannes.

Thanks for reading. Michael Giltz is the cohost of Showbiz Sandbox, a weekly pop culture podcast that reveals the industry take on entertainment news of the day and features top journalists and opinion makers as guests. It's available free on iTunes. Visit Michael Giltz at his website and his daily blog. Download his podcast of celebrity interviews and his radio show, also called Popsurfing and also available for free on iTunes. Link to him on Netflix and gain access to thousands of ratings and reviews.