I never thought I would have Isabelle Huppert burn-out, considering she is a favorite actress, but Hong Sangsoo's new film In Another Country , here at Cannes, drove me to the limit. A postmodern story in which Isabelle Huppert plays three different, but similar, women who go through a similar but different story in a South Korean beach town, a common refrain, uttered by all the Korean characters, with great deference, is: "You are so beautiful!" with Isabelle's character (whichever of the three) smiling modestly in response. The camera follows Isabelle as she traipses girlishly (yes, beautiful) in her red dress, then as she traipses in her green dress. Everyone falls in love with her. She is beautiful. 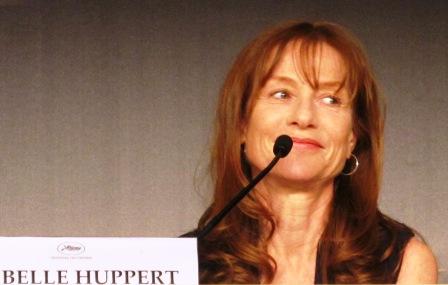 Hong Sangsoo's point in this story, as Isabelle Huppert told us at an intimate press conference, is to be "poetic:" to create a sense of the same photo being taken several times, quickly, but slightly off each time. For example, in each of the three stories, she is looking for a lighthouse, and flirts gaily with a lifeguard.

"By repeating something, it becomes something else," Huppert said. "It is a movie not about fullness, but about emptiness. Everything is not finished, not completed."

Hong Sangsoo commented: "In this film, I want the emphasis to be on things themselves, separated from the person. Usually we connect gestures with the person; I wanted concentration on the gesture itself."

An interesting proposition, but I could not get the fetish for Isabelle Huppert out of sight long enough to reflect on this more poetic side.

I asked Hong why the film is dominated by the issue of a foreign woman.

He looked at me, as if I had asked a non-sequitur. "Foreign woman?"

"The center of the film is the beautiful European."

"No, it is Isabelle Huppert. The film began because of her. The story developed because I wanted to make a film with her."

Later I ran into my German colleague Alex, hobbling down the escalator of the Palais.

"Please don't ask me what happened," he said, hopping on one foot.

"I was running out of the Hong Sangsoo movie, right when that second story with Isabelle Huppert began, and you know they have those stairs with the red line on the carpet -- just that little step -- and as I ran, I tripped -- well here it is, I sprained my ankle! Don't worry, it's not broken."