How can one not enjoy a movie in which one scene has Tilda Swinton and Tom Hiddleston, two vampire lovers, sitting in a dilapidated Detroit home, playing chess and drinking blood popsicles, all this to a cool soundtrack put together by Jim Jarmusch and his collaborator Josef van Wissem?

Jarmusch's Only Lovers Left Alive is a masterpiece of fun. The story takes place in two evocative settings: Tangier, where Eve (Swinton) wanders the ancient streets in slow motion, wearing beige silk that swings with her long vampirish hair, and Detroit, where her life-long lover Adam (Hiddleston), a musician, hangs out listening to vinyl records and composing on his many stringed instruments, while awaiting his blood supplies. We also have a third character in Tangier, a cultivated old man named Marlowe (John Hurt), who perhaps is actually Shakespeare. 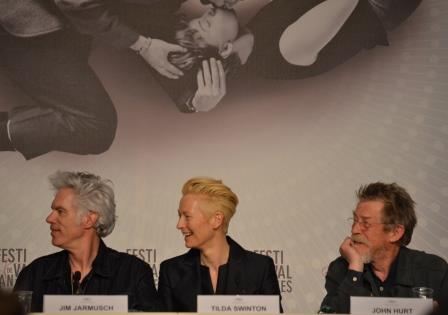 The actual story is slim, but the movie is rich in allusions to literature, science, and music, as these zombies are afficionados of the arts. When Eve and Adam book a plane ticket (noting to the agent that they only travel at night), they register as Daisy Buchanan and Stephen Dedalus. Unusual for a vampire movie, the two also banter about the surreal druggy monster world of Mary Wollstonecraft and Percy Shelley, giving homage to their literary antecedents.

"It's refreshing," one journalist said after the screening.

And zany. In terms of craft, the camera angles are funky and wild, with ever-so-often an overhead zoom on the vampires as they relax in bohemian contemplation on the couch, or toast each other with blood champagne.

The hypnotic shot that begins the movie: an overhead on a spinning vinyl record, initiating us on the roller coaster of music that will ensue. In fact, what gives the movie its force is the soundtrack, which culminates in a stunning performance in a Tangier bar by the Lebanese singer Yasmine Hamdan. The vampires, on a hunt for blood, stop to peep at this beautiful singer as she dances and sings, waving her highly-toned arms and wearing a sparkling spangled belt, a surprise image in the misty Moroccan night.

These sublime moments of art celebration is all the film seems to be about, to be honest, despite the press kit that tells us that this film is about marginality in our decadent 2lst century, with the vampires symbolizing the boheme. But sometimes that is all one wants in a film: musical and visual pleasure.

The idiosyncratic cultural references are a pleasure as well. 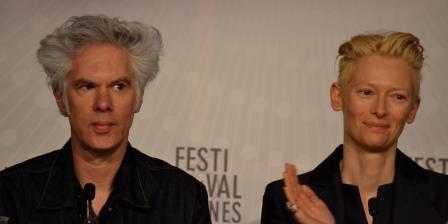 In person, Jim Jarmusch shows--aside from his handsome stature and his famous white hair--the same impressive breadth of knowledge. Asked during the press conference whether he likes YouTube, he responded, in a flash:

"I love YouTube. I love the idea that you can watch a performance from the 1950s of Merle Haggard, then a lecture on mycology and mushroom identification by John Cage, then a clip of the Steve Allen tv show with young Frank Zappa playing a bicycle as a musical instrument and then watch how a flying squirrel moves through space."

Put that encyclopedic prowess to music--with a couple of vampires--and you get the experience of Only Lovers Left Alive.